role models can be very important to a boy

Alternatively, I can imagine today that when I was 11 and watching RoboCop for the first time what really mattered was watching Murphy overcome his RoboCop programming and be his own person.

At least inasmuch as he does. He can barely access his memories, and in the end he still has to go be a supercop because the regularly police are on strike. 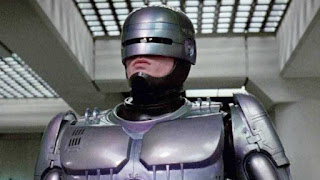 It would be another few years before I openly turned against my religious upbringing but already I'm sure I was having issues with it. I'm entering the 7th grade in the fall. This is the year that I write my infamous essay about how I only believe in God because I've been told to do so my whole life and my Bible Class teacher is not a fan. Or was that 9th grade? I'm losing track. Getting old. But, I've got James Murphy to look up to. Or I did once upon a time a few decades ago. Shiny. Cybernetic. Wants to do what's right.


And, I want to say something about chewing gum, because it feels weird to me that both Lewis (in at least one notable scene) and Boddiker (in several scenes) chew gum. Like there's some symbolism there. And, I want to say more about RoboCop as some rebel hero. But, you know, I think I'm done with RoboCop.
Posted by robert e g black at 8:10 PM