don't change to please others

The nerd and the cheerleader--a classic 80s setup. So many love stories cross class (and clique) divides; it's a variation on the Cinderella plot, of course. One party gets prettied up to be with the other. In Can't Buy Me Love, Ronald (Patrick Dempsey) pays for the makeover, and a month of pretend with Cindy (Amanda Peterson). Roger Ebert makes a point in his quite negative review about how these two are "materialistic twits" or at least make teenagers look like as much. But, as I bring up his review to see what he has to say, this exchange happens (as Ronald washes Cindy's car and she sits and watches):

CINDY
You know, when I offered you a ride home, it wasn't to get you to wash my car.

RONALD
I don't mind. Actually, I kind of like it.

CINDY
You're a hard worker. Work's not really my thing.

RONALD
Cheerleading's hard work. You do it well.

CINDY
I guess. But, what I mean is that I don't do much else... except for shop and hangout.

Cindy is self-aware. And, on their airplane graveyard date, she seems genuinely interested in what Ronald has to show her. And, when he uses money as the impulse for their fake breakup, she's the one who points out, accurately, "This isn't dignified" and asks him, "Would you show some maturity?"

To be fair, though, some of her dialogue is a bit too on-the-nose, too intelligent for most teenagers, let alone this particular one who is supposed to be a stereotypical movie cheerleader. She gets to tell us the point to the movie--that everybody has to work at being who they are. "Popularity isn't perfect." 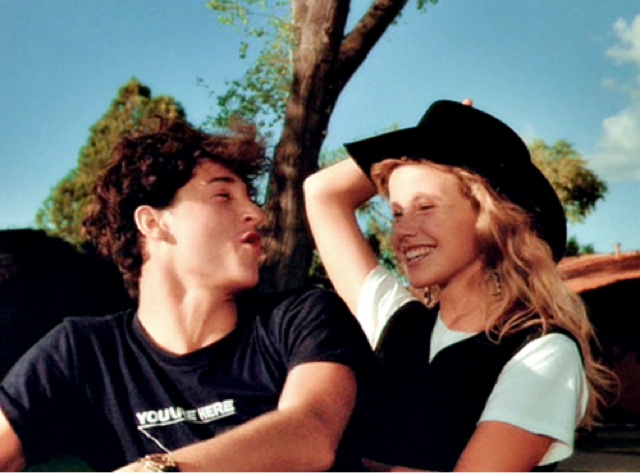 And, I find myself sitting here in the 1980s all over again. A place I have proven time and time again in this blog that I rather like. The hair can be a bit ridiculous, as can the clothes. Plus, the obsession with cliques... though I guess that survived into later high school movies as well.

It's fundamental to many a romantic comedy outside of high school, too. This idea that love knows no bounds; it can cross class lines, clique lines, go anywhere and do anything.

Plus, there's got to be a slow clap.

It's weird--I don't particularly like romantic comedies, but there are a few of them from the 80s and early 90s that I have seen many, many times. This one in particular is... not great. But, it is very much of its time and it works for what it is. And, I remember having a crush on Amanda Peterson when this movie came out and I was.... eleven. Now, as Wooderson might say, she stayed the same age (and it turns out, the actress died this past July), which is a strange.

But, that's one of those great things with movies you know from childhood or whenever--they can take you back to that time and it doesn't have to be about getting lost in the movie; it can just be about getting lost in memories of the time when you saw the movie the first time. I don't think 11-year-old me would have imagined me as I am now, a teacher, a father, watching movies every day... Well, he might have imagined that one.

Anyway, I don't know yet where this month is going, but I think it's going to linger for a bit in the 80s and 90s some more. We'll see.