the absence of signs

New month, gonna drift into a theme, start with a little romantic comedy, see where it takes me.

John Cusack, again (after Say Anything and Better Off Dead). Along with Kate Beckinsale this time. The movie is Serendipity and it starts with an extended meet-cute first date, except Sara (Beckinsale) believes in fate and thinks if they're meant to be together, the universe will make it happen. Ultimately, she gets him to write his name and number on a $5 bill then spends it and writes her own name and number in a copy of Love in the Time of Cholera and promises to sell it to a used bookstore the next morning--the idea is, if either of them find that number, they will find one another. 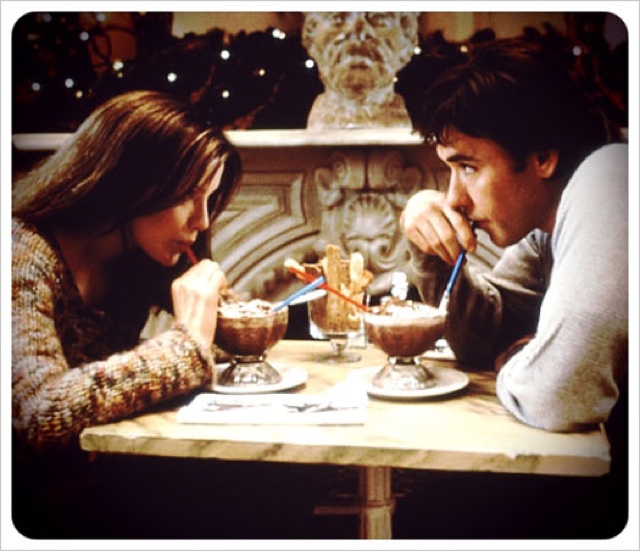 But, then the film jumps ahead in time--Jonathan's (Cusack) engagement party.

Now, aside from the Love in the Time of Cholera reference (though I haven't read the book--I know, what's wrong with me?--I understand there's something in there about a return to long lost love after many years apart), they also passed an ad for Six Degrees of Separation--never seen the play, but I saw the movie and know the concept we all get from that title, that we are all just six degrees away from everybody else. If Jonathan or Sara had mentioned what they do for a living, today they could probably find each other online in no time. In 2001, though, that wasn't so easy with just a first name.

Plus, years past that night they spent together, Sara, now in San Francisco, no longer believes in fate. And, she just got engaged herself. Her fiancé Lars (John Corbett) does a nice befitting-of-a-movie proposal, Russian nesting doll-style gift boxes down to a ring (sort of), then immediately departs to talk to his manager to schedule their honeymoon around his music your... translate this to, Lars is a bit of a dick, even if he is romantic.

Back in New York, Jonathan's fiancée Halley (Bridget Moynahan) is demanding--she wants him to say something romantic like she's the only girl in the universe for him--and inattentive--she doesn't notice that he didn't actually get his hair cut--then she's off to yell at the building superintendent over a beeping... smoke detector, I guess it was; I was too busy noticing how the scene was manipulating us to dislike Halley when she actually didn't seem all that bad.

(Sidenote: Jonathan's best friend Dean (Jeremy Piven) is awesome. For example, trying to convince a temp at the leasing office of the building where Sara used to live to give them information, he goes on a nice rant... After Jonathan sets it up by saying privacy laws protect millionaires, "You know who those millionaires are?" He tells Dean, "Tell him who they are. Tell him."

Kids your age. Pimple-faced college dropouts who have made unhealthy sums of money forming internet companies that create no concrete products, provide no viable services, and still manage to generate profits for all of its lazy day-trading son-of-a-bitch shareholders. Meanwhile, as a tortured member of the disenfranchised proletariat, you find some altruistic need to protect these digital plantation owners?

Sara's friend Eve (Molly Shannon) is pretty good, too, just going on a shorter rant about the universe:

And if you're smart enough, you learn from your mistakes. You figure it out. You... You think. You realize that life isn't some elaborate stage play with directions for the actors. Life's a mess, Sara. It's... It's chaos personified.

Can't give all the good material to the leads, of course.)

So, as I was typing all that, it turned out that Eve and Halley know each other from school. See, Jonathan and Sara are only three degrees of separation from one another.

And now, Halley is being bitchy again. This script does not want us to like her.

The cheesy music is a bit manipulative, too. But, I love the structure of this movie; it absolutely embraces the titular theme and all the near misses between Sara and Jonathan. I mean, now Jonathan is flying to San Francisco to find Sara but she's in New York right now. This movie is like all the obstacles from every other romantic comedy got together and shoved themselves between Jonathan and Sara just to prove definitively that love is some powerful force that pulls together people who are perfect for each other. The kind of thing that movies rely on.

(Continuing that note from before, Dean is still awesome because he writes obituaries--that's not why he's awesome--and wrote this instead of a best man toast:

Jonathan Trager, prominent television producer for ESPN, died last night from complications of losing his soulmate and his fiancée. He was 35 years old. Soft-spoken and obsessive, Trager never looked the part of a hopeless romantic. But, in the final days of his life, he revealed an unknown side of his psyche. This hidden quasi-Jungian persona surfaced during the Agatha Christie-lke pursuit of his long-reputed soulmate, a woman whom he only spent a few previous hours with. Sadly, the protracted search ended late Saturday night in complete and utter failure. Yet even in certain defeat, the courageous Trager secretly clung to the belief that life is not merely a series of meaningless accidents or coincidences. Uh-uh. But rather, its a tapestry of events that culminate in an exquisite, sublime plan. Asked about the loss of his dear friend, Dean Kansky, the Pulitzer Prize-winning author and executive editor of the New York Times, described Jonathan as a changed man in the last days of his life. "Things were clearer for him," Kansky noted. Ultimately, Jonathan concluded that if we are to live life in harmony with the universe, we must all possess a powerful faith in what the ancients used to call "fatum," what we currently refer to as destiny.

It's a nice idea--no meaningless accidents--except what about the bad things that happen? Take the logic too far and you gotta wonder if we deserve everything bad that happens to us. Cosmic Karma... Wait, wouldn't that just be Karma? But, that doesn't make sense in context of this story because Sara dumped Lars and Jonathan cancelled his wedding to Halley at the last minute, and sure, the movie never shows either of those characters again, but my curse is, perhaps, that I feel for those two. They don't even exist and I'm imagining them trying to get their lives back together.

You know, all that pain left in the wake of Sara and Jonathan obsessing over each other for seven years.