To counter yesterday's Katniss Everdeen, we have Ava (Alicia Vikander) in Ex Machina. Literally programmed to be who she is, Ava demonstrates more agency in one film than Katniss does in three...

We'll come back to the issue of programming.

First--and this entry will be full of SPOILERS big and small--Nathan's introduction is entirely manipulative of both Caleb (Domhnall Gleeson) and the audience. Reclusive tech-genius living in (my personal take) an awesome house in the middle of a lush green landscape in Norway. (The minimalist design coupled with deliberate intrusions by the nature around it is the kind of house I love.) His "home" is isolated from the world so much that the helicopter that flies you there (and there's a nice Quigley Down Under moment in which Caleb learns they've already been flying over Nathan's estate for two hours) cannot even drop you off within sight of the house itself. "Follow the river," the pilot tells Caleb. This positions the story to come outside of not only the modern world (ironically) but outside of the real world entirely (deliberately) for the audience. And really, this is some LEVEL 2 programming in terms of the moviegoing experience. The film quickly separates us from the larger world and isolates us just as it isolates Caleb. Then comes Nathan himself. He's working out, punching a heavy bag. Big masculine display for the audience and for Caleb. However reality works--I've never been in the situation--in movies we know that in such an isolated, natural location, the sound of the helicopter anywhere in the vicinity would be audible; i.e. Nathan knows Caleb is close. That stop at the door for Caleb to get his photo and key card, plus walking through a few rooms offer more prep time for Nathan. In cinematic terms, it also orients us to the house a bit. The high-tech setup, the minimalist design, all the glass that visually separates us from the natural world outside like an aquarium--we're inside this aquarium along with Caleb. 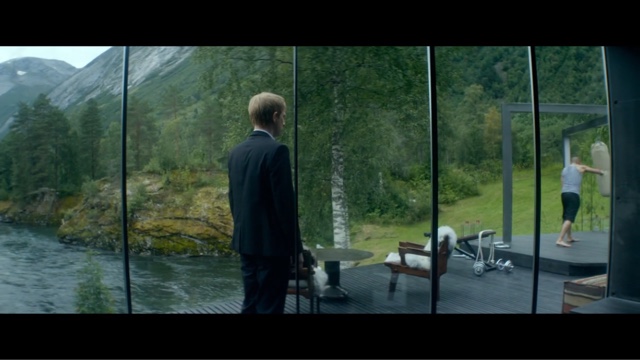 In fact, I paused the movie to write that last paragraph and, knowing where this film is going because I saw it in the theater right when it came out, I rather like this particular visual. We are inside the house with Caleb. He is by the floor-to-ceiling windows (technically, by the time Nathan is in the shot, Caleb is outside those windows, but the visual echoes a moment earlier so well that he might as well still be inside) looking at Nathan (at the right edge of the frame) working out, a river in the left of the frame, and a whole lot of green everywhere else. Later, glass will be the thing that physically (and symbolically) separates Caleb from Ava, the man from the machine (man from woman, as well, but at the rate this entry is going, that might have to wait until tomorrow). Juxtaposing this shot with so many later ones, this would suggest that Nathan is a machine. Plotwise, it's safer to compare Caleb to a machine, manipulated by Nathan into his relationship with Ava, manipulated by Nathan into helping Ava, by Ava into betraying Nathan, and... well, it's complicated, but suffice it to say, Nathan--our protagonist, mind you--has very little agency in this story. So, by introducing Nathan on the outside of the house, Caleb inside, the film is foreshadowing manipulation to come.

The philosophical question, then, is this: while Nathan clearly represents the advance of technology on a literal level, he seems to represent some dark side of nature on a metaphorical level. Here, visually, he is the natural, while Caleb has just positioned himself inside the unnatural (though with those awesome intrusions by the natural rock). This is Caleb's programming on all three levels--he has just become part of the machine. A white, patriarchal, misogynist machine, to be sure, but that particular angle may just have to wait until tomorrow. Nathan approaches Caleb--an intimidating figure physically, muscular butnot too muscular, bearded, and unwrapping the tape from his hands as he approaches.

(And, I need some visuals for you. Picture me opening up Amazon Video on my phone so I can get a few screencaps. Including one I will insert above. Yet, I will leave this parenthetical here. Why do you suppose that is? Am I manipulating the way you read this entry? Am I trying to make it more like a personal interaction, a conversation, so you don't back away from some of the big ideas to come? I mean, I intended to get directly into the way this film deals with female agency and "feminism" but it is so much bigger than just that. And, it will take more than just one viewing, more than just one entry. Already nearly 900 words in--when my usual goal for an entry is 1000--and I'm wondering how much further I need to go to just deal in the way the LEVEL 2 programming is happening here, let alone LEVEL 1, and relegating LEVEL 3 to another day. A movie like any of yesterdays' Hunger Games trilogy films--it's got nice visuals, but mostly they are just serviceable, the most basic form necessary to advance to the next shot and the next shot and get the plot moving. Alex Garland is a better director than... whoever directed any of those three Hunger Games films; the direction in those films mattered so little, I am not even inclined to go look up the directors' names to share them. I just don't think they matter very much. And this, in Hollywood where the opening titles generally refer to the film as belonging to the director--A Stephen Spielberg Film, A Spike Lee Joint, etcetera. The Hunger Games franchise is not about the directors. It's partly about the stars but more about servicing a popular series with a built-in audience. Ex Machina doesn't have that built-in audience. Even among some nerdy filmgoers who should have loved the premise of this film, this thing was a slow burn, building word-of-mouth slowly.

What does that say about what we want from a film, though? A popular film, like pop music, does not need great (READ: interesting) direction, it does not need a nuanced, thoughtful story, and it certainly does not need to (deliberately) comment on the world around it. But, something like Ex Machina--sure it was made by a proven director, but not a blockbuster director, and we do not expect pop sensibilities. We expect something more... interesting.) 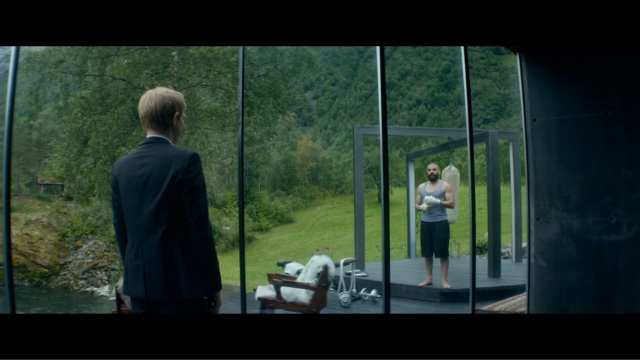 Interesting sidenote on the visual: while Nathan is clearly the intimidating figure, Caleb looms larger in the frame. However, since Caleb is wearing a dark suit, he might as well be part of the house, balancing out the dark wall interior at the right edge of the frame here.

Nathan counters this intimidating visual with an immediate friendliness that is almost too intimate, telling him about his hangover as if they are the best of friends already. On first blush, Nathan is friendly, and we (and Caleb) welcome that. Watching the film again, though, it is clear that Nathan is already manipulating Caleb (LEVEL 1) just as Garland is manipulating us (LEVEL 2) by juxtaposing one expectation with another--LEVEL 3 programming would suggest that Nathan be either hypermasculine or friendly, not both. To echo the masculine side, we have a bull skull (though blackened, suggesting that a) it is fake or b) it is not meant to stand out from its surroundings or c) both) on the wall. And, in a location with little decoration to it, any decoration must (presumably) be important. 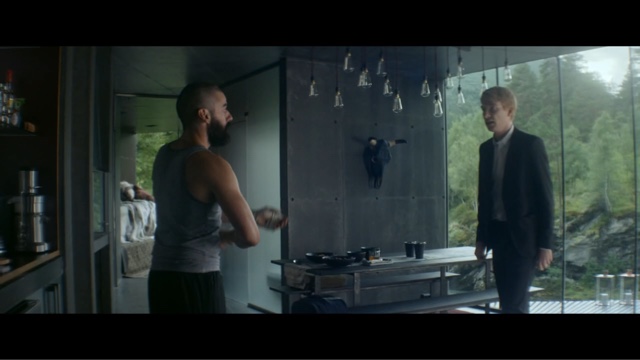 Then Nathan (and Garland) take it to a new level. Nathan says,

And, I get that. I get the moment you're having but, dude, can we just get past that? Can we just be two guys? Nathan and Caleb. Not the whole employer-employee thing. 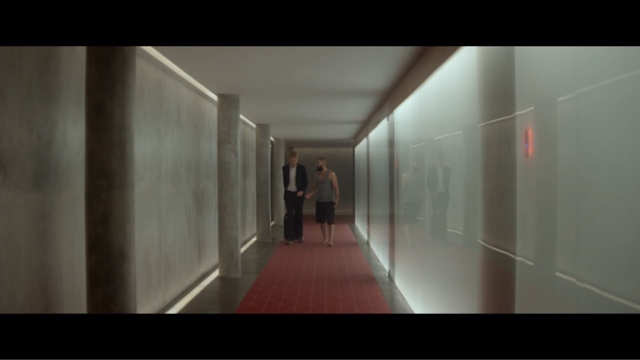 The scenes ends after Caleb agrees, nervously, to these terms, and we go further into the house, to where it no longer resembles a house at all. In the bedroom where Nathan will be sleeping, Nathan points out the amenities and, asks, "Cozy, right?" 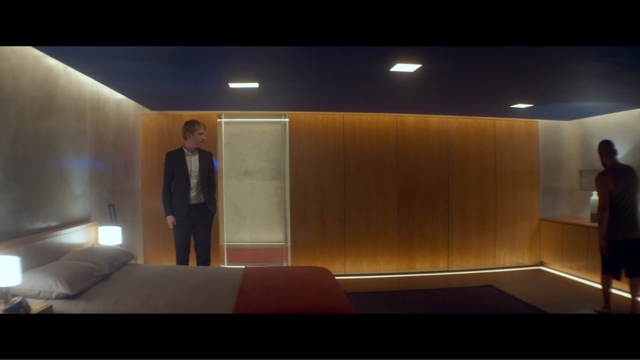 Caleb, either because he is still adjusting or because, yeah, something is missing from this room, as Nathan is about to point out, replies (clearly lying), "Yeah, this is great." 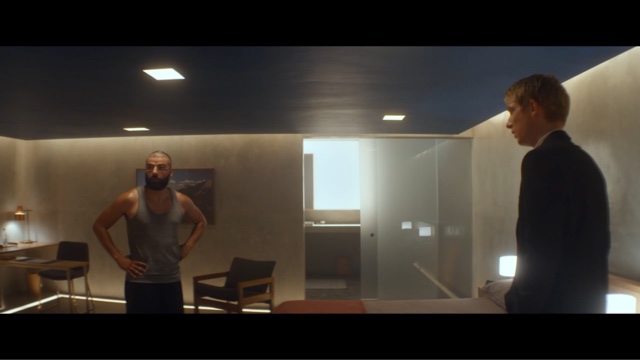 "It's the windows," Nathan replies. "You're thinking, there's no windows. It's subterranean. It's not cozy.. It's claustrophobic... Caleb, there's a reason there are no windows in this room... This building isn't a house. It's a research facility. Buried in these walls is enough fiber optic cable to reach the moon and lasso it." Then Nathan makes it personal again. He has just established that his "house" is a "lab" but he moves closer to Caleb as he gives him the basic gist of what he wants from him. 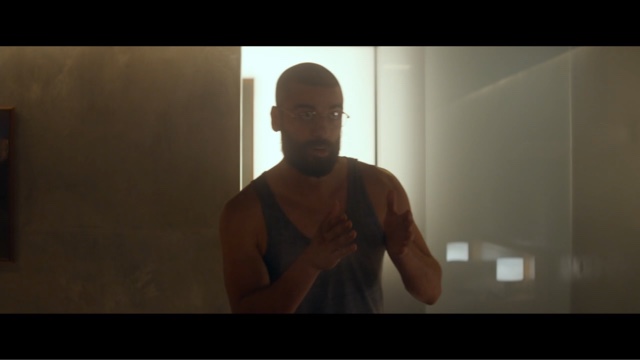 "And I want to talk to you about what I'm researching. I want to share it with you." Share. That's the manipulation at work, but Caleb doesn't get it. He's too excited, and too flustered to really disagree with anything. "So much, it's eating me up inside," Nathan adds. He's got him. He's got us.

Then things take an immediate turn when he brings up a non-disclosure agreement that Caleb needs to sign before he can even know the subject of the work going on in Nathan's "house." But, he's already got Caleb on the hook (LEVEL 1). His line a moment later--

You don't have to sign it. You know we can spend the next few days just shooting pool, getting drunk together. Bonding. And when you discover what you've missed out on, in about a year, you're gonna regret it for the rest of your life.

Plus, we in the audience have the advantage of having seen the trailer or heard something about the movie. We just want Caleb to sign that agreement already so we can get on to some sexy robot time.