sexuality as a diversion tactic

No, salad dressing. Yeah, of girl. What's your type? You know what, don't even answer that. Let's say it's black chicks. Okay, that's your thing. For the sake of argument, that's your thing, okay? Why is that your thing? Because you did a detailed analysis of all racial types and you cross-referenced that analysis with a points-based system? No. You're just attracted to black chicks. A consequence of accumulated external stimuli that you probably didn't even register as they registered with you.

Did you program her to like me, or not?

Nobody programmed me to be straight.

You decided to be straight? Please! Of course, you were programmed. By nature or nurture or both. And, to be honest, Caleb, you're starting to annoy me now because this is your insecurity talking. This is not your intellect.

One could assume that Nathan is projecting a little, that his insecurity forces him to look at sexuality and attraction as programmed (LEVEL 3). I mean, Nathan has an AI (Kyoko) who he has made unable to speak, who he can force to dance by turning on (presumably) the right song, with whom he can have sex whenever he wants. On some level, maybe it's just loneliness--while he perfects his primary AI, he keeps a secondary one around as a companion. But, he chooses to make her mute. He chooses to make her available on cue for dancing and for sex, and to wait on him and take his verbal abuse when she spills something--nevermind that her spill is evidence of either a) his brilliance or b) his inadequacy as a robot designer and programmer. Actually, maybe we can assume that he thinks that it is B. He seems insecure enough that he would take the fault as his own fault... but also arrogant enough to think he had somehow perfected the female form by making her capable of human clumsiness.

(It is interesting that we assume (and the film wants (LEVEL 2) us to assume) that a) Nathan made Kyoko silent rather than some other alternative--she has nothing to say, for example, or his programming with her was flawed and she simply cannot speak--as part of her subservience; and that b) if she dances with him or has sex with him, it must be because he has forced it. I think the film offers implicit evidence of these things but it never says them outright, so at least on some level, there is a presumption of a gender differential here that exists more in our heads as we watch the film than in the film itself.

Maybe the juxtaposition just now of Kyoko and Nathan kissing to the black and white imagining by Caleb of he and Ava kissing was a signal that the former was as genuine as we should suspect the latter is at this point in the film. Or maybe it is a visual echo to mark Kyoko as an AI in case we have not caught on just yet. Or maybe it is a marker of Caleb as an AI because he is imagining in black and white after telling Ava the Mary in the Black and White Room story... but that last option is a topic for another day. It would indicate that, perhaps, the kiss between Kyoko and Nathan is more genuine than that between Caleb and Ava. Not because the latter is imaginary but because the former at least includes one human.

But then, in regard to this film, the question of what is genuine is a variation on a few of the primary philosophical questions it asks--about free will, about love, about manipulation and agency.

It bothers me lately when I see (on IMDb boards or, just today, on io9's Facebook page) people speaking of this film as if it is simplistic, just a thriller. I liked this movie the first time I saw it, when it was in theaters, but these past few days I think I have become more attached to it.

Like Caleb becoming attached to Ava, as it were.

Nathan's interpretation of reality is, arguably, more important than reality in this film. What he thinks of women and why they act the way that they act (LEVEL 3) dictates how he programs them (LEVEL 1). (The one detail he offers to describe Ghostbusters, just now, was that a ghost performs oral sex on Dan Aykroyd. Not sure if that is a telling detail, but I just noticed it.) What he thinks of men and why they act the way that they act dictates how he may attempt to a) manipulate Caleb and b) allow Ava to manipulate Caleb. Capital-T Truth does not matter here in the reality of the film because Nathan controls the environment and the individuals who are present.

Nathan believes that consciousness and sexuality go hand in hand, plus, as he says, sexuality is fun, so why not have it in his AIs?

Steve Rose at The Guardian points out,

Looking back over movie history, it is difficult to find a female robot/android/cyborg who hasn't been created (by men, of course) in the form of an attractive young woman--and therefore played by one. This often enables the movie to raise pertinent points about consciousness and technology while also giving male viewers an eyeful of female flesh. The non-scientific term for this is "having your cake and eating it".

To be fair, Ava doesn't have much "female flesh" throughout most of the film. Still, she is sexualized almost immediately, if by no other means than the inherently male gaze of the camera. Which might not quite gel with my argument yesterday, of course. But, even the silhouette of the naked form is sexy, right? I mean, why else does that tire flap on so many big rigs exist? So, the actual presence of "flesh" is not the point so much as the presence of shape. Natalie Wilson at Ms. Magazine asks:

[D]id Ava's body have to be so sexualized and so transparent, forcing us to gaze inside of her along with Caleb, as if her body has no boundary? Or perhaps this is just the point--we can finally see inside a woman's body, and she is not that musty, smelly, hairy thing of so many nightmares (Freud's included), not the vagina dentata or a giver/taker of life--no, she is built like a car of all things, and under her roof her parts sing and hum like a well-oiled engine.

The machinery/anatomy metaphor serves another purpose, of course--setting aside the social implication of wanting a woman who will obey, for the moment. As Kyle Buchanan at Vulture says of the men in Ex Machina, "the movie links their desire to create with the more primal desire to procreate."

The movie also allows for--but does not, necessarily, suggest--nudity equals sexuality. Notably--as referenced in yesterday's entry--the nudity in this film is not sexual. Naked AIs hang in closets without clothes (and without some of their skin). Kyoko lies on a couch naked, and peels some of her skin away to reveal to Caleb what she is. She does not then come on to him; that was earlier, when she was dressed. Bitch Media's Kjerstin Johnson is one of those who calls the nudity in that last dressing scene--which I broke down yesterday--"gratuitous." She also says it was "male gaze-y" and it made her "uncomfortable." While I disagree with that sentiment, I like the idea that follows it. In a parenthetical, she writes:

By the way, I think there should be another "rule" a la Bechdel test about naked women in film--how long are they naked? For whose pleasure are the shots? Is she a corpse, yes/no?

(Maybe call it the Mathilda May Test.)

I think, the more "male gaze-y" shots happen when Ava is without her skin. 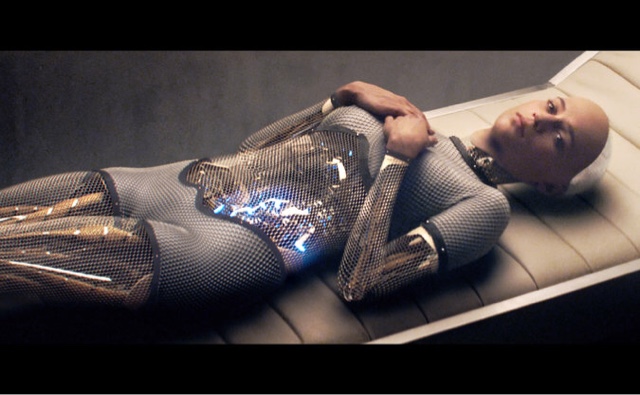 Standing before the mirror, no sensual pose, just standing--and with the camera looking on from afar--this doesn't scream male gaze to me. Johnson points out the deeper issue in that scene, though. She writes:

But more to the point, the scene was shot with warm light and soaring, swelling, hopeful music. We are supposed to be happy for her, to see this as her moment of liberation. But, I couldn't help but think of the psychological trauma these female bots had experienced. In order to be free, Ava had to literally skin her AI sisters and leave them behind. Is Ava aware of the mental and sexual torture they had all been through? Is she as sickened by the sight of these mangled, naked female bodies as I was? I'm not sure these questions of consciousness or embodiment are ones that crossed the minds of Caleb or Nathan [LEVEL 1 and LEVEL 3]--or director/writer Alex Garland [LEVEL 2], for that matter.

Now, consider what I said above about Nathan's sense of reality, or that parenthetical above about what we presume about Nathan and his treatment of his AIs. We see flesh and we assume a sexual angle when there is no practical reason to dress these AIs. (Plus, if Caleb is also an AI, an entire new angle opens up.) Johnson assumes "sexual torture" when the film offers no actual evidence of anything of the sort. She assumes "psychological trauma" but psychological trauma implies a success in the AI (like Jade, who damages herself in trying to break the glass of her enclosure) that would not indicate destruction by Nathan to make a new model. In fact, if Nathan is as good at what he does as it seems--his personality issues notwithstanding--Jade's apparent discomfort would suggest fixing her body, not her mind. We could just as easily assume mechanical or programming error as psychological trauma. Additionally, taking the skin off her "AI sisters"--nevermind the loaded terminology of calling them sisters--might be as simple as her previous scene getting dressed for Caleb. That is, if she can stab Nathan and leave Caleb behind to die, why should we assume that she has any conscience at all? She just wants to go people-watching.

And, I think these "questions of consciousness and embodiment" were exactly what Garland had in mind when writing and directing this film. That is kind of the point.

Buchanan, K. (2015, April 22). Does Ex Machina have a woman problem, or is its take on gender truly futuristic? Vulture. http://www.vulture.com/2015/04/why-ex-machina-take-on-gender-is-so-advanced.html

Johnson, K. (2015, May 8). How "Ex Machina" toys with its female characters. Bitch Media. Retrieved from https://bitchmedia.org/post/ex-machina-film-review-gender-and-ai-feminism