"I fear this is going to be offensive to women everywhere." - my daughter Saer as ginger Snaps begins again.

Ginger to Brigitte: "Just so you know, the words 'just' and 'cramps' don't got together." Saer" That's true... story of my life.

Nurse tells Ginger to expect the blood and pain for the next 30 years or so. Saer says--sarcastically, of course--"Yay!"

And she wandered off. 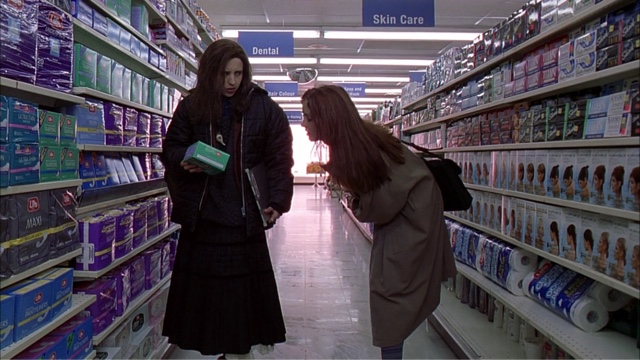 As the film continues, I'm wondering where the line falls between being offensive and commenting on the stuff that is offensive. Like Ginger's line--"A girl can only be a slut, a bitch, a tease, or the virgin next door." Sure, she's referencing what the world--men--think about girls. But, the film never quite contradicts what she's saying here. Brigitte remains the "virgin next door" while Ginger quite literally becomes a "bitch." The best argument for this film moving past Ginger's simplification is that Brigitte is not some helpless Final Girl like she's in a slasher film. She does> take up a phallic weapon in the end, two actually--a knife and a hypodermic needle, but she spends time studying and preparing. She's closer to, say, Nancy in A Nightmare on Elm Street than Laurie in Halloween...

Which may be a bad dichotomy, come to think of it, because a) I argued before about whether or not Laurie uses phallic (i.e. masculine) weapons to fight back against Michael (short answer: no, she doesn't; she specifically uses items related to "feminine" endeavors: a knitting needle, a hanger, a kitchen knife) and b) Laurie is specifically introduced to us in the first two acts of Halloween as an intelligent, capable young woman. Here, Brigitte is also specifically intelligent--she skipped a grade--and capable. She's timid and awkward, but smart.

Ultimately, the film climax is structured like some feminine take on a Freudian impulse--as my media teacher last year used to say it, you gotta kill the father to become a man (or something like that. Brigitte does not need to kill her mother to become a woman but she does need to kill her sister to grow up herself. (I've not seen the sequel yet, but I understand Brigitte becomes a werewolf, so the metaphor continues.) Brigitte lives in the shadow of her older sister. Ginger gets the boys' attention. And, in simplistic terms, that works to represent everything a girl would want, right? The one boy who pays attention to Brigitte ends up dead in the end. But next time, it will be her turn to get the attention from all the boys. It's an unfortunate shorthand for growing up, going through puberty, becoming a woman. But, movies must necessarily speak in shorthand sometimes.