the best of us against each other 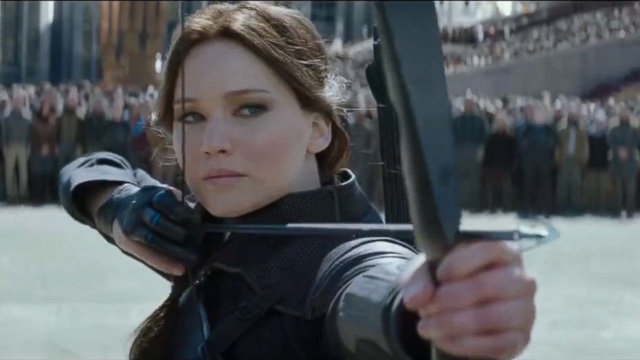 Allow me to get the obvious out of the way after last week's Hunger Games marathon: in The Hunger Games: Mockingjay Part 2, Katniss (Jennifer Lawrence, in case you're living under a rock) actually does stuff throughout most of the film. Almost all of it is even her idea. The interesting thing, though, is that the story still manages to let Katniss kill almost no one. She kills some Mutts--and not the dog-type like in the first film, but some naked albino 28 Days Later-style zombies instead...

In fact, that sequence does a great job of building some real tension and giving weight to an otherwise obvious set of deaths to winnow down the main group in the film--oh, SPOILERS will happen in this entry. If you want to see the film and have not read the book, you probably should not be reading this. My complaint regarding that sequence is that the score suggests action film when the sequence plays more like something out of a horror film. Actually, that sequence is one of several setpieces that work well in this film--another would be a sequence with a sudden flood of oil. The direction overall is serviceable, nothing special. The score hits the obvious beats. The acting is... well, the level you might expect from a franchise based on a series of young adult novels. The plot is straightforward enough--makes you forget that Part 1 was trimmed off the front of it into a separate film.

Where it really gets interesting is toward the end, when the film gets weirdly topical--future readers, right now is right after the Bataclan theatre attacks in Paris and there's debate about Syrian refugees and there are plenty (Republicans, mostly) who are suspicious of refugees and think terrorists will pose as refugees to get into this country. Anyway, so Katniss and Gale (Liam Hemsworth) dress up to blend in with Capitol refugees heading for the mansion of President Snow (Donald Sutherland) to be safe from the encroaching war zone. Katniss, of course, is doing this to assassinate President Snow, but instead the sequence ends with bombs going off over the crowd, killing mostly children.

Meanwhile, President Snow gives a nice speech on TV about the oncoming rebels and how they have never known the comforts that we have, they hate us for our freedom and they're coming to destroy our lifestyle... and Suzanne Collins is on record about from where the idea for this story came:

I was flipping through images of reality television, there were these young people competing for a million dollars... and I saw images of the Iraq War... Two things began to sort of fuse together in a very unsettling way, and there is really the moment when I got the idea for Katniss' story.

ABC News' Dan Harris and Ben Forer argue that The Hunger Games "is much heavier than most young adult fare." Then again, with Divergent, Maze Runner, The Fault in Our Stars and plenty of other recent young adult novels turned movies deal in very heavy material, life and death, war, societal upheaval. The Hunger Games series is not actually much of an exception. Harris and Forer point out that Collins' "father served in Vietnam when she was a little girl [and she] wants young people to think critically about the brutality of war and culture's desensitization to violence."

And, that is where the Hunger Games series--the films, at least--fails. Most of the brutality involves imaginary animals--wolf mutts, monkey mutts, lizard mutts (those were supposed to be lizard-like? I did not get that sense at all from the movie today)--or Peacekeepers with visored helmets so they are faceless. Katniss doesn't kill any of the Peacekeepers, by the way, except for that hovercraft she shot down in Part 1, and in this film she defends that shot to Gale as self-defense. She is actually actively avoiding killing people. And, last week, I argued that this could be a deliberate element of this being a young adult story; sure, death happens, but our protagonist is distanced from all of that. If you want to get us to really think about the "brutality" of war and our "desensitization" to violence, you need to show some brutality, show some violence. The Hunger Games movies rely a little too much on our imagination to get us thinking about what is really going on. I mean, children--including Katniss' sister Primrose (Willow Shields, who otherwise is barely in the film)--die en masse in an explosion and we do not see bodies in grisly detail. We see a crying child, we see distraught survivors, but then CUT TO the next scene, hey the war's suddenly over. And, Katniss' murder plans for President Snow didn't get to happen. It is as if R.W.B. Lewis' "American Adam" is at the center of this film--we have this sort of ideal American hero who is at once both innocent and entirely capable of killing the bad guy. Like Katniss shooting that apple in the first film made her a badass (even though she barely uses that bow for the rest of the film), her decision to kill President Snow drives this film, makes a badass all over again, but then she never actually follows through. In fact, her big faceoff with Snow in this film is a conversation that is actually friendlier than her conversation with him in Catching Fire. Snow, it has now been established, is a dying old man--hardly worth killing.

Of course, all of this avoidance of showing the actual war makes the eventual murder that Katniss does commit work rather well.

And, my daughter Saer has been arguing with me about all this as I've been writing. Maybe this shallow display of violence works for a younger audience. But, I suspect that the younger audience sees this film the same way I saw Commando or Rambo in the 1980s. But without the jingoistic angle.