they're just being normal teenage girls

For some reason, Ginger Snaps is one horror film I have just never gotten around to.

I just noticed on IMDb that is was made in Canada. That might be why I've been avoiding it, either consciously or unconsciously. Canadian horror films generally do not work for me...

(That one of the lead characters is named Ginger makes me wary, like the the title is going to be a bit too literal in its figurativeness.)

Brigitte and Ginger are the resident goth girls--they wear necklaces with bird skulls on them--in an otherwise (apparently) cleancut--as if that is inherently a contradiction--school. Requisite outcasts. 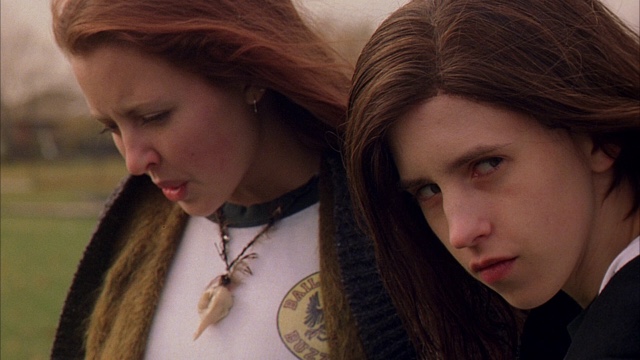 Quick sidenote: I was looking up an image to use and realized why Emily Perkins looked familiar--why Katharine Isabelle looked familiar was obvious as Hannibal was far more recent than It, from which I know Perkins. She (Perkins) played Bev, the lone female member of the Losers. Despite its TV-movie quality, that particular Stephen King adaptation works pretty well, at least through the kids-centric half (and if you absolutely pretend that the ending didn't happen). I hope the new adaptation of It can improve on the original (and I sincerely hope they don't get caught up in Pennywise, even if Tim Curry's version of that clown was awesome; King's story needs a multitude of monsters, I think.

But, anyway, in the meantime, as I'm rambling about an old miniseries, Ginger just got attacked by the beast that's been killing dogs in their town--with the quick cuts during the attack, the werewolf actually looked pretty good, and this movie certainly loves its gore.

For the record, though I have never seen this movie, I knew it was a werewolf movie going in. I've also heard that there's a particular feminist tone to it, and the Fitzgeralds' mother (Mimi Rogers) talking about how the girls are both late in getting getting their first periods, plus Brigitte suggesting maybe it was a bear that attacked Ginger (even though Brigitte saw it and got a picture of it and should damn well know that was not a bear) because she was "on the rag", I'm buying it.

Ginger's scars (on her shoulder and chest) start growing hair and--in another scene about female puberty, the school nurse explaining how Ginger's period should go after Ginger started bleeding in the bathroom--and Brigitte asks the best of questions for this double context: "What about hair that wasn't there before?"

I guess this film will be taking the werewolf transformation as menstruation metaphor all the way. I fully approve of this. Plus, that line--and the nurse's misunderstanding of it--was hilarious.

Ginger's "makeover", strutting down the hall and getting everyone's attention--it plays like something out of Jawbreaker or Mean Girls, and in retrospect it is interesting how those transformations could be taken as metaphors for puberty as much as they represent the crossing of clique lines. Girl gets older, girl changes. Meanwhile, in this case, the younger sister is wary.

And, Ginger is growing a tail.

Ginger's with a guy--Jason (Jesse Moss)--and he tells her to "just lie back and relax." "You lie back and relax," she replies. "Who's the guy here," he asks. And she pushes him back and... well, she ate him? Nope, the blood is a misdirect. She killed the dog when she got home because he barked at her too much. The sex was normal... well, awkward teenage sex. Meanwhile, Brigitte is getting close to Sam (Kris Lemche) whose van hit the werewolf--he thinks it was her and not Ginger who has changed. That this apparent change draws a boy's attention as much as Ginger's real change drew other boys' attention is interesting because Brigitte has undergone neither the change of menarche nor lycanthropy. (His interest is especially interesting because he later reveals that he knows it is Ginger who has changed.)

The pretending-to-be-dead photo thing comes back to save Ginger and Brigitte from being caught with a dead body on the kitchen floor--the resident "bitch" character, Trina (Danielle Hampton). Accidental death while fighting. Clever use of the goth outsider thing.

Brigitte finds Ginger in the bathroom cutting herself. Ostensibly, she's trying to cut her tail off, but the potential metaphor for moody (goth) teenage girl is... Well, it's a little on-the-nose, but it still works, just like the rest of the metaphors going on in this film...

... like the final conflict between the sisters being framed as conflict over a boy.