Today it is 1957. Watching I Was a Teenage Werewolf.. Was reading the other day about how this movie was a bit controversial when it came out (not sure where I read that so I cannot quote anything), and right away it starts in with a fistfight that escalates to Tony (Michael Landon) grabbing a shovel. The cops show and Tony seems a lot like James Dean in Rebel Without a Cause two years earlier; he wants to fight everybody.

Some classic 50s stuff going on when Tony comes to take Arlene (Yvonne Lime) out and her father has a talk with him. The party they go to is odd--a little bit beat, a little bit Elvis. Vic (Ken Miller) is more interested in playing his bongos than dancing with Pearl (Cynthia Chenault) (who, for some reason is dressed like a clown because she thought it was a costume party). A few pranks happen until Tony overreacts to one and punches Vic.

Tony sees a doctor (Whit Bissell) because, well, his anger issues. Doctor drugs him and experiments on him because of his "proper disturbed emotional background." The doctor tells his assistant, "Mankind is on the verge of destroying itself. The only hope for the human race is to hurl it back into its primitive dawn, to start all over again." So, this is a nuclear age science fiction horror film but without a big giant monster? (I have seen this movie before, even probably saw the Mystery Science Theater 3000 version of it, but I just don't remember it.)

I must point out, then, that technically Tony is not a werewolf at all. The doctor is de-evolving him, if I understand it right... But then he just does some hypnotic regression that first time. And the second time... Actually, that second one involves talk of having fangs and digging them into flesh. Of course, I shouldn't expect the science of a werewolf movie from the 50s to be accurate.

I guess he was hypnotized into being a werewolf.

Complaint: the "night" scenes in this are horrible. It's mid-afternoon at best.

Pepe (Vladimir Sokoloff), the janitor at the police station, explains that a werewolf is a human "possessed" by a wolf. Despite the experimentation on Tony in the text of the film, this explanation of possession matches the subtext to other teen werewolf films--like Ginger Fitzgerald or Scott Howard, Tony's "werewolf"-ism lines up with hormonal changes. Judging by a story he told under hypnosis, he's had anger issues since as far back as age 12.

Watching a gymnast workout (and then hearing a school alarm), Tony changes, grows a whole lot of hair, and goes after her. And, I guess he sort of kills her, the actual bite or whatever is hidden by a falling curtain. 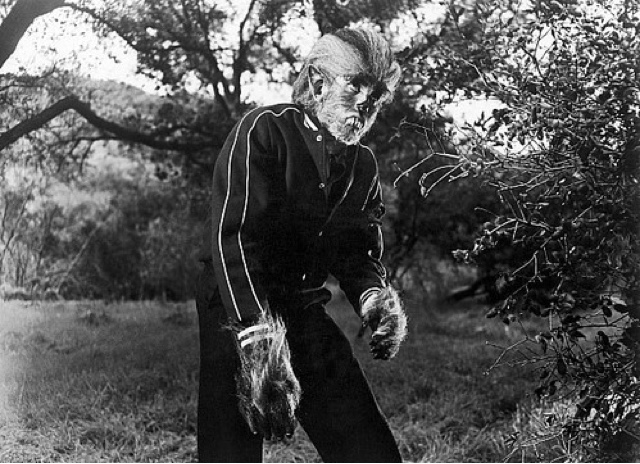 Like Rebel Without a Cause two years earlier, or West Side Story, which was on Browadway but wouldn't be a film for a few more years, I Was a Teenage Werewolf taps into an apparent fear of teenagers, of rebellion and violence from the younger generation. The film doesn't get into Tony's head too much, and follows events from the perspective of the adults involved--the cops, the posse, a couple reporters... It's interesting that the teenagers in this film were having their party with, you know, rock and roll music. It is like the music brought rebellion to this rural town. This story must have freaked out adults who saw the film when it came out.

Email ThisBlogThis!Share to TwitterShare to FacebookShare to Pinterest
Labels: 1950s, blog, film, films, groundhog day project, i was a teenage werewolf, michael landon, movie, movies, rebel without a cause, werewolf, west side story