as long as we got each other

(There will be profanity.)

About 40 minutes into S.F.W., Cliff Spab is wandering about inside a record store--this film is, of course, from when those still existed--and a video of him held hostage comes on and he watches. It's one of the interesting moments where you can really see what the film is going for, as Spab sees himself from the outside and see what has people so enamored. In that video, Spab says:

What's the point of saying anything?

You know how it is, man. The same old fucking shit.

So, I'm bored as shit. So fucking what?

So, I don't know what the fuck's going on. So fucking what?

So, I haven't had a decent shower and food in way too fucking... So fucking what?

How is this different from anything else that's happened in my life?

Remove a whole lot of swearing and in the middle of that is the same sentiment Phil Connors gets at in Groundhog Day when he asks, "What would you do if you were stuck in one place, and every day was exactly the same and nothing that you did mattered?" (Maybe that's why they hired Danny Rubin to work on this screenplay; he knows how to write the repetitive bullshit of everyday life, or at least how to play off of it.) That's why it actually matters that Phil Connors and his wife Rita show up in this film; maybe they're different actors, but they might as well be the same characters because that is exactly who Phil Connors and Rita Hanson are going to become with the time loop debacle behind them--a couple of conservative pseudo-yuppies who go to conventions for... I'm not even sure what.

Meanwhile, the FBI Agent is called Parsley because his character is just a garnish, unimportant to the actual story, just there to maybe add a little urgency during act two.

And, there are a lot of awkward closeups in this film, and I think that's on purpose, force us into the crowd of fans on Cliff Spab Day, make our experience as uncomfortable as it clearly is for Spab now and then. 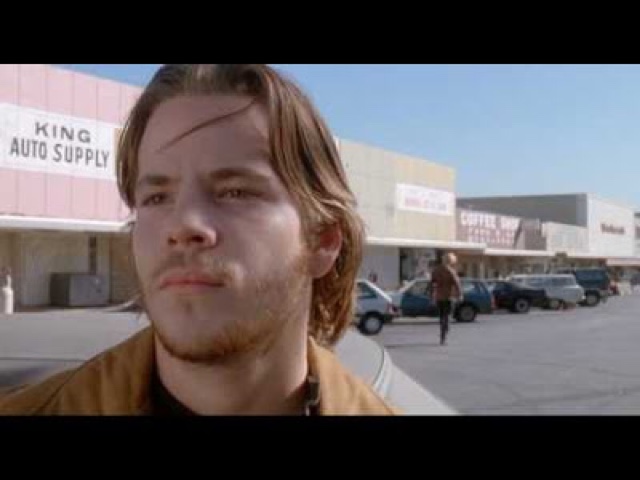 Twenty-five minutes into the movie, Spab has a moment with his shadow. I've of course written about the Jungian shadow in relation to Groundhog Day at least a few times, but this is a little different. He's sneaking over to his dead friend's house to (eventually) have sex with his sister (Joey Lauren Adams), and he spots his own shadow on the ground before him. He pauses, then moves a limb, as if he expects that maybe that shadow will not move quite as he does. Then another limb. There's even the briefest suggestion of a cruciform pose--but don't expect a Christ-Figuring today (even though he goes for the cruciform pose again later before he throws the gun in the lake, as well)--and then he spins. He dances with his own shadow. Psychologically speaking, though, Cliff Spab doesn't really have much of a shadow. Or at least, he didn't used to. He spoke (and speaks) his mind, he swears, he drinks, he smokes, he had sex with his dead friend's sister, he trashes the bedroom his mother has cleaned for him. All because he can. His shadow is some celebrity he didn't want to be, some hero he would have rather not become...

And, I read into this film more than it maybe deserves. The script is not great, some of the dialogue is, well, lazy. The film hints at big ideas that it cannot quite achieve except in some shallow, mid-90s fashion. But, there's this dark heart in the script that really works. When reality television was still barely a thing, this film offers a different kind of reality television and suggests that being put on camera for 36 days straight was maybe more traumatic than being held at gunpoint for the same. Spab and Wendy cannot be people anymore. Their selves have become shadows left behind. And, there's something there about how being on televisions, being celebrities, is deadening, soul-sucking. The hostages are being shot when they aren't being shot. It's a simple metaphor and a big idea. A bigger idea than this film can really manage, but it tries and it tries. In 1994, that was enough.

(The voiceover, with its obvious puns and trite commentary remind me a bit too much of the thankfully abandoned voiceover in Rubin's original script for Groundhog Day.)

(The fake Phil Donahue, Sam Donaldson, Larry King and Ted Koppel (all played by John Roarke) and that Gary Coleman/Dori Smelling TV movie bit don't quite fit the visual style of the rest of the film. On purpose, of course. But, it also detracts and distracts from the film's attempt to take itself seriously.)

And then, Phil Connors and his wife Rita show up and they've gone mainstream, sold out. Phil was supposed to have learned some great lesson about life when he was stuck in that time loop in Punxsutawney. Now, he's trapped in the same day-to-day bullshit life that most of us have. Spab may be a distraction from their boring lives, but that's just temporary. They are both going to be back at their day jobs (presumably, still working in the news in some way, though they have made it to Los Angeles (not sure if the film is set in Los Angeles but it was definitely filmed around here). So, Phil maybe finally made it onto a network and Rita's producing something bigger than on-location weather spots. But, at night, they return to their suburban home, where they're working on the first of their 2 1/2 kids, and I'm sure they've got a dog, or maybe a pet groundhog.

Get stuck in a tiny town in western Pennsylvania and you learn to be a better man. Get stuck in a convenience store and, well, it won't matter if you try to change because TV viewers at home are all worshipping your self-destructive nihilism. Still, imagine it--like Phil and Rita, with their boring lives to go with their boring name tags, Spab and Wendy will get married, finally get out of the limelight, and move into a different suburb, have their own 2 1/2 kids, maybe a cat--or that dog named Rusty that Spab claimed to have when he first spoke to the S.P.L.I.T. Image folks.

Viel Spab, by the way--German for "have fun."