you gotta watch out for them foreigners

Let's think about the biology of a mogwai. It can't get wet, yet it's got blood. Blood--human blood, anyway--is like half water. Technically, it's like 55% plasma and plasma is 90% water. And, Gizmo's blood seems to be similar to human blood--it's red, it's translucent. Gremlin blood is a bit different, thicker and a dark green. Still liquid, though. In terms of evolutionary biology, the idea that a species would evolve that did not involve water in a major way...

(All Stripe needed to do when all of his kids got blown up was run around in the snow for a bit. That would get him plenty wet.) 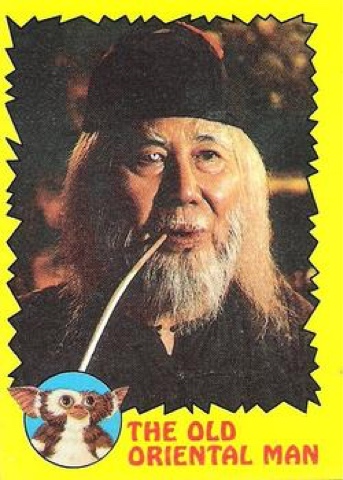 Of course, just because the old Chinese shopkeeper (or rather, his grandson) says you shouldn't get the mogwai wet, doesn't mean that getting it wet is a bad thing. In fact, in Chinese tradition, the mogui mating season coincides with rain because rain signifies, you know, growth and whatnot. Water is life.

Chinese tradition? Glad you asked. Just like "gremlin" was a term borrowed for this movie, so was "mogwai." In Chinese tradition, mogwai is like a vengeful ghost. In the novelization of Gremlins, it is said (apparently) that mogwai are almost always born mischievous; the gentler Gizmo is a rarity. So, take a little breeding with the rain, some vengeance/mischief and you've got the film's version of the mogwai. A little bit of cultural appropriation but just surface stuff, keep it simple...

The bigger issue is Futterman's rants about foreigners and how they "plant gremlins in their machinery." That and the very notion of the "rules." Not just the water thing, which makes no biological or logical sense. But also the feeding after midnight thing. Midnight is an arbitrary, man-made division. And, if you wanna nitpick, you gotta wonder if the rule takes into account time zones or daylight savings time. I also wonder how much a mogwai needs to eat. The mogwai here make some noise and Billy goes to get them food, comes back with a plate of chicken, but they might as well have just distracted him and eaten some of the snacks he had there on the bed...

And, I gotta nitpick Billy's decisions here. Can't blame him for the clock, of course. He did his due diligence and, you know, glanced at the clock to check the time. But, in the morning, there are still chicken parts around the room. If you don't want to the mogwai to eat after midnight, you don't leave the chicken behind. You let them eat some and you take the leftovers away. Billy is so casual about all of this--even just breeding another mogwai and leaving it to the locals high school teacher to run some tests, because I guess he's the best scientist around--that I'm surprised that his dog has managed to survive at all. No wonder Barney acts out and messes with Mrs. Deagle's stuff.

Then, there's the rule about bright light. Now, there are species that live in dark places, pale and sometimes blind because colour doesn't matter in the dark. Mogwai, though are brown and white, with red noses on a few. Mohawk's black and white colouring in the sequel actually makes more sense for a species that lives in the dark. Mogwai also have large eyes with thick eyelids. Now, when they narrow them, one could suspect it's there's a racist dig at Chinese eyes going on, but it also sort of makes sense for a species that lives in the dark. Gremlin colouring, with the pale belly and whatnot makes sense for, say, a cave-swelling species... That crawls. It's actually weird that Gizmo crawls but the gremlins don't.

But that's a separate issue. I'm concerned with the rules.

As the Chinese boy lays out the rules (nevermind how Rand relays them):

Keep him out of the light. He hates bright light. Especially sunlight--it'll kill him.

And keep him away from water. Don't get him wet.

But the most important rule, the rule you can never forget, no matter how much he cries or how much he begs, never, never feed him after midnight.

But, these rules cannot be followed.

(And, on Gizmo's behalf, I'm a little offended that the boy thinks he's going to cry and beg for food, when clearly Gizmo is a good mogwai who doesn't do that sort of thing, or he would have long ago turned into a gremlin... unless, Gizmo is not even that old. See, I was assuming that Gizmo and the Chinese shopkeeper had a relationship the way they're conversing at the end of the film, but I've already established that mogwai are born intelligent, so there is actually no reason to assume that these two know each other, just that the shopkeeper can communicate with Gizmo and I'm betting Gizmo can respect that over Billy's insistence on speaking English to him all the time.)

These rules are impossible. And the reasoning is simple: the mogwai/gremlins represent foreigners in general, and maybe Communists (Chinese Communists) specifically. The Cold War wasn't over yet. Gremlins clearly have some herd behavior, a collective. And, what do they do when they get to Dorry's Bar? They dress up like a whole bunch of American characters and archetypes. Like Communist spies, they are working on blending right in. They hang out at the bar, then they go see a movie--Snow White and the Seven Dwarfs, which oddly enough is about a bunch of workers--workers of the world unite, and all that--no wonder they can appreciate it. Thematically, then, Gremlins is about the very same invasion as Red Dawn a few months later. This is smalltown America being torn apart by a foreign mob... Leave it to a nice wholesome young man and young woman to save the day.

I was thinking about why Rand Peltzer is an inventor; seriously, it has absolutely nothing to do with the story. But, America sure loves its great inventors. We also love hapless losers who aren't quite making it, and Rand is the latter trying to be the former.

That's also why this movie--which came out in June, mind you--is set around Christmas. Christmas, regardless of its origins, has turned into a very Western holiday, all about spending money, all about greed, all about me, me, me. There is no room for the collective of Communism or gremlins on Christmas. The final battle here happens in the department store because in 1984 that was how we could defeat Communism; we could buy and buy and buy, consume and consume until there was no room on the planet for those Christmas-hating Commies.