and, that's how i found out there's no santa claus

For a Christmas movie, Gremlins starts with some seriously shady goings on. With the voiceover from the Rand Peltzer (Hoyt Axton)--which I had totally forgotten was a thing--it's like some film noir detective story, except with a whole lot of red thrown into the color scheme.

Then he pulls out his "bathroom buddy" invention and things get silly.

Then the Mogwai shows up, with some adorable singing, and we drift into some white privilege territory with Rand thinking he can just automatically buy anything he wants to buy just... because.

Kidding. I mean, yeah, I'm totally right about that, and it may mean that the entire Gremlins incident may just be a warning about what happens when we do not check our privilege. But, I was specifically looking to not get into politics or social commentary today...

Which, when I think about it now, is pretty stupid. As I have argued many times about movies in this blog, every movie can tell us a lot about the time and place where it was made... This was, of course made at Universal Studios, just a few miles from here--Kingston Falls' town square would be the town square for Hill Valley a year later in Back to the Future.

It's 1984, tipping over the peak of the Cold War. Rambo has not turned into a right wing attempt to re-fight Vietnam yet. Rocky hadn't fought against Drago. Red Dawn would put Russians in Middle America a few months after this (and introduce the PG-13 rating to US cinema, a rating inspired by this film (Gremlins) and Indiana Jones and the Temple of Doom).

INTERJECTION: Gerald (Judge Reinhold) is very much for capitalism... The commentary almost cannot be stopped.

That we have not genetically engineered Mogwais yet is criminal. Gizmo is adorable, and has perfect pitch. (Though, I am not sure if you're supposed to take him to an all-night dry cleaners when he gets dirty or what.)

OBSERVATION: The Peltzer Peeler Juicer might be messy but could probably save the world. Out of one orange it managed to create at least a carton worth of juice. Mogwais, as efficiently as they reproduce and grow to full size could also be a good food resource for the hungry of the world. Maybe we're back to the white privilege thing that these creatures are being wasted on the entertainment of an American teenager (and Rand's notion of replacing the dog as the family pet)... Except, they were-- or, rather, Gizmo was languishing in that Chinese shop. All we gotta do is eat them before they turn into Gremlins--maybe before they even grow to full size, just skin em and fry em up when they're still spherical--and there's no chance they'll take over the world. Of course, with their apparent intelligence immediately after they are born, I am not so sure they even need to turn into Gremlins to outcompete every other species on the planet

INTERJECTION: Futterman, again--foreigners put Gremlins in all the machines we import. Good to know.

And, I have not even mentioned how Billy (Zach Galligan) and Kate (Phoebe Cates) work at a bank, and she also works in a bar; she's destroying America in more ways than one...

Kate is awesome, such a downer.

Futterman isn't back again yet, but he's got me thinking--see, in an earlier version of the script, Gizmo was supposed to also turn into a Gremlin. There was no Stripe character. Futterman's distrust of foreign things would have totally played right through the rest of the film... Foreign pets destroy everything good about America and Christmas, News at 11.

And, I should totally be recording a live commentary track. Audio, I mean. When Mr. Hanson (Glynn Turman) says the Mogwai are going through changes and Pete (Corey Feldman) responds, "Like my mother," I may have let out an impulsive "Yes" and/or some applause. This movie is like peak-80s-levels in humor and cleverness, plus heading into horror as it goes.

INTERJECTION: I'm not entirely sure what's up with Mrs. Deagle (Polly Holliday). She's got some Miss Gulch-level evil there, threatening quite explicitly to kill Billy's dog. Maybe the film just needs at least one victim later to be someone we will cheer the death of.

Gizmo on the dartboard is such a sad image... but I think I might be okay with the existence of this: 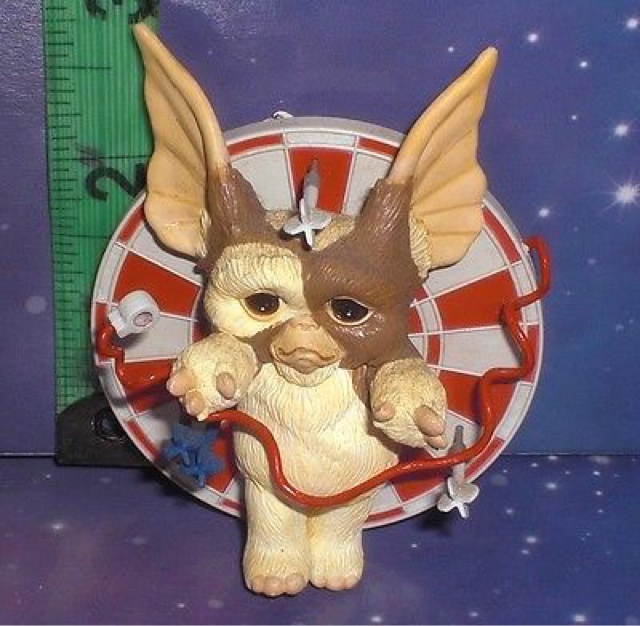 Meanwhile, as Lynn Peltzer (Frances Lee McCain) kills off a few Gremlins (with food processor and microwave, even), I get distracted by Box Office Mojo because damn if the weekend this movie came out wasn't a great one; in order, you got Ghostbusters and Gremlins in their opening weekend, Indiana Jones and the Temple of Doom in its third, Star Trek III: The Search for Spock in its second, Beat Street (the only movie on this top thirteen list that came up that I haven't seen) in its first, then at varying distances from their releases, The Natural, Romancing the Stone, Breakin', Streets of Fire, Police Academy, Once Upon a Time in America, Sixteen Candles, and Footloose.

I don't think we're supposed to cheer when Futterman gets killed, but I'm as okay with it as Deagle's, as anti-foreigner as Futterman is. Plus, they're both dependent on technology, and this film has all the technology failing...

The Gremlins are super-intelligent. The fact that one learns English in the sequel because of some intelligence-altering experiment or whatever it is is kind of offensive, like the English language is the end-all be-all of languages and intelligence. These things have been alive less than a day and they are successfully sabotaging vehicles and stair-climbing chairs, and they have already figured out not only how to wear scarves and hats but how to imitate Christmas Carolers. (Keep in mind, on that last one, that this batch of Gremlins were not the Mogwais hanging out in Billy's room, potentially watching some television and learning about our culture. Just the fact that these Gremlins can identify vehicles, when they are not even being operated, is amazing. They do not need some experimental serum to be smart. Hell, Stripe could read Deagle's name off a sign. They don't speak English because they don't need to speak English because they could probably destroy the Western World in a matter of days. We should be learning Gremlin, or whatever they call their language, and begging for jobs, though I'm not sure what they might need from us.

The flasher is hilarious. 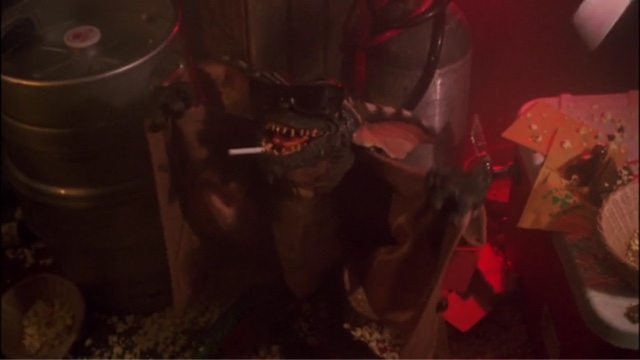 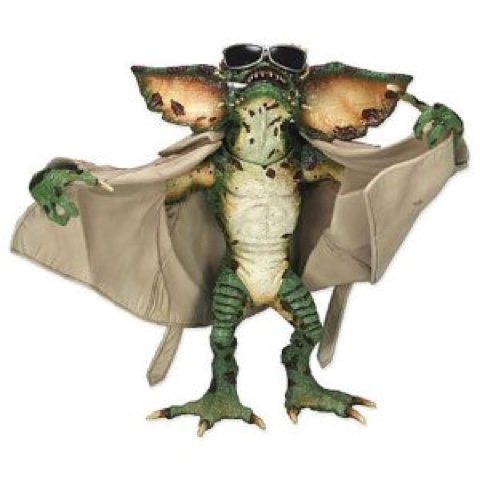 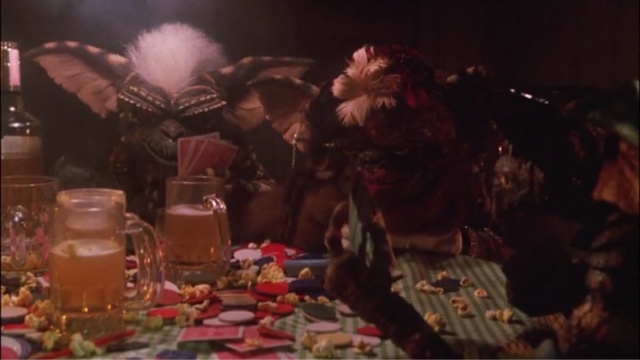 (Trying to Google an image of that one, unfortunately, got me Boglins.) 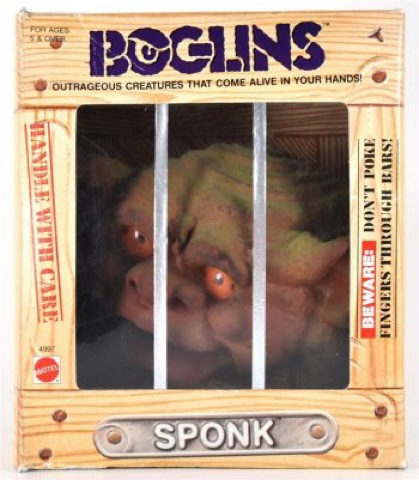 Here's a screencap of the real thing: 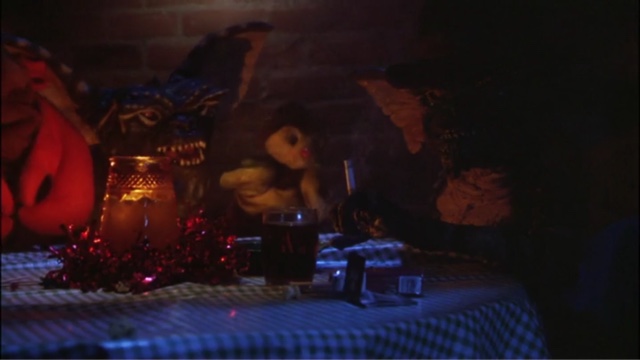 --and they've figure out how to play video games, how to operate a beer tap, a portable radio, a film projector, a snow plow... The list goes on. (I think we have our answer as to why no one has genetically engineered these things. We would be doomed.)

And, now Kate is being a downer again. Family film with graphic violence and this story about her father dying in the chimney... Awesome stuff.

A skateboard, a department store video camera, a whole bunch of mechanical toys, a tricycle, a pitching machine, a crossbow... and most of these things, there just is no time to see these things and figure it out. Stripe just knows. Now, he's got a chainsaw. He knows the word "water" and the word "gun" and Gizmo can drive a car. Mogwais might even be more advanced than Time Lords. For that matter, they might be Time Lords. Why else stage this invasion in Kingston Falls, AKA Hill Valley? They needed Doc Brown... Or one of them was Doc Brown.

The way Rand shows up at the end, in retrospect--a little suspicious. He might actually be some future incarnation of Gizmo, setting up this entire invasion through time travel. He might be Doc Brown.

Seriously, though, this film is awesome. I had forgotten how good it was.

Plus, old Chinese guy offers up a nice "moral of the story" moment--

You do with Mogwai what your society has done with al of nature's gifts. You do not understand. You are not ready.

Somebody should have followed that up with, in the modern parlance, "Oh, snap!"