that's the problem with old men

Also, I did see The Hateful Eight today. And, I've got a love/hate relationship with its Tarantino. Not love it or hate it, but more like both at the same time. I mean, take Super Panavision 70mm, use it beautifully for a some landscape shots and a bit of the first act Stagecoach... homage? ripoff? Then, you set most of the film in an enclosed space where the wide shot really doesn't matter that much. Take the requisite A [insert director's name] Film and turn it into the pretentious the 8th film by Quentin Tarantino and then give us chapter headings as well? Tarantino has these tics that bug the crap out of me. And he's arrogant. (Don't get me started on his tiff with the Cinerama Dome, because, yeah, they want to take Star Wars out after a week.) But, the guy can make a film. I mean, sure, The Hateful Eight hits a lot of beats we've seen before, and Kurt Russell is doing his best John Wayne and Walter Goggins and Samuel L. Jackson are mostly playing their usual characters--

(Which really isn't necessarily that bad a thing when it comes to a western, I suppose. I mean, watching all those westerns back in June, aside from all those story fixtures that Wright explores in Sixguns and Society, you get a whole lot of actors who the genre keeps returning to--personas that you just don't expect to be that different from film to film. It's a genre built on tough guys, not necessarily emotionally deep, seriously acting, guys. Even John Wayne in The Searchers--clearly Ethan is an emotionally deep guy going through some shit, but most of that comes from his actions, and occasionally in his words, but you don't go to a John Wayne film expecting long moments of emoting. As long as you can tell one character from another within a specific film, that's good enough. Sometimes.)

--but it's still a solid film.

By the way, on the commentary track here, they just commented on the chapter titles in this film, and I gotta say, they work better here than in The Hateful Eight. Here, they tie together with the voiceover to make this feel like a pulp novel thrown up onto the big screen. For westerns, except for, say, How the West Was Won--which is not the western vibe you want to go for... ever--westerns don't do the chapter thing. Westerns are more straightforward. You don't get a lot of flashbacks, certainly not extended ones like in The Hateful Eight. Despite some complaints I've seen about The Hateful Eight and its excessive dialogue, it's not like westerns are all action all the time.

And, for the record, Kurt Russell's John Wayne is great. 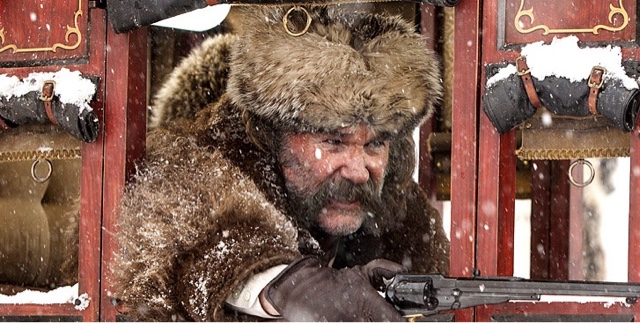 Plus, Tarantino should totally try his hand at a hard boiled detective story, with voiceover...

Oh, there's that. Fourth chapter of The Hateful Eight and had to be more than an hour in and suddenly Tarantino himself starts doing some narration like he's going for a Hugh-Ross-in-The-Assassination-of-Jesse-James-by-the-Coward-Robert-Ford vibe and it doesn't really work, and doesn't give us any information the film won't provide us later. And, it's only around for a minute or two, then even more briefly at one later point in the film. It's just so arbitrary. Meanwhile, here I am watching Kiss Kiss Bang Bang where voiceover adds real information, adds jokes, adds more depth to the main character and deconstructs the film itself. Obviously, I'm not a huge fan of voiceover, but it can be used well.

And, as I think I already said, I liked The Hateful Eight. I'm just better at being negative than being positive. I could get into SPOILER territory and complain about who turns out to be the bad guy in the film, but really, the various characters worked (Jennifer Jason Leigh's Daisy is so over-the-top in some moments that he subtle moments almost get lost, but she deserves the nominations she's getting for the role) and their interactions were good. The Tarantino dialogue--if you like that sort of thing--was, as they say, on point.

And, the commentary track on Kiss Kiss Bang Bang is as distracting as the film is. These guys are hilarious.