i wish i was special

Warning: there will be swearing.

I've been meaning to get to this film for a while now. Kept trying to fit it into my week-with-a-movie format in phase two of this blog, never found a place for it. It's got nothing to do with werewolves, by the way, so maybe I still haven't found the place for it. Imagine it as a transition into whatever comes next. (Plus the other day, I started a rant about gun control with this film's title, so to speak. The film's actual title: S.F.W.. What it stands for: So Fucking What?

Why have I been trying to get to it for a while, you may ask. Because it was cowritten by none other than Danny Rubin, creator of Groundhog Day. (Based on a novel, apparently--a detail I had completely missed until right now during the opening titles.)

If you don't know the movie, the setup is that a terrorist group called Split Image took a convenience store hostage (with five hostages originally) and aired the next 36 days live on TV. The film opens on the last day of the "Fun Stop Hostage Crisis" when the three surviving hostages--Cliff Spab (Stephen Dorff), Wendy Pfister (Reese Witherspoon), and Joe Dice (Jak Noseworthy)--finally fight back because, well, they've run out of a beer. Cut to the hospital and Spab is visited by a nurse who takes a picture of him sleeping, his parents telling him there will be 3 television movies telling his story, FBI Agent Gerald Parsley (Richard Portnow) who suspects Spab was in on the whole thing, and a few others. Then we see Wendy being interviewed on TV and the new setup is clear--these people became famous and didn't get to find out until afterward.

Figure on an indictment of reality television (which was only in its infancy then), of the media, of fame.

Also, figure on a lot of swearing because, for example, "So fucking what?" is Spab's way of dealing with the things he can't control, like being held hostage. 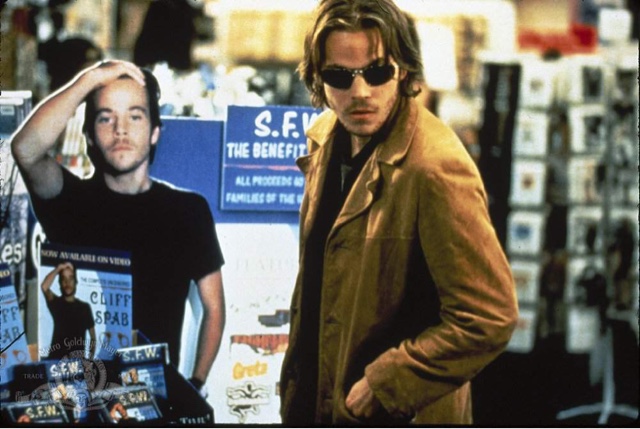 (And, I just learned that searching for SFW in Google Images results in--what I see in retrospect as obvious--nearly pornographic images. "SFW movie" does a bit better.)

Running back to my go-to Roger Ebert, some of what he sees as negative about this film--and especially the character of Cliff Spab--is what I think works best in this film. He calls the film "a portrait of the most singularly stupid, obnoxious character I've seen on the screen in many a day--which would be promising, if he were not boring, as well." Maybe it's because I am only a few years younger than Dorff and was roughly the same age as Spab when this came out that I can relate to the guy. I don't find him boring at all. I don't however fault Ebert for suggesting that Spab "is culturally deprived, has a low I.Q., is narcissistic and alcoholic, and has one of those vocabularies in which the most popular four-letter word is used in an all-purpose substitute for thousands of other words unknown to the speaker."

(Oh, I've got plans for With Honors.)

--Airheads, Brainscan, plus, yeah, a werewolf movie in Wolf. That's not all the notable movies, of course. This list is missing the big ones like Forrest Gump or True Lies or The Shawshank Redemption, or one of the best movies (according to me) that year--Ed Wood. This was a great movie year for me, a lot of irreverent stuff, a lot of interesting Generation X stuff. And, this was a great movie for me. When this movie came out, I hadn't dropped out of college yet, but I'm not sure how well college was going for me so far...

Morrow (Jake Busey) exists in this film just to make Spab seem like a nice, well-balanced guy, I'm pretty sure.

I was in that (age-appropriate) point in my life where I was figuring out who I was going to be. And, I was failing at it. Spab was someone to be. In my 20s I certainly tried to have a horrible attitude about life like he does. I also held down a series of office jobs. That I didn't like. I found my way to deal with them--my so fucking what?, I suppose--listening to talk radio all day.

In retrospect, the whole Generation X thing was like background noise... and a driving force telling us who to be and how to be it. Being irreverent assholes was a big part of it.

Keep in mind, this was before we had Twitter and Instagram and Facebook and what have you to indulge our narcissism, so we had to grab attention however we could.

(And I gotta interrupt for two reasons: 1) this movie is going to repeat tomorrow (or possibly the next day; I might see a movie in the theater tomorrow). I've barely dealt with the actual content of the movie. 2) Phil Connors and his wife Rita just showed up. This is the kind of detail that I needed to mention back in phase one of this blog, with Groundhog Day every day, but I didn't own S.F.W. on DVD back then, and I don't think I expected it to tie into Groundhog Day so explicitly. Phil and Rita seem to have settled into a new life after the whole time loop thing. They look very different, too, and not just because they are played by Lenny Wolpe and Natalie Strauss. One the one hand, we can assume this is just a joke Danny Rubin threw in because these one-off characters needed names. But, on the other hand, maybe this is where Rubin thinks Phil and Rita would end up, as convention goers who looks so very mainstream. Maybe that's where we all will end up. As Buddy (Kevin Spacey) in Swimming with Sharks puts it:

I was young too. I felt just like you. Hated authority, hated all my bosses, thought they were full of shit. Look, it's like they say, if you're not a rebel by the age of 20, you got not heart, but if you haven't turned establishment by 30, you've got no brains. Because there are no storybook romances, no fairy tale endings. So, before you run out and change the world, ask yourself, "What do you really want?"