At the start of Bulworth, Senator Jay Billington Bulworth (Warren Beatty, also directing and co-writing) is in the middle of a crisis. His vote is expected by a particular lobby--something to do with an insurance bill--but he's... Well, he's over it. He's been up all night watching his campaign ads, and he's... He's depressed. Tired of lying, I suppose. He hasn't eaten or slept in three days. And, he's about to hire someone to kill him after making a $10 million deal with a lobbyist for his daughter. He doesn't get along with his wife (Christine Baranski, playing her coolest) but I suppose he cares about his daughter. We don't meet her, so we must assume.

He's off to a junket in Los Angeles, starting with an African-American church, when one of those ads he was watching before was against affirmative action; I don't think we can assume that he has much support among the African-American community.

For the record, I've seen this movie many times, so when I write as if I'm just imagining what's coming or what's going on, that's just me being... me.

In fact, I've not only seen the movie several times, I used parts of Bulworth's speeches and raps in an interpretive speech my senior year in forensics. So, for a while there, I had a good chunk of this film memorized word-for-word. Looking at the "quotes" section on IMDb just now, I don't quite know it all anymore, but I can get right back into the rhythm reciting it.

Now, this evening I watched (and tweeted and retweeted about) the latest Republican Presidential debate... Two debates, actually: an undercard with four debaters and the main event with nine. And, I don't mean to put this just on the Republicans, even as much as I tend to disagree with them; the Democrats do the same stuff in their debates. It's a whole lot of platitudes and rhetoric, little of it feeling that genuine. I don't need them to rap like Bulworth ends up doing, but a little honesty would be nice. The thing about this movie is that the guy who's clearly a criminal--LD (Don Cheadle)--as much as he's clearly fronting to intimidate people, is more honest than a politician. 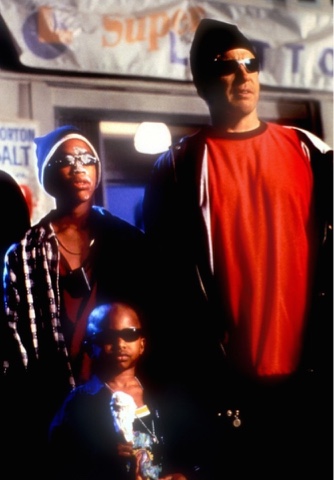 Now, on the one hand, I love the way this movie plays with the idea that a politician can only actually be honest and blunt when he has effectively chosen not to be a politician anymore. On the other hand, it might be a simplistic presentation of depression and mania. And, there's room here to talk about politics, of course, but there's a more interesting angle in the notion that Jay Bullington Bulworth is at his most human when he stops being bought and paid for.

(Roger Ebert, in his review, says the movie "presents black culture as automatically more authentic and truthful than white" and calls this a "knee-jerk." But, I don't think it's a) automatic, nor b) really comparing the two. The dichotomy Ebert suggests is not really the one the film offers up. The film never delves into "white culture." Instead, it counters Washington D.C. Culture (which happens to be primarily white because, you know, a whole lot of history and baggage) with urban culture (which happens to be primarily black, in this instance, because of that same history and baggage). The surface divides at race, but really no one around Bulworth is representative of "white" culture. They are all a little more overtly privileged, linked in to the political world. Bulworth is not a member of "white" culture, but has already long ago risen above that into something else entirely... Well, because of that aforementioned "history" and "baggage" I guess "entirely" is overselling it. As Bulworth points out in the debate, the moderator is getting paid a lot of money by some rich guys to ask questions of two rich guys so a bunch of other rich guys can watch it. He's already told his urban (black) constituents that they are not a significant factor. He works for the rich (white) guys who can pay him off. Later he'll suggest that it's the right people who fuel that racial divide in the first place, so they can stay on top.)

Effectively, that means politicians are not human. But, it also means that any of us can become something we're not if the price is right. And, that's not just a price in money, of course. We can compromise our identity for anything that, temporarily, seems more... convenient? pleasant? awesome? A relationship, a job, a chance opportunity to try something crazy--whatever it is, you put aside your self and try on someone new. Here, Bulworth seems like he's becoming someone more real, more genuine, than he was before. Meanwhile, his aid (Oliver Platt) has his own sort of breakdown, a far more shallow one; he basically starts snorting cocaine and ranting in favor of his boss' new approach to campaigning. Compare the two, and in filmic terms, we know that Bulworth is genuine. Also, we compare Nina (Halle Berry) and LD and their words that Bulworth appropriates and we see that honesty is not coming from inside Bulworth. He wants it but cannot quite produce it without help. He's just been inauthentic for too long.

(Sidenote on that appropriation, of course, is that Bulworth is appropriating the lines of black characters, but those words were written by Warren Beatty (and Jeremy Pikser)... based on some notion of what he thinks those characters would say. So, take of that what you will.)