all part of growing up

Two things: 1) after getting all serious yesterday with Barthes and punctum, today I'm going with a movie I remember as fairly ridiculous and 2) for a ridiculous movie, this opening music and closeup on Scott Howard (Michael J. Fox) all sweaty and about to shoot a free throw is, well, far too serious, and a little full of itself. It has been a good long while since I'e seen this movie but "pretentious" is not at all a term I might be using watching it again.

Anyway, Teen Wolf. I'm figuring this is going to be all obvious with the metaphor (like Ginger Snaps)--lycanthropy as puberty. (Or vice versa.) In a DVD extra with (I think) the third Ginger Snaps film--Menstrual Monsters--Tanya Krzywinska, Reader in Film, Brunel University, references "old myths about transformation into animal form, and [how] a lot of those myths are about what it is to become uncivilized." In terms of the puberty metaphor, it is the hormonal teenager who is uncivilized.

Here, for example, Scott plays basketball and works at his father's hardware store, he's cleancut, he's got friends, and like many a 1980s cinematic high school male, he's got a crush on a girl who just might be a bit out of his league (and he's got a good friend who's also a girl and has a crush on him). He's perfectly normal, is the thing.

But now, he is thinking of quitting basketball, and he's going to a party where there's beer and weirdly sexual games. Plus, of course, his body is going through some changes, his voice changing, hair growing where there wasn't any before, etcetera. 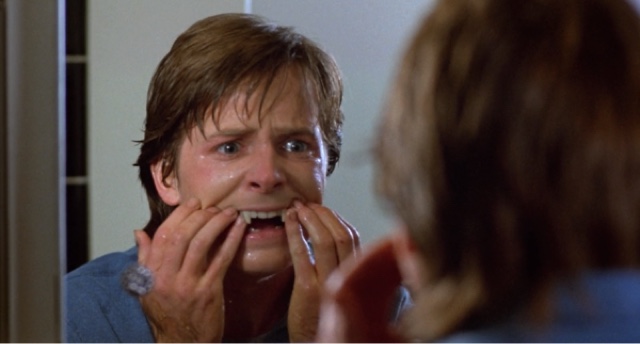 Before anyone nitpicks, yeah, Scott is less a werewolf and more a wolfman. But, otherwise, the setup is the same. Plus, to be fair, Scott's father (James Hampton) specifically refers to their kind as "werewolves" so maybe I preemptively nitpicked too soon.

Missed opportunity just now--Stiles (Jerry Levine) is looking for his "stash" to smoke and then Scott reveals to him that he is a werewolf, but does Stiles get all 1980s-drug-fueled-paranoid and think he already smoked his stash? Nope.

Stiles, of course, accepts Scott right away. It takes slightly longer for everyone else to accept him in the middle of the next basketball game. Though I know it's not going to happen, I kind of wish a bunch of vampires or some werewolf council showed up now to put Scott down. But, that would distract from the metaphor. Scott is not anything weird; he's just a guy who is a late bloomer, and the sudden changes in his body have made him a better athlete and that has made him popular. (Like Ginger strutting down the hall with all the guys checking her out.) Hell, the scene at the dance is echoed two years later in Can't Buy Me Love, everybody copying Ronald like they copy Scott here.

Ultimately, you accept the 80s cheese (of which there actually is not as much as in a lot of 80s movies) and embrace the 80s soundtrack and this film works pretty well. A simple enough story about learning to be one's self.

My biggest nitpick is that Scott is the wolf and the wolf is Scott. His father should not be so intent on him staying in the closet, so to speak.