say yes to everything

I was prepared to make some sort of joke about Carol relating to Christmas because, you know, Christmas Carols, and then not ten minutes into the movie I realize it's actually set around Christmas and Carol (Cate Blanchett) first meets Therese (Rooney Mara), she (Therese) is wearing a Santa hat. My actual Christmas movie for today is In Bruges--it's playing now. I didn't expect to really be arguing that Carol is a Christmas film.. 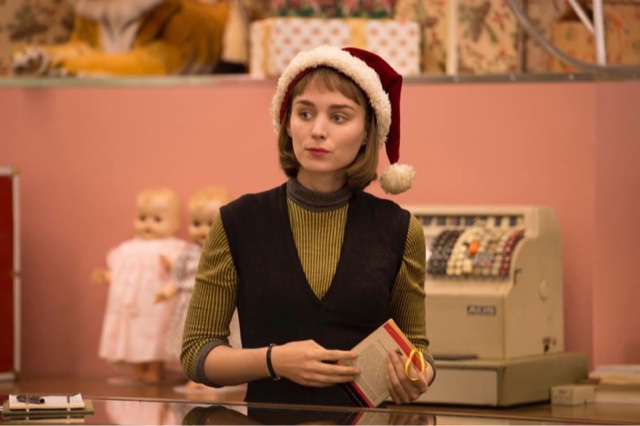 Note: This blog has had a few extra views of late, probably because of my one two Star Wars The Force Awakens entries. I wanted to note for new readers that I do not generally review films. If you want a review of Carol, try NPR or the International Business Times or the Boston Herald or Screen Crush or wherever you like to find movie reviews. I don't know what to call what I do. I take a movie and maybe deconstruct it, or maybe tie it to some... other thing, or link two movies (Carol links really well to yesterday's Brooklyn, for instance, with the '50s romance bit, except instead of Therese getting together with a working-class Italian guy as Eilis (Saoirse Ronan) does, she gets together with a rich white woman in the process of getting a divorce) , or ignore the movie almost entirely so I can rant about something else. I perfected this do-whatever-I-like format during phase one--365 days in a row watching Groundhog Day.

All that is to say, I could probably make the argument that any film is in some way a "Christmas film." But, Carol and In Bruges--both are actually set around Christmas so that will make my job a lot easier.

I'm not sure romance is really the Christmas thing, but so many Christmas movies do involve romance and love because what greater joy is there than being in love? Carol is not, strictly speaking, a lesbian love story. Aside from the whole "morality clause" thing that comes into play regarding Carol's divorce, it doesn't much matter that these are two women; yeah, the '50s setting means their love is forbidden, but really they are just two people in love. Under Todd Haynes' direction, the film takes its time, and the joy remains just a little out of reach.

In Bruges, on the other hand, is more about the melancholy of the season. An AV Club piece refers to the "existential weight of the season hang[ing] so strongly over the film." Instead of a forbidden love, it is an accidental death here that holds back... I don't know, the joy of the holiday season, I suppose. Ray (Colin Farrell) has his moments of joy--when he first sees a "midget" (Jordan Prentice) or a pretty girl (Clémence Poésy>--but he cannot seem to enjoy his exile to Bruges after a botched assassination. Meanwhile, his partner Ken (Brendan Gleeson) wants to sightsee.

Together, these two films are about obstacles that keep us from being happy. A married woman who wants to be with a younger woman or a hitman who wants not to have accidentally killed a mother and child--they are both as human as anyone else, deserving of, and wanting to be happy. Especially around Christmas, when everything is fancy lights and decorations and gifts and "Joy to the World" and all that. I think the notion that suicides happen more around Christmas is untrue, but it's no surprise that the idea keeps getting told and retold--it makes sense that those who can't be happy at Christmas would be sad--acknowledging any middle ground there is too complicated and mostly we just can't be bothered. And maybe we figure there's a limit to the amount of happiness the world can bear. The happier we are, the more sad the next guy must be to compensate, and vice versa--when we're sad, there's some asshole out there enjoying his life far too much, and that's unfair, so that just adds some anger to our sadness and we get bitter and hateful. And, that's what Christmas is all about: the black hole of sadness and anger--the dark side, if you will (since I've still got Star Wars on my mind)--and the bright warmth of family and friends and being able to have things.