when i was small, i only knew small things

It's 11pm as I start writing this entry. I've got an episode of That '70s Show on in the background. The house is quiet otherwise--kids are in South Carolina for a week visiting relatives. Earlier this evening, I had a nice dinner alone and then I watched Room. I'm not sure that I have much to say about the film. Brie Larson and Jacob Tremblay are fantastic, and the film has several moments that are painful to watch. In case you don't know the film, the premise is that Ma (Larson) was kidnapped seven years ago, and has been living in a locked shed every since--the titular room. Five years ago, she had her son Jack (Tremblay) and now that he's five she finally explains to him that there's a world outside the room. And, they escape--that isn't really a SPOILER, the revelation of why they're in this room is plot point one and the escape is at the half way mark, and really, them learning to live outside the room is the point. The film has a great sense of location, and uses the confined space of the the room well in its first half, and only gradually opens up to the outside world later, as Jack and Ma adjust to it. 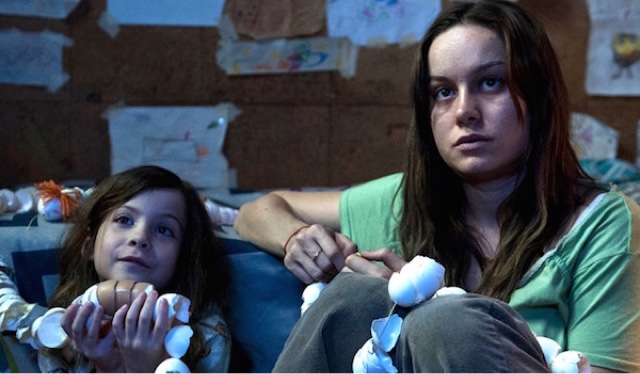 The portion of the film in the room, especially that first bit in which Jack simply doesn't understand that there's anything more outside, had me thinking about when I was as young. There's a potential metaphor in Room for any sheltered childhood or any closed-off life. Or just childhood in general, those years when we barely understand anything, though we probably think we know more than we do. For me, I think for example, of playing Star Wars--it's in my head after seeing The Force Awakens twice already. Fantasizing about being Luke Skywalker or Han Solo and that was better than real life. Real life was private school and church. Whole lot of fantasy in that last one but not as exciting as Star Wars or Beastmaster, Conan, Flash Gordon, Clash of the Titans, Krull, Raiders of the Lost Ark... well, I suppose that last one is not fantasy, but it was just as far removed from my reality at the time that it might as well have been.

Real life, sometimes--it's like being stuck in the same room day in and day out.

Tomorrow was supposed to be a work day, working on stuff for the upcoming winter quarter or sorting my research notes for the next section of my thesis. Maybe I should just take the day off and play instead.

Of course, that might just be me sitting around watching movies and writing about them.