The voiceover at the start of Network gives us like an entire other film's worth of plot. Howard Beale (Peter Finch) has just learned that he will be off the air in two weeks after his ratings have been in consistent decline of late. Also something about a problem with alcohol.

He tells Max Schumacher (William Holden) that he will kill himself on the air, then he even announces it on the air. This movie came out in 1976. In 1974, talk show host Christine Chubbock had killed herself live on the air.

Diana Christiansen (Faye Dunaway) who heads programming, wants to air footage of a bank robbery, filmed by a SLA-like group as they performed the robbery. She might even want to make a series out of it.

"The American people want somebody to articulate their rage for them." That's what a study Diana quotes says. And, I can't help but tie this into the present, the people who like Donald Trump as presidential candidate because "he says what I'm thinking."

It's remarkable how much Beale's rants still rings true. As I said the other day, when Roger Ebert suggested that Bulworth "seems to reflect a rising tide of discontent with current American political discourse," there's no rising tide. There's just the tide. American political discourse mostly sucks, and when you like a piece of it, you can be sure there's a whole lot of people who disagree with you, to varying degrees. We've been discontent pretty much as long as there's been discourse. Television made a go at objective news coverage for a while... Supposedly. That was long before I was around, but it seems like there were some great "newsmen" who America respected. Of course, there weren't so many channels back then, no social media, no space for anyone and everyone to say whatever the fuck he's thinking.

(No, the irony of saying that in a blog does not escape me.) 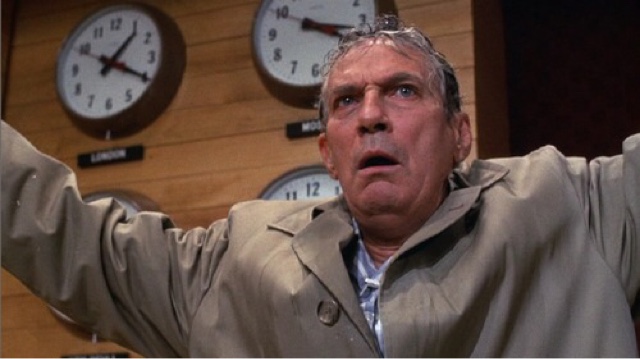 Of course, America would want to watch a guy like Howard Beale rant and rave. And of course, America wants to watch Donald Trump spew his offenses... Or his amazingly honest and open views that don't put up with PC standards. Whatever whomever wants to think of it as, it's entertaining until it becomes disgusting, then it circles back to entertaining all over again. We don't want reasoned debate. We don't want talk. We want anger, we want voices raised. We want it to feel like violence is coming before the soldiers have even been sent anywhere, before SWAT's been called in. When a cop kills an unarmed man, we should all be angry, but there are always those who stand up for the cop, say, "If the unarmed man would have just been obedient" or "just not been suspicious" or "just been white" ... I may have invented that last one--an impression hidden behind the words most of the time.

Diana offers Beale a show--he can be a "latter-day prophet denouncing the hypocrisy of our times." Of course he takes up that role. Who wouldn't want to take up that role? You get to speak your truth to the world, no censor but for you own inhibitions.

Personally, I've backed myself into a corner. My voice is here in a movie-centric blog, and in the occasional rant on Facebook. (Still finishing up my master's thesis, as well, but there isn't much in the way of politics in there at all.) I watch the presidential debates... The farce that is the presidential debates and I live-tweet 'em. But, sometimes, I wish I had more of a soapbox.

On the other hand, I'd bet that a whole lot of the newsmen (and newswomen) we have today think themselves modern incarnations of the likes of Howard Beale. Latter-day prophets and all that, on their 24-hour cable news soapboxes. Soapboxes aren't all good. You're better off helping out your fellow man directly than getting up on a soapbox (or a pulpit) and preaching.

And, that counters an argument I make with my students when we talk about persuasive speeches. I show them a photo by Kevin Carter--this one: 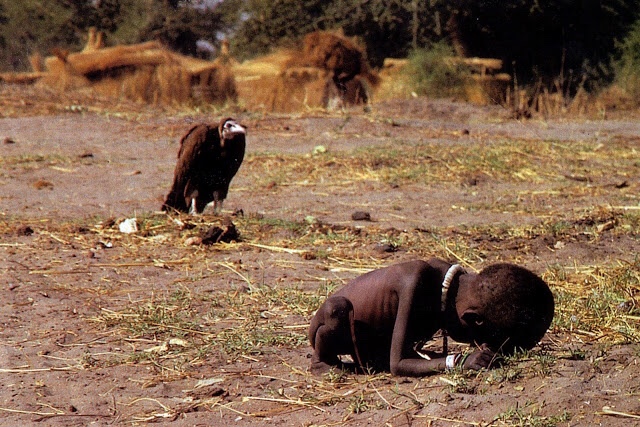 And, we talk about the responsibility of the photographer, whether taking the photo is enough, or if he has an obligation to help every sick or hungry or injured person he photographs in some direct way or if there is a place for photojournalism as a detached artform... Or if it is even "detached" at all. And, I take the side of the photojournalist, of course. Taking that photo--getting on the soapbox, as it were--can be enough if it gets the right eyes. Howard Beale's rants, however they may be fueled by psychological problems--they can be enough if the right ears hear him. But, what are the right eyes? What are the right ears? What are the right images and the right sound bites for them?

This is Howard's most famous rant:

I don't have to tell you things are bad.

Everybody knows things are bad.

It's a depression. Everybody's out of work or scared of losing their job. The dollar buys a nickel's worth, banks are going bust, shopkeepers keep a gun under the counter.

Punks are running wild in the street and there's nobody anywhere who seems to know what to do, and there's no end to it. We know the air is unfit to breathe and our food is unfit to eat, and we sit watching our TV's while some local newscaster tells us that today we had fifteen homicides and sixty-three violent crimes, as if that's the way it's supposed to be.

We know things are bad - worse than bad. They're crazy. It's like everything everywhere is going crazy, so we don't go out anymore. We sit in the house, and slowly the world we are living in is getting smaller, and all we say is, "Please, at least leave us alone in our living rooms. Let me have my toaster and my TV and my steel-belted radials and I won't say anything. Just leave us alone."

I want you to get up right now, sit up, go to your windows, open them and stick your head out and yell, "I'm as mad as hell and I'm not going to take this anymore!" Things have got to change. But first, you've gotta get mad!

And, the narrator tells us Howard's show settled into a 42 share. I don't think any broadcast has had a 42 share for decades now.

And, the rant that I like the most, I think, is the first one he gives on his overwrought show with all the production value (not just him at the news desk). It includes this:

...you're never going to get any truth from us. We'll tell you anything you want to hear; we lie like hell. We'll tell you that Kojak always gets the killer, or that nobody ever gets cancer at Archie Bunker's house, and no matter how much trouble the hero is in, don't worry, just look at your watch; at the end of the hour he's going to win.

We'll tell you any shit you want to hear. We deal in illusions, man! None of it is true! But you people sit there, day after day, night after night, all ages, colors, creeds.

And then he collapses like a televangelist overcome by the holy spirit.