the best ideals of our nation

Imagine it: last December, I was watching Christmas movies for this blog. It was nice and pleasant... Well, there was Black Christmas (with a brief venture into Silent Night, Deadly Night, but mostly it was... Nice. There was talk of filmmaking and screenplay structure and Christ-Figures, but mostly it was about how good people can and should be to one another. Or, at least, that is how I remember it. How I choose to remember it.

And, the year before, when I was stil watching Groundhog Day every day, I also squeezed in a silly little Christmas film--12 Dates of Christmas. This year, I find myself inclined toward more serious fare, toward lengthy rants like the other day. To be fair, December usually includes a lot of the more interesting movies for me since that is when Oscar hopefuls show up in theaters. This year, as well, there is a.... What shall I call it? There is an interesting political climate about in America. Donald Trump is still going strong in his campaign for the presidency, as are a few other Republican candidates, while the Democrats have mostly winnowed down to Hillary Clinton and Bernie Sanders. Meanwhile, you've got mass shootings--and a debate over what "mass" means in this instance because the important detail is whether we've had some 355 mass shootings or just a mere 67. And, by that phrasing alone, you can surely tell some of my thoughts on the subject. 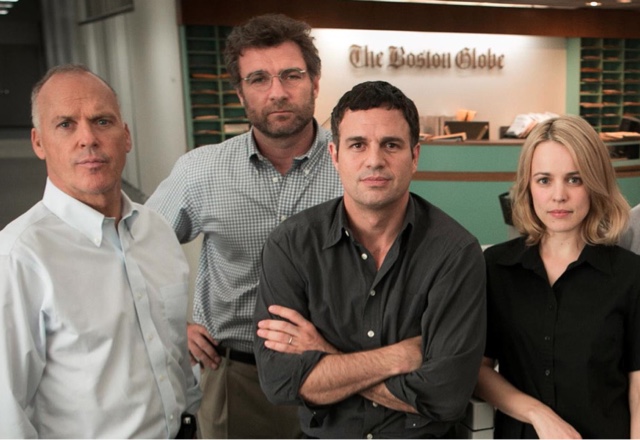 Today, I saw Spotlight in the theater. It's not exactly a political film, but it does involve bureaucracy and the politics of organizational self-protection.. That of the Catholic Church, in particular, and the larger circles of Catholics around Boston more generally. spotlight is the true story of how reporters from the Boston Globe exposed the Archdiocesan coverup of child molesting priests over several decades.

For the record, Christmas does actually come up in the film very briefly. But so do the attacks of September 11, 2001. The film has a very specific time and place and it would exist almost entirely within that limitation if it's topic wasn't something so common. And, I do not mean, specifically, the Catholic Church covering up after priests who prey on children, though clearly that was far larger a thing than the film has time to cover--a pre-credits list of cities where such cover ups have been found takes up five screens, three columns each. I refer less to the specifics and more to the general tendency of an institution to protect itself regardless of what is right or wrong. The survival instinct of an organization.

(I wonder if there's room to map this sort of thing onto, say a particular film franchise, cranking out uninspired sequels to try to stay relevant.)

I see the paranoia over "Islamic terrorists" and Syrian refugees as something akin to this; an amorphous, imagined enemy is dangerous when the institution--the United States--is having its own crisis...

Where I am right now is--deliberately seek out political films, find excuses to keep ranting, or turn something like the opposite direction, watch some fantasy films and leave reality aside for a while... Or both. Or neither.

I'm in the mood for some fun movies, but fun movies don't always leave much room for me to say anything about them.

I'm sure I'll figure something out.