he was a slacker, too

The opening shot of Back to the Future is almost perfect. All those clocks, the slow pan. That one clock that foreshadows the climax of the film. All of Doc Brown's morning routine--the radio and the clock, really?--and the automated machinery. Plus The plutonium is set up and gets a mini-pay off already with the end of that tracking shot.

The opening scene, if you move into the next bit, with the giant amp and Marty's particular style of "rock and roll", also sets up both a defining characteristic of Marty McFly--he tends toward too much--and a particular problem in what is often considered to be a flawless film. Seriously, people study this screenplay as an ideal example of screenwriting. (Nevermind, of course, the multiple drafts it took to get to the final product.) And it is fantastic in terms of structure, in terms of setup and payoff. Every scene serves a purpose. Characters and events all interact just so. But--and I've written a bit about this, for example, in connection with Star Wars Rogue One--some people like more of a character arc than Marty gets. Take one aspect of who he is--his music--the opening scene tells us what we need to know. he takes his music too far. In that first scene, it explodes the amp and knocks Marty across a room.

At the school audition, he and the Pinheads are "just too darn loud" and Marty laments, "We'll never get a chance to play in front of anybody." Jennifer tells him that "one rejection isn't the end of the world." We, of course, know nothing about his music other than what we just saw. He isn't untalented, but you gotta know your audience. "I just don't think I'm cut out for music," he says. Jennifer replies--and we have to trust her: "But you're really good, and your audition tape is great. You've got to send it in to the record company." That last line is just vague enough as to be both supportive and useless. The record company, as if there is only one. She adds a line that is a little strange--"It's like Doc's always saying... If you put your mind to it, you can accomplish anything." Except we never hear Doc say it (we do hear George say it in the new present at the end of the film, but he heard it from Marty) and it took Doc 30 years to accomplish his latest anything. And it took George those same thirty years to get his first novel published. I don't think Marty wants to wait that long. (Also--and I didn't want to bring the sequels into this just yet--Marty will not manage to make a living as a musician.) Marty offers up a line that George will echo in 1955 later: "What if I send in the tape and they don't like it? What if they say I'm no good? What if they say, 'You've got no future'? I can't take that kind of rejection." (Then, quite aptly, Marty adds, "I'm starting to sound like my old man.")

An aside: in the middle of that conversation, we get another bit of Marty's personality, although there is no payoff to this one. He checks out two girls who walk by in workout clothes. And Jennifer notices, but does very little about it. But, maybe she knows that Marty is too much of a coward to chase after someone else. Except, he's not really a coward to fear rejection. The coward thing--the chicken thing--that doesn't really become a thing until the second film, and then too much of a thing (like when "Bazinga" became a thing in the second season of Big Bang Theory and they wrote it like that was something Sheldon has always said). Marty is not afraid of being called "chicken", he's afraid of being nothing, and quite thematically appropriately, of being told he has no future. (That is something it seems Principal Strickland tells him all the time, but teenagers don't listen to teachers or principals, so that's probably in one ear and out the other.) 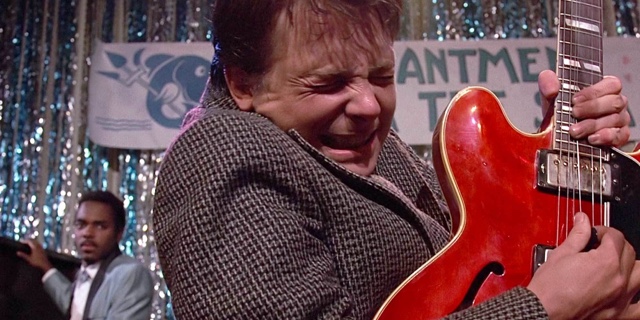 It isn't that Marty doesn't have musical talent/skill. He plays just fine when he's with the Starlighters (not to be confused with Starfighters), but even there, when he's given the chance to do his own thing, he takes it too far, has everyone in the room staring at him like's the alien he pretended to be a few nights earlier in his father's bedroom. The scene is funny. But it also demonstrates that Marty really hasn't learned anything about himself. He already had that line about sounding like his old man, even before he went back in time and learned that George was creative. That he maybe got his wandering eyes--which literally have no impact on any part of the story so don't feel all that important--from his mother doesn't mean much. So, what has Marty learned?

For that matter, who is Marty McFly? Who was he when the movie began and has he changed? At all.

At best, he had his fantasy of playing in front of an audience fulfilled and maybe that would give him the confidence to work toward it in the present. (There is actually a possible clue that this is the case, retroactively--like his father's confidence helped him be more confident, but that timeline just hasn't caught up to Marty yet, and maybe won't. Going by the second film, we can see that the timeline adjusts around Marty, not through him. He is still the same person he was before (but a week older).) That clue: Marty emerges from his bedroom in the new present with a padded envelope in hand, maybe it’s that audition tape, ready to be sent, and maybe he’s wondering who put it in an envelope because he surely didn’t.