pick out your partner and join in the fun

And, really, I could just leave it at that. That image is all you need to understand how amazingly hilarious and horrendous the dancing can be in Groundhog Day. So long, folks.

Or, I could say more. I could make it all formal. Like, for example, “A History of Social Dance in America” at American Antiquarian tells us that,

In the eighteenth and nineteenth centuries, dance became a forum for purposeful social activity; elaborate balls and private parties offered a means for a gentleman to seek his wife and allowed friends and family to share the new trends in music and dance.

Debbie doesn’t always dance like that, though. Note this bit from earlier. You can see Fred and Debbie at the bottom right.

But, why jump straight to the banquet at the end of the movie. Let’s go back to a group I like to refer to as the “crazies.” They’re at Gobbler’s Knob and we see them 3 times, never for much screen time, but when you watch the movie again and again, you start to pay attention to the extras in the background, folks like the old guy in the red hat— 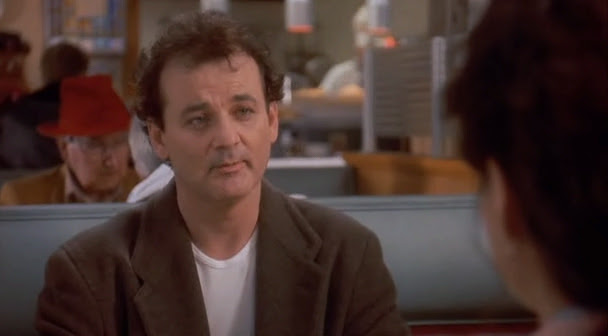 —he doesn’t even do anything, but something about him bugs me. Maybe because it’s one of the only appearances of the color red in the entire film, maybe because he’s trying a little too hard to not do anything…

(That reminds me, I’ve been wanting to do an entry about extras generally. I wanted to grab a clip from the NewsRadio episode that had the Pop-Up Video bubbles in which they mention wanting to edit out a particular extra because he was a little too distracting in the background, but I cannot find a copy of that episode that still includes the bubbles. But, as I said yesterday, that’s life.)

But, I was talking about the Crazies—and I don’t mean the George A. Romero movie or its remake. Here’s the first clip of the Crazies (they are on the left):

Now, there are people all over Gobbler’s Knob getting into the music. I don’t know if music was actually playing as they filmed or they were all just faking it, but the extras do their thing for sure. The Crazies certainly get into it.

And, so do those people in the gazebo, who we see on Day 1:

But, before we even get to Day 29, we get some nice, sweet dancing on Day 10, the night Phil’s date with Rita almost goes perfectly. Here that is:

But, I was going to take this seriously. For example, the book The Dance by “An Antiquary” provides this illustration: 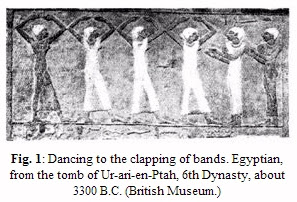 Folks were not only already dancing socially, but they were putting images of it on the “movies” of the day, that is tomb walls. There are even instructional “videos”:

And, this image almost looks like a how-to-dance-like-Debbie guide:

But, why get into a serious discussion of dancing when we can look at stuff like this:

And I really wish there were enough of this to have him totally rotate:

Really, I think we should all take a lesson from Debbie (or Rita or Larry for that matter). Dance like no one’s watching. Hell, Buster’s got a good take on what you should do for fun:

Once you’ve figured out how to have fun, then worry about saving lives and changing tires for old ladies.

Today’s reason to repeat a day forever: to dance more, even if it’s just by myself at home.