you can go ahead and freeze to death

I’ve dealt with obituaries before in this blog—Jane Catherine Lotter, an author who wrote her own; Martin Manley, a sportswriter who planned and blogged about his suicide; and even Lucina Paquet Gabbard, who played a small part in Groundhog Day—so I thought it worth bringing up this bit from an obituary I saw online today:

Marianne Theresa Johnson-Reddick born Jan 4, 1935 and died alone on Aug. 30, 2013. She is survived by her 6 of 8 children whom she spent her lifetime torturing in every way possible. While she neglected and abused her small children, she refused to allow anyone else to care or show compassion towards them. When they became adults she stalked and tortured anyone they dared to love. Everyone she met, adult or child was tortured by her cruelty and exposure to violence, criminal activity, vulgarity, and hatred of the gentle or kind human spirit.

It reminded me of Orson Scott Card’s Speaker for the Dead, in which a Speaker spends time with and interviews those who knew the deceased and presents an objective and honest view instead of the usual blemishes airbrushed away eulogy one might get at the modern funeral. Johnson-Reddick’s obituary was apparently authored by some of her children which “she so abrasively exposed to her evil and violent life.” They “celebrate her passing from this earth and hope she lives in the after-life reliving each gesture of violence, cruelty, and shame that she delivered on her children.”

While it sounds like they’re hoping for a little eternal recurrence for their mother (but not necessarily themselves), today is not for more discussion of Nietzsche. Instead, in dealing with obituaries and death, I wanted to return to “12:01 P.M.” I finally read Lupoff’s original story today and it’s quite remarkable how close the short film 12:01 P.M. comes to the story. Aside from a change in setting—the short film is clearly filmed in Los Angeles while the story is set in New York—and a few stray details here and there, it’s a fairly faithful adaptation.

A quick note for those who haven’t been keeping up, I wrote about Lupoff’s story and its two adaptations back on Day 28. Short version: Lupoff’s story was published in 1973, the Oscar-nominated short film was released in 1990, and the TV movie aired in 1993, the same year as Groundhog Day was in theaters—Groundhog Day was released in February, 12:01 aired in July, and at the time I thought the TV movie was capitalizing on the success of Groundhog Day, which maybe it was in a way, but it was actually alleged that Groundhog Day stole its premise from Lupoff’s story. Anyway, I already reviewed the two movies, so click back if you want to read about them in more detail.

As for the story—and how it relates to obituaries and death—I don’t think it occurred to me watching the short film that the time bounce was the end of the world. While we’re stuck with Myron Castleman, who ,much like Phil Connors is stuck in a loop, albeit a much shorter one, and the ending of him being in the loop forever is rather bleak… and, apparently, I should start reading my own blog. I just glanced at the earlier entry and found this:

...the even more bleak implication is that the time bounce will happen forever (which makes the film even more depressing if you think about too much, because the rest of the world has essentially ceased to go on). And, for Castleman, he finally makes his way to the scientist who knows what’s going on and convinces the guy that he’s consciously experiencing the bounce because “consciousness is an independent variable” and learns the horrible truth—there is nothing he can do to stop it.

The good news: I’m not as inattentive as I was thinking. The bad news: I am forgetful.

But, anyway, the time bounce means the end of the world, the end of time. Myron Castleman is the only one who knows and can experience it and he will be stuck in that same hour forever. Unlike Phil Connors’ stay in Punxsutawney, there is a reason for Myron’s plight. In the original story, the explanation is given in cryptic detail:

“Look,” the round-faced man said, “Rosenbluth claims that the total energy content of the universe we live in is mirrored by a counteruniverse made of anti-matter, coexisting with our universe in terms of three-dimensional space but separated from us by a fourth dimension or vibrational plane…

“Rosenbluth claims that by random but not acausal processes the two universes, moving in opposite temporal directions, attempt to emerge from their dimensionally separated states and merge. If this should come about, they would cancel each other because of their opposite energy polarities, but the phenomenon of opposing time-vectors prevents this, and they will instead rebound from each other, each universe snapping backwards, into its own past—that is, the other universe’s future…”

It’s a bit wordy, and seems just nonsensical enough as to a) be irrelevant or b) make total sense in a Star Trek sort of way. But, then I really want a Mirror universe Phil Connors to show up in Groundhog Day just to change things up one in one of these viewings. He’d probably look a little like this: 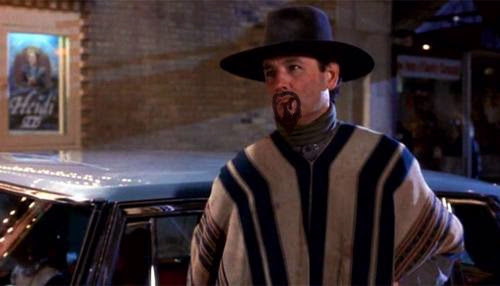 The important detail that comes up in the short film is that notion of consciousness as an “independent variable.” In theory, we could figure there are people experiencing the time bounce just like Myron Castleman is (or like Phil Connors in Rubin’s original… unless those people are crazy) though what would be the chances they’d be near enough geographically for it to matter? I mean, 1973, 1990, not like they’ve got the internet so they could at least skype a bit and brainstorm for new things to do when you’ve only got one hour.

There are some interesting details in “12:01 P.M.” that make for some distinct connections to Groundhog Day even if the lawsuit didn’t hold up. For example, on the first day in the story, Myron thinks it’s a good thing that “the resumptions”—a great label I almost feel like stealing for future use in this blog, but I can’t decide if that would be right—came on a day with nice weather instead of “in the middle of a midwinter cold snap with the streets full of dirty slush.”

And a couple notable details: