would you be at all interested in seeing the inside of the van?

I think I said before that there’s only one scene Phil doesn’t (necessarily) experience directly in Groundhog Day. I realized recently that isn’t true. I think because of its place in the film, because by then I am (and you are) so invested in Phil’s journey that I didn’t notice this particular bit doesn’t involve him. I’m talking about the scene just before the banquet, a scene that involves Larry and Nancy mostly and then a little Rita.

(That other scene Phil doesn’t necessarily experience would be the scene in the morgue, in case you forgot.)

The scene isn’t long, just a few lines of dialogue—and that wedding portrait on the wall that was previously framed between Rita and Phil now framed between Nancy and Larry, but let’s not get into that… yet.

We hear Larry talking as the camera pans along the bar, faces we don’t know from earlier in the film (and this detail might be important). “People just don’t understand what is involved in this,” he’s saying. “This is an art form.” He’s explaining to a clearly disinterested Nancy how important his job is. Maybe he should just lie to her.

Larry continues: “You know, I think most people just think that I hold the camera and point it at stuff. There is a lot more to it than just that.” Then, he says the classic line—and the title of today’s blog entry—“Would you be at all interested in seeing the inside of the van?”

Larry is at once possibly more genuine than Phil used to be and horribly creepy and offputting… and you can’t help but like him anyway, at least a little bit. I mean, yeah, there’s a little antagonism between Larry and Phil, but it’s mostly playful. It’s not like we think Larry’s going to get violent when he says, “Nobody honks this horn but me, pal” as they’re getting trapped by the blizzard. I can understand why one might not care for Chris Elliott as an actor, or Larry as a character, much. But—and maybe it’s matter of altered perspective, starting the second month of this blog today—I can’t help but see Larry as what he is, one more human trying to get by. Nancy’s single, she’s attractive. Why wouldn’t he try hooking up with her there at the bar?

It’s just too bad his approach is so bad.

Then again, if he weren’t bought by one of the Old Ladies at the bachelor auction a short time later, he might have had a shot with Nancy. She’s proven herself willing to not only have sex with (presumably—we don’t, of course, see how far she and Phil go, but I think it’s a safe assumption) but get engaged to a guy she’s never met just because she thinks he might have gone to high school with her.

(And, this after he “whatever”ed her name.)

It’s easy to imagine Nancy as being desperate enough to get together with Larry, even if she is so standoffish. Maybe she was out there at Gobbler’s Knob in her tight pink pants not because she really never misses the groundhog festival but because she’s hoping to meet a guy out there in the crowd. Phil might not even have had to put as much effort in as he did.

Larry and Nancy are just two lonely people trying desperately (Larry more than Nancy, I’d say) to find a connection with someone. At this point Phil’s changed the way we look at people connecting; he’s manipulated circumstance to perfect and then mangle his relationship with Rita. He’s manipulated his way into a night with Nancy. And, for a while there, everything he did was so shallow that seeing him save lives and help people—not to mention deal with mortality in a way he hasn’t had to deal with it in a very long time—is not only a tonal difference in the film but a potentially jarring difference in our experience of it. So, seeing Larry and Nancy fumbling at getting together (or avoiding it) is both a welcome intrusion—a little normalcy for a change—and, now that I’ve noticed that is has got nothing to do with Phil, a meaningful little moment. Phil’s journey has been unusual. Sure, it works as a metaphor for normal life in its ways, but it’s certainly not normal. Here, in this brief exchange between Larry and Nancy we witness something that doesn’t fit the film. On one level, it’s just a chance to see familiar characters one more time and lead up to the revelation of Phil on stage at the party. But, on another level, it echoes the original scene in the bar way back on Day 1, Larry in his “foxy” sweater, Phil casually suggesting he’s going to go read Hustler. Before, the trio (with requisite shot of the bartender shaking his head of course) was Phil at the bar, Rita and Larry approaching to maybe get him to go to the party. Now, it’s Larry and Nancy at the bar, Rita doing the approaching.

I think the simple replacement here works on a few levels. First, it demonstrates how Phil has become separated from what was commonplace. He ran off on his errands, and he has not only had nothing to do with Larry and Rita all day, he’s now not even grouped with them, socially or visually. Also, it isolates Rita as the extraneous one which is, arguably, what she was in the van at the beginning of the movie. Not to harp on it, but despite the argumentation of Claire Bacha (or so many people who accept this film as a romantic comedy and nothing else), I think this isolation demonstrates the notion that Rita is no longer the driving force behind Phil’s actions (even if she might, in some way, still be the object of his affections). And, finally, it pulls the audience back from the action a little as well; it’s setting us up for the conclusion to this little tale by separating us from Phil. This last one means that, structurally, this scene is potentially vital to the ongoing Phil storyline (or, rather, out experience of it) without an overt connection to it.

Internally, this scene revisits the wedding imagery, as well. 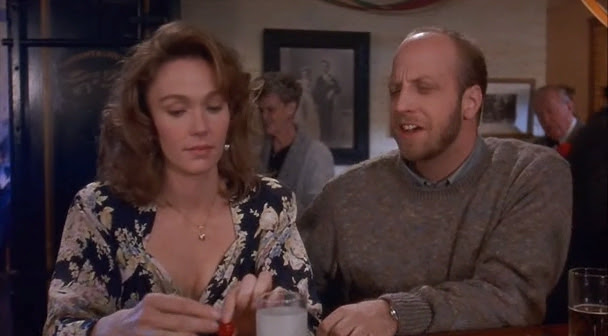 That wedding portrait on the wall at the bar is framed between Larry and Nancy now. Outside the plot of the film, outside the story of Phil Connors, this scene then plays as a sort of beginning to a new story, that of Larry and Nancy. Now, I don’t think these two characters are going to get together, especially after Larry spends the night with that Old Lady and then heads back to Pittsburgh. But, you could see this scene, like the “sweet vermouth” scene as the start of the process for a new relationship. This is how reality plays. Little steps, conversations that might not work quite right. We can’t always know just what to say. Larry, like us and unlike Phil, does not have the benefit of a repeating day to fix his approach; he’s just got his own desperation and a seeming inability to quite see his own faults… in reality, those two can get you pretty far, I suppose. In Punxsutawney, PA, February 2nd, 1993, Day 33, Nancy knows who Phil Connors is—probably saw his big speech that morning—and she wants to buy a Phil Connors who didn’t sit next to her in Mrs. Walsh’s 12th grade English class. So, Larry’s got his work cut out for him, and he’s probably just going to have to find a bar in Pittsburgh on February 3rd so he can try again with another Nancy. He’ll still be a smartass, he’ll still be just a cameraman. But, we can hope. 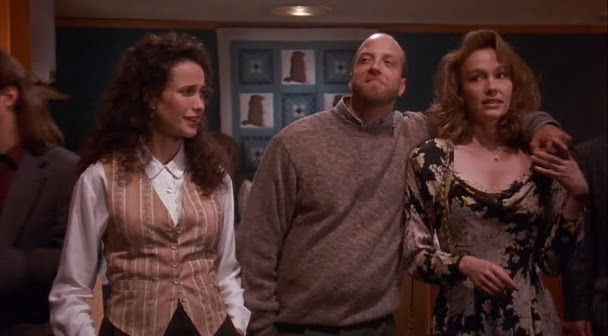 The usual experience of the film is that Phil’s “reward” for making himself a better man is that he gets to be with Rita. It makes for a nice fairy tale. While I am contrarian a bit regarding that take on the story, I think the need for human companionship is universal. Phil’s problem was that he hadn’t been looking for companionship. He’d been looking for one-night stands. But, yeah, he’s grown up by the end of the story. Now, Larry just has to figure out how to follow suit, and he has to do it in real time, day in, day out. If he can get past his insecurities, maybe he’s got a shot.

I’d like to believe so, anyway. It’s a nice thought, that any of us can find companionship, in a friend, in a lover, however it may come.

Today’s reason to repeat a day forever: (keeping it simple) to find companionship again, to not only the company but the confidence of another human being and have them enjoy mine as well.