The trailer for Groundhog Day, as my daughter said after seeing it, is cheesy. See for yourself.

I don’t mind the cheesiness, or how much more the trailer feels like the early 90s (not the 80s) than the film itself does. Things I do mind:

1. That alarm buzzer. Considering “I Got You Babe” was in the script from the beginning, it’s a little weird they go for the buzzer. I get that they need the buzzer for how they use it, as a reset noise for new days within the trailer, but, well, I just don’t like it.

2. Giving away the punchline on the déjà vu exchange with Mrs. Lancaster… but I guess you’ve got to give away some jokes.

3. The “Why?” at 1:16. Phil does not ask “Why” when Rita ughs at him eating the cake. But, they edit it so he’s responding to Rita saying, “Don’t you worry about cholesterol?” So, they change the line. I don’t like that.

4. That “Ned!” before Phil punches Ryerson at 1:22. I’m not sure why they dubbed a different “Ned” than is in the film. Or maybe the one in the film is the dubbed one, in which case I am glad they dubbed over the higher pitched one in the trailer.

5. At 1:36 the extra I call “black camera man” gets in the trailer. I don’t like him because he so obviously positions himself to remain in the shot, framed between Rita and Larry more than once, even looks directly at the camera one time. But, at least the annoying dancing couple (I labeled them before) didn’t get in the trailer.

6. Putting Rita on the screen along with the voiceover “what his heart wants most.” No wonder everyone interprets it so specifically as Phil winning over Rita being the thing that ends the time loop. They were told as much in the damn trailer.

7. That scream at 2:20 as the truck goes over the cliff. It’s a cheesy scream that doesn’t match Murray’s voice. Plus, combined with using his gleeful “Yes!” wake up afterward, it not only avoids the suicide but it implies the truck thing was not intentional and something as depressing as death will have nothing to do with this film. I understand that’s a way to get the audience in and they’ll invest their time because of the comedy and stay for the depression. But… maybe it’s just that looking at the trailer out of context—advertising a film I haven’t seen yet—bugs me because stuff doesn’t fit right.

8. The bouncy titles at the end. Reminds me of Home Alone and I’m not even sure it even resembles those titles. It’s weird to think about but Groundhog Day came out February 12th, so it’s trailer might’ve been playing in front of nice family friendly films like Home Alone (which came out November 16, 1990), so that’s why this trailer is so cheesy. That’s the audience this was supposed to appeal to.

9. The sound effects in general, the buzz when he electrocutes himself, the loudness of the slaps… I already mentioned the buzzer.

I do like that cut at 2:15, straight from Phil’s “I’d like to say a prayer and drink to world peace” to the truck smashing through the fence. I also like the use of Phil’s piano solo throughout.

Oddly enough, I think putting together a trailer for this film must have been pretty easy; play up the different versions of the same events just enough to intrigue but not enough to spoil, rinse and repeat.

Today’s reason to repeat a day forever: to produce a trailer from Groundhog Day footage that plays as an epic adventure film, a straight romantic comedy (sans time loop), a science fiction film, a horror film (which those other trailers above almost get), and whatever other genre comes to mind. 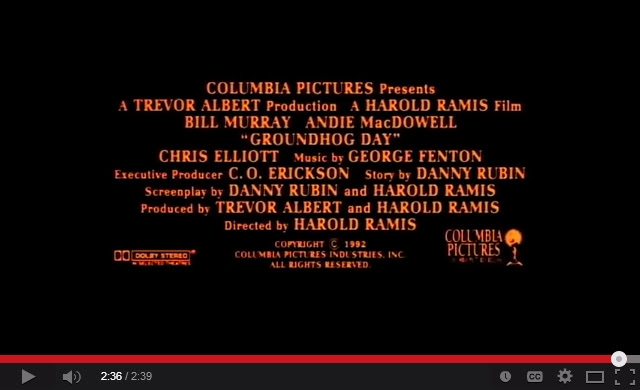