nothing bad can happen

I don't think I even like(d) today's movie, and I am only watching it because it's free on Netflix. I barely remember the beats of the story, but I feel like we must have watched it a lot because one scene in particular I know I saw a lot when I was young. And, I don't mean like certain "adult" scenes might've gotten extra watches from me when no one else was home. I mean, we just must have watched The Money Pit many times.

Even though we had a much better Tom Hanks movie--Splash at hand.

So, the movie starts and already I'm like what am I watching. Some old guy marrying the princess from Gymkata and I guess he's Hanks' father or something. Confirmed on the cut to new scene. Hanks and Long voiceover as we focus on mail. This movie is weird.

I know they're going to... Buy? Inherit? A house that turns out to be crap. And, I think Shelley Long is going to have an affair with the blonde dancer-looking dude from Die Hard, and I think she might be a musician. But, really, all I clearly recall from this film is Tom Hanks stuck in a hole in the floor playing with, I think, cash.

Ugh, more voiceover as camera tracks over to Hanks and Long in bed.

Oh, she doesn't want to commit to marriage. Wow, how progressive. (Imagine a semi-sarcastic tone right there, of course.)

They've been staying at the penthouse of Maestro Karl from Die Hard, and they're broke. This setup is weird.

Stop with the voiceover from just off screen. It's weird. Who made this movie? And, what is wrong with this Richard Benjamin guy? He's made at least one movie I likes---The Pentagon Wars, and several others that I know I've seen but have mostly forgotten--Mermaids, My Stepmother Is an Alien, Little Nikita, Made in America, Milk Money. I think he thinks he's being clever with juxtaposition. Make us focus on visuals while a bunch of exposition happens. Shove brief scenes that don't connect with each other right up next to each other, because I guess he's rushing to the titular house. On with the show, and all that.

Oh, Karl is her ex-husband. That's awkward. And, that was a young Wendell Pierce as a paramedic. This is fun. It's like a twisted time capsule that I packed myself but then I got amnesia and now I'm opening it. And, now there are more characters playing table tennis, and a bunch of men dressed as women, and I have very little idea what is happening. Or why.

They're a band called Cheap Girls, and they want to change their name to Meryl Streep. Is this satire? And, if so, of what?

Woman who owns the titular house needs money because of bloodsucking lawyers. There is some deeper something going on in this script. The guy who wrote it--David Giler--had written some TV and a couple movies before this, would go on to get story credit on Aliens and writing credit on Alien3. He was a producer on every Alien movie.

And, Myra Breckinridge, which I don't know what that is, but I know the name, and I think it's one of those things I should know. (Looked it up quickly and it sees to be about gender reassignment surgery. Not what I would have guessed.)

Hanks convincing the child singer he... Represents? Does taxes for? By saying he won't like him anymore if he doesn't lend him $200,000 was amusing, but I get stuck on what the movie is trying to say about these people, and did I care back in '86 when I saw this the first time? And, why do we cut to another voiceover over visuals scene?

And, then a montage of things going wrong at the house. Took 20 minutes to get the house, and it's falling apart in just three. This movie is kinda dumb.

They dragged Joe Mantegna into this, too? Wait, was he anybody yet? Do I care that his lech of a carpenter immediately comes on to Long's character? Do I care that I'm not sure what he character's name is after half an hour?

I've been on a tear lately of watching bad movies. Old budget, the-filmmakers-didn't-know-what-they-were-doing kind of stuff. I post random thoughts about them on Facebook to, I hope, amuse people later when they see the comments out of context. I feel like I'm doing that right now. Like this is just obvious crap and all my reactions are just non sequiturs. I mean, whose even seen this movie? 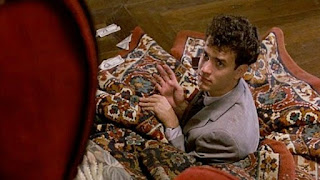 As I do from time to time, I check Roger Ebert's review, and he complains about the monotony of the gags, of course. But then, Roger calls my favorite one (and the only one I remembered) "the most irritating". Come on, Roger. I know you're dead, but why you gotta hate on the one moment that lets the gag linger. I think that's the problem with a lot of these. They're so brief that by the time we even are laughing or lamenting that we are not laughing, we're off to a new gag.

Now the bathtub's falling through the floor and shattering.

Now--actually, they're talking about money and these two are actually kinda adorable when, you know, nothing is happening.

But, now a bunch of Mad Max rejects have arrived to work on the place, and I'm not sure if this is offensive. And, if so, to who?

But, now the work crew has left after just doing a bunch of damage because they need to get paid, or something. I was barely paying attention as the Curly was explaining something. You'd think when the movie bothered to slow down for a moment, I'd be drawn to it, but I'm kinda bored.

Hanks, Walter just offered someone a cash bribe--when it was made pretty clear through a few scenes in a row they've got no money--and now he's in the hole in the floor. And Roger needs to come back to life, go back in time, and change the part of his review where he called this the most irritating gag. Three things he can't and presumably wouldn't do if he could.

Rube Goldberg might like the big climactic gag... That ends act two? I guess it's the just the complications moment.

This movie has an instrumental version of The Beatles' "Yesterday" because, I guess money was no object.

And Long, whose character name I'm still not sure of, got drunk and spent the night with her ex. Because all the scaffolding collapsing and Walter almost dying wasn't a low enough moment for this very shallow film.

And then there's a funny scene--that feels like a different movie, a different style of comedy--in which Walter asks Long about what happened the night before.

And, oh shit, this exchange was great:

Anna: "Sometimes it amazes me you ever passed the bar."
Walter: "I'm sure it does. You've never passed a bar in your life"
Anna: "You are so much less attractive when I'm sober."
Walter: "Thank goodness it's not that often."

Except she wasn't so drunk that she actually had sex with Max. She just thinks she did. And the house is all better in the end, so of course their relationship will be, too.

Walter: "You slept with Max, and I don't care."
Anna: "What?"
Walter: "I don't care. Well, I care, but not enough for us to be apart."
Anna: "Really?"
Walter: "Really. I'm glad you slept with him, because now I know how much I really love you. You sleeping with Max was the best thing that could have happened to us."
Anna: "I didnt' sleep with him."
Walter: "Thank God."

Then there's a silly wedding, and for some reason we circle back to Walter's father and his Gymkata wife, and they're buying a house from the same old lady who sold the house to Walter and Anna and I guess we're supposed to laugh. But, I don't know these people, and I don't care.