this is my room

Open on a poster for Zombie, drift down over more horror posters, and we know something about Morgan before we even see him. He has a specific area of interest and he overlaps his fucking posters, which most of the time, I'd say, is wrong, but there was a time in my early 20s, still in a small bedroom in my parents' house, that I had to overlap things on my wall in order to put up everything I wanted up.

My room was very small. Not sure if I've shared images before. Well, let me backtrack. As a kid, I had a race car bed that was in the dining room of all places, not because we were particularly poor but because there were a lot of us. I had six older sisters. The oldest two got married in the early 80s and then I got a very small room to myself upstairs. Barely long enough for a twin bed and only a couple feet wider. Third and fourth sister moved out and the remaining two each got larger rooms while I kept the small one. When they both left for college--the same year, I think--I finally got a bigger room. I had a rather large desk I bought at a yard sale for $60, my bed, a drawing table, and I set up a small alcove in one corner with bookshelves and a bean bag chair. And, like any teenager, I spent a lot of time up there. I didn't have my own VCR(s) or cable box until we moved into a new, smaller house when I was just out of high school. Then in a room a bit bigger smaller than the last, and a bit bigger than the one before that, I was old enough to have regular jobs, spend regular money, fill up shelves and binders with magazine and comic books, fill up shelves with books, then add more books that didn't fit on the shelves, and summer 1994 on, I was also recording a hell of a lot of tv and movies on far too many VHS tapes and those took up their own shelves.

Here's a glimpse of that room, the east wall and the west wall: 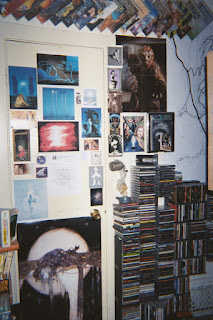 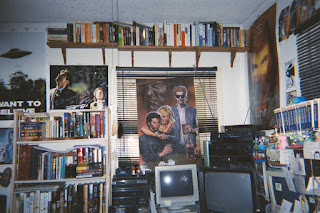 I could show you the even messier portions, but I don't want... Okay, fine, one more--the southwest corner. 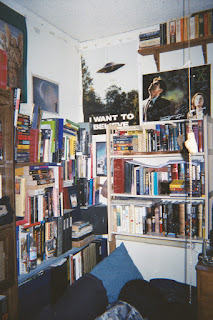 This room, I spent a lot of time in. I had at one point two different cable boxes and three VCRs, I had my stereo, a whole lot of CDs (more than you can see in that one photo above), I had my word processor and I had my computer. Mid 20s, I even had my own phone line.

By the time I was in high school--not long after Morgan Stewart's Coming Home was a fixture on our family videos, but a few years after the film was in theaters--I had my own taste in films, my own taste in books, magazines, whatever. I would still sit for a movie with the family, because I would watch most any movie at least once. For a few years, the best movies I'd see were at my sisters' houses because they would rent movies our mother wouldn't. Though conservative--and this was where I was going with all this--my mother was the one who introduced me to horror films, who showed my 80s comedies that included nudity and sex, showed me action movies that involved plenty of violence and bloodshed. But, honestly, that was still the conservative version of things. We avoided some horror films, some more-adult comedies, some sexually explicit dramas, and in my teens, I sought those things. I'd mostly given up on religion already, but only in retrospect. It wasn't until my first year in college right out of high school that I openly realized/acknowledged that I was an atheist, and then, while I never discussed as much with my parents, I never lied about it and never did anything to imply I still believed any of the stuff they'd been trying to get stuck in my head my whole life. And, as far as my taste in movies, all bets were off. I would watch anything. And, along with the younger two of my sisters, back home from college, we would rent plenty of movies, from crap to classics.

And, over the years, our mother got more conservative, more offended by sex or profanity in films. Me--I didn't care. I sought violence. I sought sex. I sought the profane and profound equally. I'd been watching the oscars since I was a kid but started really obsessing about them soon after I was out of high school. Then, I sought indie films as well as genre films, popular films as well as obscure low-budget stuff. Any everything in between. I went to USC out of high school, hoping to get into their film program, but after two years there, I dropped out because as I have mentioned before in this blog, I wasn't good at planning for the future, and certainly wasn't good with contingency plans when what plans I did have failed.

My room filled with more videos, more books, more magazines, more comics. I started writing regularly. Had I had internet access in my room (instead of on my sister's computer, which was in the dining room) I probably would have kept to my room all the time. Except when I was walking or taking the free bus across town to see a movie in the theater, or hit a book store.

And, I said very little about the film today. It happens.

If you've been following this blog for a long time, you know that, of course.

Since you stuck around this long: 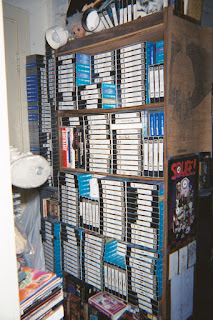 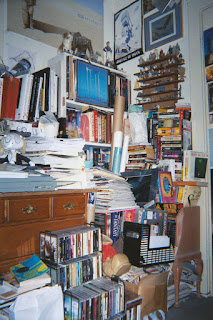 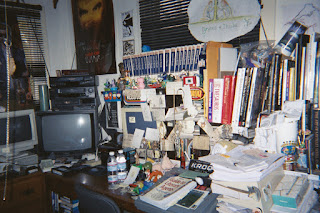