that wasn’t the first time you felt that sensation, was it?

The thing is, while I looked up Gregory Widen (the screenwriter) I couldn't find anything connecting him to gay themes or whatnot. Couldn't find much about his life at all. But, Russell Mulcahy (the director)--yeah, he's gay.

"No one has ever known we were among you... Until now."

Then there's the soundtrack songs by Queen.

We open on professional wrestlers, men in tight clothes jumping on each other.

CUT TO men in furs tackling each other in the past. And, then MacLeod has to run off to a secret meeting in the parking lot.

MacLeod, by the way--Lambert was cast before the director even knew he was only just learning English. Basically, he was cast for his look.

It isn't just because it's an 80s action movie that it leans into a homoerotic male gaze. That's kinda the nature of film. If a shot is going to linger, of course it will do so lovingly a great deal of the time. How else do you stare at anything but with strong emotion. And, the film doesn't want us to hate these characters. Even--most of the time--the Kurgan. 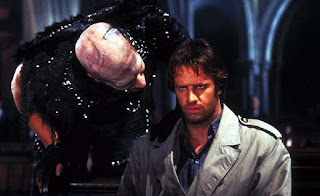 Clearly the quickening after one guy loses his head is an orgasm. And, I will remind you that there are no female immortals in the film.

That one woman--I missed her name--really wants a piece of Connor before the battle where he dies. But, you know, changed as he is by being stabbed by the Kurgan, she's first to suggest he's got the devil in him now.

I've written about 80s homoeroticism before, of course. A writer (unnamed) at DGO magazine, 22 June 2017, puts it like this:

It's funny the examples of masculinity young males get in popular culture. For me growing up in the '80s, that was always muscles and dominance, either through guns and violence or through the admiration and clinginess of women.

Other instances of homoeroticism were pervasive throughout the '80s: Hair bands where hyper-sexualized rock Stars donned makeup and apparent pirate costumes; greased-up professional wrestlers grappled in their laced-up knee-highs and undies. Aspects of gay subculture had unwittingly made their way to mainstream America.

The thing all these had in common was that they were marketed directly to straight, adolescent boys. While some homophobe or hetero-normative parents may have worried of raising sissies by letting their boys play with Cabbage Patch Kids and My Little Pony, they unwittingly left their kids a lone with muscle-bound action figures and a greased-up Arnold Schwarzenegger and thought nothing of it.


"Are you a faggot, Nash," the uniform cop asks MacLeod.

"Why, Garfield," MacLeod asks. "You cruising for a piece of ass?"

"I'll tell you, what happened Russell," the cop, Garfield, replies, "You went down to the garage for a blow job. You just didn't want to pay for it."

MacLeod scoffs. "Huh. You are sick."

And, Garfield punches him.

But, back to DGO:

There's no way to know how much this homoeroticism was on the minds of the filmmakers--my guess is that it was nowhere near. I like the idea of all of it going over the head of a little straight boy like myself. I also like the idea that the muscles, dominance, and sexual power may have landed on a gay boy differently. But I really like the delicious irony of a movie like "Commando" luring in the most hyper-masculine, macho, shoot-me-up-loving dude and giving him a little tingle that he's not sure what to do with.

A tingle not unlike the way these immortals can sense one another. They've got their magic, immortal gaydar so they know when another immortal is nearby, because, they've got to get with as many immortals as they can until there are none left over. MacLeod sees the Kurgan across the battlefield and he's hit like a thunderbolt. In the post-coital bliss of being with Heather, MacLeod can still feel another thunderbolt when Ramirez arrives.

(In case that embed doesn't work, here's the thunderbolt reference.)

Although it may be hard to imagine a masculine equivalent to Dietrich in a Sternberg film, I want to argue here that, since Nearl wrote his analysis in the early 80s, a tradition of depicting the male body in an erotically charged or openly fetishistic fashion--

As I'm typing up this quote, MacLeod dunks his head in a barrel of water and flips his hair back, though he says Heather likes him dirty. CUT TO Heather and MacLeod post-coital and there's Ramirez. Wearing peacock feathers, no less, because he's a flamboyant immortal. And, then there's lightning. But, back to Schuckmann:

--has indeed been established--in cinema as well as in a wider cultural context. In attempting to trace its "conventions," I take the American action cinema of the 80s and 90s as my primary example. This genre continues and expands the tradition of the historical epic of the 50s and early 60s, as it offers images of the muscular male body on display in a spectacular cinematic context, characterized by violent action-laden plots and visual excess. Moreover, the genre arguable is address primarily to male spectators--rather obviously in its marketing and promotion strategies that aim at a young, male audience and, implicitly, in the cinematic structure, which clearly privileges identification with the male point of view. MY observation is that an abundance of images of eroticism masculinity in films with an explicitly constructed male point of view results in a homoeroticism that is present as a troubling but usually repressed undercurrent in the films' images and narratives.

Ramirez to MacLeod: "You must learn to conceal your special gift, and harness you power until the time of the gathering." Then, they go for a run on the beach. Ramirez in his finery on a white horse. MacLeod, of course in his skirt (kilt).

...a common plot device is the construction of a bad guy as the hero's negative double. Throughout the film, the hero and the bad guy are obsessively searching, chasing, and fighting each other. Their relation is mostly characterized by an ambivalent fascination for each other, a mixture of hate and admiration/ Their conflict usually culminates in a final man-to-man confrontation, in the course of which the bad guy is killed. Their obsessive fixation upon each other could be interpreted as being motivated by unconscious homosexual desires. Complimentary to these films is usually a marginal female character who confirms the men's heterosexuality and serves as a token object of exchange.

"Let yourself feel the stag." MacLeod should ask him if that line ever works.
MacLeod's nickname for Ramirez is haggis, which is basically like he called him sausage. It's a little on the nose.

Ramirez warns MacLeod away from women and let's him handle his sword.

Next scene, talking about gaydar.

Then Ramirez is hanging out having a drink with Heather and one of his exes (the Kurgan) just has to show up and ruin it. Later, the Kurgan will be quick to inform MacLeod that not only did he take Ramirez's head, but because he's definitely not gay, he also raped (what he thinks was) Ramirez's woman.

Really he had an intense little one-on-one with Ramirez, he penetrated the Egyptian, they had a little chat about how Ramirez was keeping a young woman on the side, Ramirez spit on him (because I guess he'd been watching Brokeback Mountain recently), and then the Kurgan took his head.

Kastagir to MacLeod: "Big strong man like you shouldn't be afraid of a little boom-boom."

In the duel flashback, Hotchkiss and Bassett definitely have a homosexual relationship going on, and I think Basset might not be entirely okay with it being on public display.

Instead of this rundown hotel, the Kurgan really should've been staying at the local Y.

Matunas, the guy with the uzi (and who we learn later has more guns at home) who I assume is out hunting the "head hunter" that's been in the news--he finds the Kurgan and Kastagir fighting in an alley near a sex shop, he calls himself a marine (and apparently was one, but what matters is he has to buck himself up by saying it out loud), and has a shirt with a target on Moscow. Classic case of overcompensating for his heterosexual shortcomings. But, then the Kurgan stabs him and blows a load of all the nearby windows all over him and everything nearby.

And, I haven't even mentioned the Kurgan's S&M getup.