what’s the matter, you prejudiced or something?

I remember the sound mix for this film being amazing. All the music, all the explosions. I remember how exciting this, and a few months later Top Gun were. But, watching it today is harder because our ability to film aerial tricks and dogfights has improved and been augmented by special effects magic.

Not that, I'm sure, this movie didn't employ some visual effects. On IMDb, Iron Eagle has 1 credit for visual effects, and 12 for special effects. A lot of the aerial shots seem fairly genuine (though the film very much did not get cooperation from the Air Force once they learned of what goes on in act two), so I'm guessing a lot of the visual effects are really the overlays to put the HUD targeting stuff over the footage, making really footage look like a simulator, blue screen backgrounds*, simple stuff like that. Or, you know, explosions, of course. I mean, it's the 80s. In America. Spare no expense making your movie big and loud...

(* speaking of blue screen, during the snake run early in the film, Larry B. Scott as Reggie absolutely cannot stop cheating toward camera in all his closeups. He's supposed to be talking on the radio and flying the plane, but he just keeps himself angled to the right because he's gotta look good for the camera.)

Which brings me back to the sound mix. I don't know what's up with the HD copy I got through Amazon Prime, but it feels like every time the songs kick in, the mix puts them under everything else. I remember the songs being these overwhelming things in the theater. There were explosions and fast planes and loud songs and it was glorious and I loved it. A few months later, Top Gun did it again. Two years later, Iron Eagle II threw the Russians and the Americans together but added a hot Russian pilot as the love interest for the lead and I was just the right age for that to be a wonderful addition.

Meanwhile, this one is actually rather subtle in its propaganda relative to, say, Rocky IV. Doug's father was shot down flying near... Well, it ain't Russia, or some obvious Middle Eastern enemy. Rather, it's a vaguely North African country that looks a lot like Tunisia on a map but the script goes out of its way to never actually say its name. But, they're definitely Muslims--the guy in the minaret singing "Allahu Akbar" must've chilled a few "patriotic" Americans--and according to Doug, their country is a shithole.

But, we've got a bright young man who only got an F on his report card because he missed an exam while stealing time on the flight simulator because he knows what he wants to be. Can't fault him for that, of course. He just wants to do something. It's 1985 and producer Ron Samuels has an anonymous Texas investor who, as quoted by Vadim Rizov on AV Club, 15 March 2018, "'doesn't want pornographic stuff or things that are off-color, or violence for violence's sake. He wants things that make a statement, that you can feel good about, that a family can go watch.' As he told The Film Journal, Samuels was all for jingoism: 'It's Americana, it's patriotic, it's positive, it's saying let's go out there and do something.'" Rizov questions what that "something" might be, but having lived through 80s action movies, I think it's rather obvious. Kill the Commie, kill the Muslim, kill just about anyone with darker skin than us, and we are surely all white, and Christian, right? Good wholesome Americans like we were when we won Dubya Dubya Two.

I mentioned yesterday how you could read into Chappy being a black man as a positive thing, and an important thematic detail; he's willing to go along with Doug's plans because he has seen injustice and, as he puts it, "something about maniacs messing with good men that always pissed me off." But, there are a couple counterpoints: 1) the real life military hero he takes his nickname from, General Daniel "Chappie" James, might have been the first black four-star General in US history, but he also decried the lawlessness of the civil rights movement; 2) it is Doug's black friend Reggie (of the footnote above regarding his inability to not face the camera) who is the most rah rah patriotic of their group of friends; he calls President Carter "Mr. Peanut" in regards to how Iran was different from the current situation in unnamed country, and then offers: "Now we got a President who don't take shit from gimpy countries. Why do you think they call him Ronnie Ray Gun?" Of course, then he plays a childish prank on Doug involving a fake boutonnière that squirts water. He's a junior form of Chappy, and Chappy is really just the acceptable form of black man in a white-centric film. He goes along, does what the audience wants done, serves the white kid's story through and through, and he even dances, and drags the white lead to a black bar.

I was working on a paragraph there involving Gossett's role in Enemy Mine the year before, the on-the-nose-race relations of that film, but I remember really liking that movie all those years ago, and judging by an interview in Smashing Interviews magazine, 8 March 2018, Gossett seems fairly proud of that film and his role in it.

Plus, like I said in this blog once, I was raised white. I was also raised Christian. I was raised American. Before I knew what it meant, I supported Ronald Reagan, and I cheered at all the right places in movies like this one--good Americans blowing up nameless foreigners and nevermind the consequences. Even here. Milo steals classified documents. Joenie and Tally steal... Well, I'm not sure what they steal, but it's probably classified as well. Tony and Reggie commit some mayhem, or maybe even terrorism, if they catch the MPs in a bad mood. And, someone hacks computers (probably Milo) and falsifies something or other to get planes and weapons approved. But, do we leave the theater assuming any one of them will be punished? Of course not. None of them is going to be banned from the base. None of them is going to take a beating later at home. None of them is going to be shipped off to... I was going to say military school, but that seems antithetical here. Doug gets rewarded. And, even the Magic Negro seems to get away scott free, and his plane didn't even get returned.

And, if you're offended that I just called Chappy a Magic Negro, let us review Nnedi Okorafor-Mbachu's standards for being a "Magical Negro":

Regarding 1, I've already covered that. White father captured, white friends sneaking around being awesome, and then there's the old black man who both pushes it along and does none of the legwork. That we see, anyway. He seems to do a lot of the planning, but we can only infer as much next to scene after scene of Doug's friends being proactive.

Regarding 2, Doug and Chappy meet for the first time because this retired pilot who enjoys fixing planes has heard Doug will be flying the snake (more on that in a moment) and just volunteers his services to help out. When Doug comes by with all his stolen intelligence, Chappy is just hanging out and, I think, eating a sandwich. He literally has nothing better to do, and it turns out was already making his own plans; we just didn't get to see any of that.

Regarding 3, Chappy not only dies in the middle of helping Doug on his mission, he gets to also come back and deus ex machina the ending, I'm sure, to the cheers of preview audiences everywhere.

Regarding 4, Chappy has been in the military for years, is now in the reserves, so maybe he's managed some formal education in there. He certainly knows his planes and weaponry. But, as I already pointed out, he is retired military but still just hangs out near the base and works on planes because, well, maybe he never learned to do anything else.

Regarding 5, my impulse was to say no. But, Chappy is like the voice of God in Doug's ear, comforting him posthumously because, even dead, he's gotta serve 2. And, he also has this speech on his tape he leaves behind:

Right now, you're probably filled with all the doubts in the world. But, I'm gonna tell you something: God doesn't give people things he doesn't want 'me to use. And he gave you... the touch. It's a power you have inside of you, down there where you keep your guts, boy. It's all you need to blast your way in and get back what they took from you. Your dad's just sitting there waiting for a miracle. If you fly your heart out, you can give him one. It's up to you.

Not only does Chappy keep doing his Magical Negro job after he's done, his superpower is to engage with and promote this white boy's fighter-jet-flying, kill-the-mad-foreigner superpower. 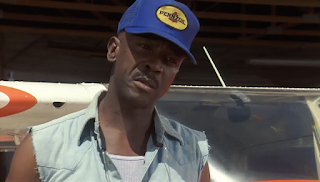 Back to Okorafor-Mbachu, regarding the problem:

And, a bigger problem--I was perfectly fine with this when I was about to turn 10, and all of us who saw this movie and loved it were fine with this, because that was the way America worked, the way the world worked.

Works. Present tense. My mind just went to the MCU. Black War Machine as support for white Iron Man, Hispanic Luis as support for Ant-Man, Chinese Wong to Doctor Strange, black Heimdall to Thor, and so on. Sure, Black Panther got his own film, but that nearly a decade in. We have not fixed this problem.
Posted by robert e g black at 9:07 PM