It's time to cheat a little. Today I'm watching Highlander which was not really a fixture in my life until my teens, though I did see it in the theater when I had just turned 10 and I loved it.

There are numerous movies, surely, that I've skipped because they weren't fixtures. Influence doesn't have to come from repetition. Trying to figure out what some of those movies might be, though, I noticed the first few I thought of were films I had already covered in some context other than this deconstruction of my childhood experience with film.

Regarding Highlander, though. Saw the sequel in '91, was amused but did not like it--if you aren't familiar with the Highlander franchise, the second film not only contradicts the post-original reality but also retcons the backstory into a thing that doesn't make sense. And, it shoves it into a near-future dystopia for no particular reason. Third one in '94 was unnecessary but held up far better than the second. And, by then the television spinoff was a few seasons in and I would watch that thing--paired up with Forever Knight late every Saturday night. I would get a little obsessive--

(I know, right? That doesn't sound like me at all.)

--about the series in the 90s. This was before the Internet birthed handy wikis and I basically compiled my own note on the various immortals and Duncan MacLeod's history. I read a few of the novels, watched every episode of the animated spinoff with a third MacLeod, and wrote a few scripts for the show, fantasizing about submitting them, then fantasizing that just because the show had a policy about only taking spec scripts from Canadian or French citizens (it was a Canadian/French co-production) was the only reason my scripts would not be accepted. Really, they just probably weren't that good. I wrote some X-Files scripts around that time, too. If the Internet had been then the thing it is today, I would have a mean fanfic game and been famous in a a few pockets of some fandoms.

(Toward the end of the tv series, and with the Raven spinoff, and a handful of followup films, the franchise got a little ridiculous and bizarre.)

But, in 1986, this thing is a fascinating exercise in what fantasy film can be. The juxtaposition of time periods. The sword and sorcery in a modern urban setting. And, as I recently discovered on my Cock & Bull Minute podcast, the melancholy of this film would have been big with me as well. In high school choraliers, we had to write a paper about a song, and I chose Queen's "Who Wants To Live Forever" from this soundtrack.

(I mentioned the soundtrack to Iron Eagle, but I don't know if I specifically referenced the lyrics to Queen's "One Vision" - the lyrics that can be interpreted as hopeful and a little bleeding-heart liberal, or really fascist, depending on your own background. That was just the one song they did for that movie. For this one, they did an entire album--A Kind of Magic.)

This isn't a movie that I watched time and time again, but it was a movie that got into my head and got stuck there.

And then I get distracted watching the movie because it's been years since I watched it last. I used to own it on VHS of course, but I don't own a copy anymore.

The titular Highlander and the Kurgan both are so deliberately obtuse and enigmatic. I love it. Brenda comes at this all from a strange direction (and because it's the 80s, falls inexplicably and immediately in love; to be fair, Christopher Lambert was pretty hot in '86) and early on at least is more of a protagonist than MacLeod is. Sure he killed a guy and got arrested, but this movie is playing like a detective story. He is more of a strange femme fatale... Homme fatale, I guess. And, that's makes me think of this movie in new terms, far from whatever I might have thought of it at the time it was on the big screen. It's a New York-based film noir except people don't pull guns on one another, they pull swords.

Instead of these weird immortals from far away lands, picture them as made men in different mob organizations and the film plays mostly the same.

Also, I loved--and still love--MacLeod's home. The huge open space, the sunken sections with couches built in around. Wood floors and big windows.

A good loft for a homme fatale.

But then, use when I was going to start expanding on this story as film noir, we get our first extended flashback, MacLeod and Heather and Ramirez. But, this is just backstory. MacLeod's time in the old country before he made it to New York and became a made man.

The voice-over penetrates into the past of a central male character as well as into this character's psyche in order to arrive at a fundamental truth that is seen as causing an individually and/or socially abnormal or destructive situation.

Highlander begins with text and voiceover narration, but not from MacLeod. Instead, Ramirez, and he's been dead since 1642. But, what this movie has instead of voiceover from our, um, male protagonist, is flashbacks. Including one I've never seen before, b it read about. When Connor finds Rachel as a child during World War II. This wasn't on my VHS copy. But is on the Amazon Prime digital copy.

MacLeod comes to Brenda's place like a proper homme fatale. He's there to manipulate and seduce. We have seen from the flashbacks (so far) his "abnormal or destructive situation". He has to kill people or be killed.

This confessional/investigative arrangement is also typically tied to a vaguely psychoanalytic situation, a Freudian "talking cure" of sorts in which the confessing narrator is somehow relieved of guilt or anxiety by arriving at a sense of truth through confession to patriarchal authority figures within the film text or to the film audience itself who seem to be asked to grant a kind of absolution and to act as a curative force.

That doesn't quite all fit, but Ramirez warns MacLeod to leave Heather. He will just keep living while she grows old and dies. But, MacLeod loves her and stays with her, and now in the present he's found this other woman who fascinates him. Maybe he needs absolution from staying with Heather and ensuring that she would never have children. He certainly could use some absolution from cutting off people's heads, but he can hardly help that one. It's self defense. And, it's a biological mutation he cannot control.

But then, so is being a man.

Interestingly, what the confession male narrators of these films search for in their past experiences or psychological condition is a revelation that involves the truth not so much about masculinity but rather about femininity.

Keep in mind, of course, that I am already taking Brenda and MacLeod as interchangeable in terms of roles. If he is the homme fatale, she is our protagonist--at least in the present--and he is, well, feminine.

Like Freud, these films seem to be concerned with ascertaining "what the woman wants," finding the essential nature of female difference which often is symbolized in female sexuality--as it is also for Freud. Femininity thus becomes the ultimate subject of the film's discourse.

But, keeping in mind that the men here--and the immortals in the film are all men--go around swinging phallic symbols at one another.

Michel Foucault argues in The History of Sexuality that Western society has attempted to control sex by putting it into a discourse which connected it with a search for truth. According to Foucault, this search for the truth of sexuality while seeming to reveal sexual truth, really acts only to mask, deny access to, and assert power over it. The confession is merely one procedure that has been developed for telling a "truth" about sex, which, in fact, masked the very nature of sex itself.

A bunch of men who are not like other men, drawn together to parking lots, public parks, and back alleys to meet up in secret, penetrate one another, and then run off to their next encounter. And, these encounters in this present situation, America in the mid 80s, end in death. It may not be deliberate, but one could quite easily read into Highlander, and the "gathering" as the homosexual male's experience with AIDS. Something I wouldn't have thought of at all when I was 10. The metaphor, I mean.

And, judging by a quick Google search, only one other person has made the connection--someone going by the name jumpyurbones on Reddit just a few years ago.

In the meantime, Brenda thinks MacLeod is afraid to live. And this after they had. Sex, so maybe she knows he's really into other men with swords. 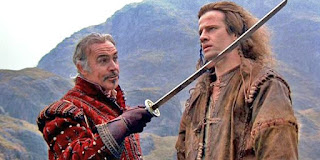