- May 14, 2020
Stand By Me still hits, emotionally. Even right off, the score is not particularly powerful, certainly not famous, but I recognize it immediately, and I know who Christopher Chambers is in that newspaper headline.

I didn't know that first time I saw this movie what that headline was about. And, I also didn't realize that Castle Rock shouldn't be in Oregon, but I guess when they were adapting the novella, the only other marker of geography was Portland and Portland, Oregon was more well known than Portland, Maine. I didn't know Castle Rock at all. (Though it is part of The Dead Zone, which had already had a film version, I wouldn't see any of that movie until one night in a bed and breakfast in Dublin, Ireland in 1987. I wouldn't get to reading stories like "Mrs. Todd's Shortcut", "The Sun Dog", "It Grows on You", Cujo, The Dark Half, or Needful Things until at least a year or two later. That last one I would read on our senior trip to Maui in '93.

And, I meant to just talk about the movie itself today. But, I can't help but reminisce and let tangents take charge. 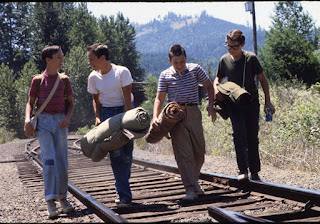 I never went on an adventure like these four boys do. Never lied about spending the night camping in some friend's back field. Did sneak around a bit, in a nice private school Christian sort of way. After school, when I should have been hanging around the field by the pick up zone (and across the street from where my mother worked in the Mail Processing Department of the church that ran the school

(Worldwide Church of God for those keeping score at home)

where I would also work when I was commuting to classes at USC out of high school), I was instead running off to El Rancho with Sean or Neiel

(And Neiel might actually be reading this, since we're friends on Facebook and I know he reads at least occasionally as he commented on a post a couple weeks ago. Hello Neiel. Thanks for reading. My daughter told me about a week after the fact that she ran into you while canvassing for Bernie, but I was feeling awkward that week and didn't say anything on Facebook because, well, that's me. Awkward and introverted one minute, hosting podcasts and volunteering even on short notice for guest spots on other ones because I want to offer my opinions on movies anytime, anyplace. Things other than movies, too. Politics, for example. Follow me on Twitter @robertegblack if you want my take on politics--think bleeding-heart liberal who often argues with conservatives and calls the current president "asshole". Used to be, Facebook was where I'd go for political debate. But, that got tired. Facebook is for movie talk these days. The Movies by Minutes group, and the friends I've made through there.

My Facebook is divided between podcast friends, VHive friends, and comm studies friends, with a few random other folks (D&D friends, relatives, people like Neiel who I went to grade school with). And, it's generally friendly. Twitter is for antagonism. And promotion. Each of my podcasts, and this blog, have their own Twitter account. A few of them have their own Instagram. My Instagram for my podcast Dave Made a Minute is one I am particularly proud of. I got to go full self-help, inspirational-speaker mode every weekend there when that podcast was going. I might go that sort of route again next year, or whenever it is Annihilation Minute ends and I run the sister shows Eternal Sunshine of the Spotless Minute and Minutiae Ex Machina.

I don't know. Back when this blog was only a few posts in, my sister said I had a self-help book in me. I toyed with turning this blog into a book just a few years ago. But, I think the book form needs leaner writing than maybe I am capable of anymore. At least in straight prose form. My scripts for Annihilation Minute can be pretty lean sometimes. The edits, not so much. Like the episode that went up just this evening--the final episode is only about 15 minutes long, but it took about 5 hours from writing to recording to editing and most of that was the editing, because I layered in some music and some extra audio stuff from Tarkovsky and little bits and pieces that just made it take longer, get denser, but not particularly longer.

And now, I'm rambling still in this parenthetical because I'm not sure I know how to get back out. The subject drifted and drifted and drifted, and the thing is, really, all of these things tie together in my head in strange ways that it feels entirely appropriate to be talking about Stand By Me by instead sharing stories about grade school, stories about my 20s, stories about writing, about writing, about watching and podcasting about movies up to the present. Because, it all blends in my mind. One movie affects the next, and each movie affects the things I read, the things I write, the things I say.

I could tell you about us sneaking over to the dirt hill behind the high school building--except it wasn't yet the high school building was it? It was some other church campus department I think--climbing up the fence to the telephone pole to the roof and jumping into the dirt because why the fuck not? We were kids and you do shit like that. You climb trees onto school rooftops and run around, knowing full well that if you get caught, you're going to get into trouble from a school official, your parents, or both. And, I never wanted to get caught doing anything. When I was young, they kicked one of my sisters out of the house. To be fair, she was doing a lot of bad things, and our parents grew up in an age when you didn't get your kid therapy or rehab or medication or anything, but just sent them packing and everyone acted like that was perfectly fine. But, in addition to being told the end of the world was nigh, I also lived my adolescence under the shadow of the idea that if I was caught doing something bad, I might be out on my own. Not that it would matter, I guess, when World War III arrived and everything went to shit anyway.

I still did bad things of course. I was just really careful about all of it.

And, I think the paranthetical has circled back to...)

...sneaking off to El Rancho for candy and soda. Which went just fine except for the one time I forgot my mother was picking me up earlier than usual and I was hanging out at the wood shop next to the school--where Neiel's dad worked--instead of being outside where I might see her car.

Never adventured off to a dead body... Well, there was a dead cat behind the high school building one time.

And I pause for Chris and Gordie talking by the tree. Which is still one of my favorite movie scenes ever. And one of the saddest.

I recall a Peter Straub line about Stephen King, which I think I learned via King himself, after his early novels had centered on younger characters; Straub said King had not yet discovered sex. My own stories were similar. Main characters often younger than I was. And, I wrote about sex before I ever actually had it myself. I was, I think--and a psychiatrist backed me up on this--emotionally and psychologically stunted by my childhood. What else was I going to write about but people who also still needed to figure out how to grow up.

I've also got a theory these days that maybe no one ever really figures out how to grow up. Some people just get better at playing the part we expect mature older folks to be.

Growing up in the end times, with movies to present me with more life than I expected to live--that didn't help.

And, maybe, just maybe, I will actually write about Stand By Me content tomorrow. We'll see.