it’s a kind of magic

- May 08, 2020
I wasn't sure if I wanted to watch and write about Highlander another time. I felt I had little to say that wouldn't take me past some breaking point where I might have to obsess, you know, build a blog or a movies-by-minutes podcast around it, dig into each and every detail. 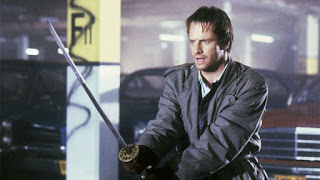 I wanted to write more about White Nights the other day, but a) I got to that movie on the 1st of the month and on the 2nd I return to Groundhog Day, 2) it would be awkward (at least in my head) to write about White Nights, step away from it, and then come right back to it after a day away, and d) what I wanted to say about it had to do with the present; I mean, White Nights is okay, but it ain't a great film, but there was something about the dancing, especially some of the stuff Baryshnikov was doing in that cold open, serious strength moves that I was a little envious of because I'm sitting here by my couch, overweight, drinking an adult beverage and lamenting that I can't do that shit, but that says nothing of what the movie meant to me as a child.

Nor have the last two days with Highlander said much about what this movie meant to me as a kid. I started to get into it--the combination of the urban landscape and the fantasy elements of sword and sorcery that probably opened up my imagination a bit--and then I got sidetracked by my 2020 vision looking back at obvious (now) shit like homoeroticism and gay subtext. While it matters that so many action movies that I saw in the 80s--and I saw a lot--were filled with that stuff and meanwhile I was going to church and attending private school where homosexuality was verboten, at a certain point, this deconstruction of my childhood becomes something slightly different than intended.

INSERT Seinfeld saying, "not that there's anything wrong with that."

I got into my "movie life" list because I wanted to deconstruct--and reconstruct--what all these movies were putting into me back then. The subtext, the subconscious stuff--it's important, but what about text?

I mean, I already hinted at why this film mattered to me. I'd seen fantasy films. Seen science fiction films. Seen fantasy films masquerading as science fiction films, and vice versa. And, I loved all of it. Add in horror, and "genre" films were my bread and butter, even when I was young. Stepping past the bounds of everyday life was why cinema was invented, as far as I was concerned. The galaxy far far away in Star Wars, filled with all its alien races, its magic, its sword fights, its spaceships. Weird fantasy stuff like Beastmaster or Dragonslayer. Cheap sci-fi like Ice Pirates or Flash Gordon. Dystopias and post-apocalyptic landscapes like in Escape from New York or Mad Max. Overwrought space opera like Dune. Even satire I didn't quite understand but still enjoyed, like The Incredible Shrinking Woman.

I think I drifted toward horror more than anything--and that was surely influenced by my sisters' interests and my mother's rental choices--which I surely tried to influence time and time again when we'd go to The Wherehouse or Music Plus or, later, Blockbuster. But, I would watch anything and everything. I've said many times now in this blog that I grew up in a religious environment that wasn't very supportive. The world was ending. The Cold War was going to ignite and the world was going to burn in a conflagration the likes of which no one had ever seen. And, if I just believed enough, I'd get to go to the "place of safety" and everything would be hunky dory, nevermind all the people dying, but I guess I wasn't supposed to care about them because they had their chance to find the one true church and follow its teachings, and they deserved everything they got. But, how do you live with that as a kid? Got plans for when you grow up? Nah, that's silly. Maybe you've got dreams about being a novelist or a filmmaker, but what inclination is there to figure out the steps it takes to get there? Why not just wallow in the present and damn the future, because it wasn't any more real than the movies you saw on the big or small screen, and there, in those movies, the ones that already exist, you could step out of the world you know and let your mind expand like you're on a fucking drug trip, And, you don't know why the prostitute being named Candy has an extra level of meaning and you only know the tiniest bit of what the Kurgan might do to her, but who cares about the scene; he just put a sword together out of pieces in a fancy briefcase, and the movie opened with an extended sword fight and this is all glorious and crazy and everything you ever wanted from a movie. You've seen Indiana Jones best Nazis, Luke Skywalker best Darth Vader, Max Rockatansky best The Humungus (well, sort of) and get left in the wasteland with nothing much but a wrecked tanker truck and a shotgun with no shells left, and that still feels like something better to fantasize about that's your real future because that might include a lake of fire, and if you don't like Max getting left behind, you just watch the movie over again and he gets his awesome chase sequence and what does it matter that you sometimes have dreams about nuclear missiles so plentiful in the sky that you can try to count them as they approach?

I grew up on westerns, then actions movies from the 80s, so it was easy to find one hero or another that I might want to be. And, playing at being someone other than myself was... Well, it made life palatable.

And, this movie in particular offers up a great fantasy setup, but also has some great cinematic tricks, playing with time and some wonderful transitions. And sure, your mother commented later about the demons flying around after Connor beheads the Kurgan, but so fucking what, right? Movies are like dreams, and on the off chance you get to grow up, how great would it be to make some of these dreams?

By '86, I'm already writing stories. I rarely finish them, but that's because I rush into getting them started without knowing what I'm doing. I don't actually complete a novel-length story until just before I turn 21. The writing is overdone and mostly crap but, to this day, I kinda want to rewrite it because the basic premise and the central characters still hold up.

Nearly all my stores are fantastical in some way. And some of them are even pretty good.

Highlander took so many disparate elements and tied them together into something utterly fascinating. The sequel would add aliens to the mix, and do so badly, but the third film and the tv series would make up for that. And, except for a few episodes--unfortunately, several in its final season--I would love it.