still be there when you and i are gone

- May 19, 2020
It feels like, however much I had things to say regarding the last film on the list (Stand By Me 1381 1382 1383 1383 1385 1386), with each further movie on my "movie life" list, it is much more about commenting from the present than remembering from the past, because for some of them--like today's Crocodile Dundee, for example--they were so briefly what I've been calling fixtures, that their influence is negligible beside something bigger and more attractive to my imagination like Dune or Masters of the Universe or Willow...

Actually, Willow might be on the list. But, I'm not sure, say, Batman is, even though I saw that movie 6 times on the big screen, bought the VHS on the day it came out, listened to both soundtracks constantly, and went retro watching reruns of every episode of the 60s tv show and the '66 film, and when I started reading comics regularly a few years later, the Batman comics were on my pull list for more than a decade. But, it's harder to define these fixtures a certain number of years out from my birth. We recorded movies off cable, and we bought the occasional VHS (but they could be expensive sometimes), but we also rented a lot of them. And, movies like Scream for Help or Humongous or A Nightmare on Elm Street


(I'm not sure I ever told the story of that first experience with Elm Street in this blog... Confirmed, at least in the two entries specifically regarding the film: 435 760, I did not recount that story. I probably told it on a podcast. Maybe Michael Myers Minute. Simple version: the movie was too much for my mother or she thought it was too much for me, so she made my father drive us out--we were at a drive-in--after just the first act. I sat backward on the backseat watching the movie in silence as we drove away. Didn't see the movie through to the end until it was on television. And a handful of years later, I bought every movie in the franchise on VHS for myself.)

or Slaughter High, Return to Horror High, House, The Gate, Remo Williams, Red Dawn, Spies Like Us, D.A.R.R.Y.L., Cloak and Dagger, movies I saw once or twice but we just never owned them. Even The Day After which I think I've only seen the one time. But, it certainly made an impact. I'm guess there are odd little movies we rented in the 80s over in Hastings Ranch (and there were definitely some we rented at Now Playing in the 90s that had an impact on what I thought of movies, what I wanted to do with movies, or with writing, and I don't even remember their titles. 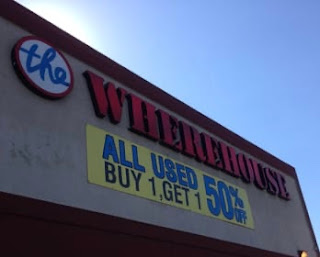 One movie is all movies, and all that. All in all, they're all just bricks in the wall. Or something. We'd head out to the second-run theater and see a double feature more than once a week sometimes. Catch a new release on the weekend somewhere else that same week. There was a time I had the phone numbers of every movie theater within easy driving distance memorized...

For the youths in the audience, this was before smartphones. For the not-quite-youths, this was well before Moviefone. You wanted to know what was on a a particular theater, you had to check the newspaper listing or know the phone number to call for the prerecorded list of showtimes.

Had the benefit of growing up in Pasadena, suburban Los Angeles as it were. Not as suburban as the tract homes and gated communities and whatnot, but suburban enough. But, we had a bunch of movie theaters available. Pacific (one big screen in the 80s, turned into 6 smaller ones later) and Mann (3 screens) in Hastings Ranch. The Colorado, the Esquire, the United Artists theater and somewhere in the mid-80s the Academy along Colorado. Then, the United Artists Marketplace (6 screens) opened in the late 80s, and the AMC One Colorado (a multiplex we just called the "underground" because it was, well, underground) right at the front end of the 90s. Add the Mann 6 our in Monrovia, the two Edwards theaters down in Alhambra, and we had most any theater release available. Once I could drive myself to a theater farther away, and all the way into the present (well, before quarantine closed theaters) there are upwards of a hundred screens around, maybe two hundred. Including all the Laemmle theater and independents where Oscar-hopeful films do their required big-screen time in December. I've been seeing movies alone in the theater since as soon as I didn't need to beg someone else to take me.

Going with other people was still fun, is still fun. But, during the movie is for time for watching the movie so it hardly matters. Plus, I always want to see more movies than everyone else I know.

The thing about movies on and off my list is they left a mark. They all leave a mark. The cynical take is that each one fills up a piece of something that has been missing inside me since I was a kid afraid of the end of the world. The more hopeful take is that whatever damage my childhood did to me, I chose--and I choose--to rebuild or build upon what's there with all these stories because that makes me a far bigger person than I would be otherwise. Roger's empathy machine and all that. I used to end my YouTube reviews by saying you should see more movies. You still should. It'll make you better people.
1980s childhood crocodile dundee deconstruction ebert empathy film films groundhog day project movie movies self vhs video