what do you do?

And then, there's Gordie.


(and I was surprised to learn that Richard Dreyfuss would have only been about 3 years older than Gordie would have been. Of course, in the book, Chris doesn't die in the mid-80s. He dies in 1973. When he and Gordie would only be 25-26 years old. The film does specify on the prop newspaper that Chris died September 4, 1985.)

and sitting in silence, contemplating. We see the headline and know he's thinking about death, maybe a friend, maybe a family member. We don't know who Chris Chambers is. We don't yet know who Gordie Lachance is.

CUT TO the past and it has long struck me that narrator Gordie saying "I was living in a small town" instead of "I lived in a small town" like he was just passing through. But, he is just passing through this time and place like any of us are. What happens now, what happens here--is finite, specific. Before he even gets to that line, we get Gordie picking out what magazine to buy. Surely a key ingredient in the identity of a kid his age. When I was 12 going on 13, for example, I had a subscription to Starlog (and would soon add Fangoria) and had let my subscription to Ranger Rick lapse. In the next few years, I'd have subscriptions to TV Guide an Entertainment Weekly and then through my late teens and into my 20s, a bunch of other movie magazines as well.

Chris is the decision maker, the leader, but Gordie is the idea guy. He specifies that not only will they lie about tenting out in Vern's back field, but Vern will lie about staying over at Teddy's and they will all add that they are going to the drag races the next day to buy more time.

Meanwhile, at home, Gordie is "invisible". The book makes his family position even more tenuous. His mother had trouble having children. Miscarried three times before she carried Dennis to term (well, eight months; he came early). Ten years later, she got pregnant with Gordie. When Gordie was born, his father was 51, his mother 43. He says he was born "the child of two Geritol-chuggers". And Gordie was a surprise they weren't ready for, and never cared enough for.

Gordie is a storyteller, of course. The storyteller. He'll also end up an English teacher just like his author did. Hence, he latches onto Vern saying, "This is really a good time." In narration, Gordie says,


Vern didn't just mean being off limits inside the junkyard, or fudging on our folks, or going on a hike up the tracks to Harlow. He meant those things, but it seems to me now it was more and that we all knew it. Everything was there and around us. We knew exactly who we were and exactly where we were going. It was grand.

In the very next scene Quidaciolu talks to him about his brother and questions him about what he does, explicitly, and who he is, implicitly. And Gordie gets lost in a flashback about his brother, About his parents. About himself.

And then he learns the "vast difference between myth and reality" with Chopper, and the movie focuses on Teddy for a moment until Gordie anchors them all in the moment. "I'm sorry if I'm spoiling everybody's good time," Teddy says. "I'm not sure it should be a good time," Gordie replies. "You want to go back?" "No," Gordie says, "But going to see a dead kid, maybe it shouldn't be a party."

We cut away to Ace and his gang, and when we come back for "Lollipop," we get Gordie asking about who he is. "Do you think I'm weird," he asks Chris. And, we learn that Gordie will be taking college classes soon. Gordie calls the smart guys he'll meet in high school "pussies" and Chris disputes his choice of labels. Drift over to the Mighty Mouse vs Superman discussion and back to serious talk:


"You could be a serious writer someday."

"Fuck writing. I don't want to be a writer. It's stupid. It's a stupid waste of time."

"Bulltrue. I know how your dad feels about you. He doesn't care about you. Denny was the one he cared about, and don't try to tell me different. You're just a kid, Gordie."

"I wish to hell I was your dad. You wouldn't be talking about taking these stupid shop courses If I was. It's like God gave you something, man, all those stories you can make up, and he said, 'This is what we got for you. Try not to lose it.' Kids lose everything unless there's something there to look out for them. If your parents are too fucked-up to do it, then maybe I should."

This movie came out fall of '86 (limited release in August, wide release in November). I had just started the 6th grade. I'd been writing (or at least starting) stories since at least 4th (plus playing complex scenarios with action figures or with my sisters or friends years before). I don't remember, but I imagine I could appreciate some of this. Having stories in my head and how great was it to think that I could make a living getting these stories out?

That contradicted the whole idea that the world wasn't going to last much longer, but hope is hope, right?

I'd keep writing. A lot of it amateur-hour stuff, but there came a point where I definitely got better at it. And, even some of the worst writing had ideas worth keeping. Through my 20s I was a writer. Unpublished. But still writing. 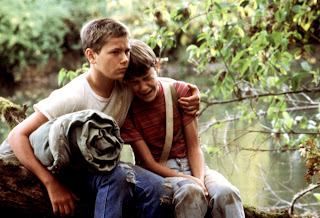 But, back to the movie. Movie Gordie was closer to his brother than book Gordie. He not only still thinks about Dennis but still misses him. In the book, the conversation above about being a writer blends right into the conversation that is shifted to nighttime by the campfire in the film, and it makes for a stronger emotional core, I think. Chris' emotional breakdown becomes a part of Gordie's own struggle, oddly by tearing their conversation in two.

And, other parts get shrunk down. Like the deer. In the movie, Gordie sits reading Gang Busters and the deer arrives. They make eye contact, it lasts a beat, and then the deer leaves. CUT TO the freight train waking the other boys. Narrator Gordie says, "it was on the tip of my tongue to tell them about the deer, but I didn't. That was the one thing I kept to myself. I've never spoken or written of it until just now." The book, being prose, makes more of this.


And I have to tell you that it seems a lesser thing written down, damn near inconsequential. But for me it was the best part of that trip, the cleanest part, and it was a moment I found myself returning to almost helplessly, when there was trouble in my life--my first day in the bush in Vietnam, and this fellow walked into the clearing where we were with his hand over his nose and when he took his hand away there was no nose there because it had been shot off; the time the doctor told us our youngest son might be hydrocephalus (he turned out just to have an oversized head, thank God); the long crazy weeks before my mother died. I would find my thoughts turning back to that morning, the scuffed suede of her ears, the white flash of her tail. But eight hundred million Red Chinese don't give a shit, right? The most important things are the hardest to say because words diminish them. It's hard to make strangers care about the good things in your life.

It is often easier to talk about the bad things. Dreaming about World War III versus wanting to be a novelist or a filmmaker. There's something more visceral in the former, something too personal maybe in the latter.

And, sometimes I avoid talking about the worst, anyway. I could spend many words talking about how the childhood of at least three of these main actors (I don't recall hearing anything at all about Jerry O'Connell's childhood, good or bad) was fucked up. Like, speaking of Gordie, when he cries and repeats the line about his father hating him, Wheaton might have been channeling some of the reality of the abuse he suffered from his father.

A deer beside the train tracks. Just starting her day. A boy awake before his friends, reading alone. I've been the first two wake many times camping. It's peaceful. It's quiet. The chaos of the larger world has no power in that silence. It's a lovely thing.
Posted by robert e g black at 6:14 PM