if your friends drag you down

I was going to move on from Stand By Me after yesterday but as I was posting the blog entry and the film was ending, a detail caught my attention. And, having looked again at the book, it stood out. 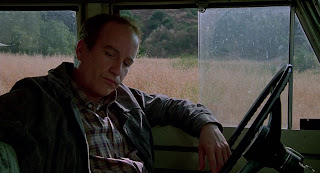 At the end of the film, narrator Gordie explains:


As time went on we saw less and less of Teddy and Vern, until eventually they became just two more faces in the halls. It happens sometimes. Friends come in and out of your life like busboys in a restaurant. I heard that Vern got married out of high school, had four kids and is now the forklift operator at the Arsenault Lumber Yard.

In the book, Vern "was killed in a house fire that swept a Lewiston apartment building in 1966... Someone fell asleep in one of the bedrooms with a live cigarette going. Vern himself, maybe, drifting off, dreaming of his pennies. They identified him and the four others who dies by their teeth." The story of The Body takes place in 1960. So, Vern died when he was only about 18. He married no one. He had no kids. He operated no forklift.


Teddy tried to get into the Army, but his eyes and his ear kept him out. Last I'd heard he'd spent some time in jail and was now doing odd jobs around Castle Rock.

Book Teddy died in a car crash in 1971, "or maybe it was early 1972." The Air Force had turned him down and he was "classified 4F by the draft." He had some problems at school, but managed to graduate. He drove his old Chevrolet Bel Air full of a new circle of friends--"passing around a couple of joints and a couple of bottles of Popov"--into a utility pole and "the Chevrolet rolled six times. One girl came out technically still alive." Six months later, they pulled the plug on her respirator.


Chris did get out [of Castle Rock]. He enrolled in the college courses with me. And although it was hard, he gutted it out like he always did.

Book Chris had trouble with the college courses. He had to play catchup after not being that great a student before. One example: "Before he could even begin to understand introductory algebra, he had to re-learn the fractions that he and Teddy and Vern had played pocket-pool through in the fifth grade." And, Gordie explains: "Neither of us made top honors, but I came out seventh and Chris stood nineteenth. We ere both accepted at the ?University of Maine, but I went to the Orono Campus while Chris enrolled at the Portland campus. Pre-law, can you believe that?"

And, then we get that passage I quoted the other day:
”We both dated through high school, but no girl ever came between us. Does that sound like we went faggot? It would have to most of our old friends, Vern and Teddy included. But it was only survival. We were clinging to each other in deep water. I've explained about Chris, I think; my reasons for clinging to him were less definable. His desire to get away from Castle rock and out of the mill's shadow seemed to me to be my best part, and I could not just leave him to sink or swim on his own. If he had drowned that part of me would have drowned with him, I think."

And, I should explain Gordie's drowning dream.

The movie puts Gordie's struggle very specifically in terms of his grief over his brother, but that is just one piece of it in the book. The dream he has the night they camp in the woods is not about Denny's funeral but about swimming at White's Beach--"a gravel-pit in Brunswick that had been turned into a miniature lake when the gravel-diggers struck water." He and Chris are swimming. Chris starts to go under. "Looking into the clear water I could see two bloated, naked corpses holding his ankles. One was Vern and the other was Teddy, and their open eyes were as blank and pupil less as the eyes of Greek statutes... But instead of diving down and trying to save him, I stroked madly for the shore, or at least to a place where the eater could not be over my head." A hand grabs Gordie's calf--Teddy's--and Gordie wakes up.

When book narrator Gordie says that line, "Friends come in and out of your life like busboys in a restaurant," he adds, "did you ever notice that? But when I think of that dream, the corpses under the water pulling implacably at my legs, it seems right that it should be that way. Some people drown, that's all. It's not fair, but it happens. Some people drown."

Through high school, Gordie clung to Chris, and vice versa, because there was no one else. They had already drifted away from Teddy and Vern and the other wet ends that were in their gang (but get no mention in the film). And then they go off to separate campuses, and it's almost to the point of the film's narration...


He went on to college and eventually became a lawyer. Last week, he entered a fast-food restaurant. Just ahead of him, two men got into an argument. One of them pulled a knife. Chris, who'd always made the best peace, tried to break it up. He was stabbed in the throat. He died almost instantly. Although I hadn't seen him in more than ten years, I know I'll miss him forever.

The thing is, it hadn't been 10 years. Chris died near the end of 1971, about the same time Teddy did. And, it matters that book narrator Gordie isn't clear on the time of Teddy's death, for example. The movie paints these four like the best of friends, but they were just four of a larger group who stuck together to play cards, to smoke, to drink, and have a good time.

In a way, the film version is more powerful because it positions these four closer together, and especially puts Gordie and Chris up against each other. It paints a picture of adolescent boys who are more than stereotypical boys, especially set in a post-World War II world, with Korea mostly behind, Vietnam ahead. That these boys actually care about one another matters.

But then the movie ruins it with that line--"I hadn't seen him in more than ten years." The book doesn't make so much room for these last two--Gordie and Chris--to drift so far apart as to not even remember exactly when the other died. The film, for no particular reason, sets the framing segments with "the writer" specifically in 1985. And, this does leave a hole in the history. If it has been 25 years since they found Ray Brower, and nearly two decades since Gordie and Chris left town for college, it makes it even more tragic that Gordie has lost contact with all three of them. And especially Chris. Gordie is married for a year and a half already in the present of 1971 in the book and he is teaching high school English. His wife is pregnant. He is trying to write a book. And then he sees the headline, STUDENT FATALLY STABBED IN PORTLAND RESTAURANT. (Not the headline from the film, of course, because in 1985, Chris is long past being a student and he and Gordie have long ago went their separate ways, and I imagine that, sitting there at the side of the road, "the writer" is imagining this story more than remembering it in order to invoke and idea of the friends he once had.


I never had any friends later on like the ones I had when I was twelve. Jesus, does anyone?

It's a nice thought. Made weaker when you really think about the film's version of the timing, how long it has been since they were friends.

And, also--and this has a lot to do with me going to private school and not the public school a block from the house where I grew up--I never had friends when I was twelve like the ones Gordie imagined he had.

And, I could end with that cynical attempt at cleverness. But, the point is not the specific friends but the relationships in general you can form at that age, the way things are so simple, and everything is possible, but you don't even realize it until you're older and it's too late.

Wil Wheaton said in an interview with NPR,


Stand by Me, it sort of talks about this time in your life that feels incredibly complicated, but as you get older you realize it's actually incredibly simple. And we get the tremendous gift of not knowing that it's never going to be like that again for the rest of our lives, so it's just pure and it's uncomplicated. And it's a time that stays with us even as we become adults.