that's not my job

SpaceCamp is not streaming anywhere, and that is just my first complaint.

This movie has been (mostly) forgotten, and yet it was #6 its opening weekend, and was only—and I mean only--beat by Top Gun, Raw Deal, Cobra, Poltergeist II, and Short Circuit. Action movies, horror and sci fi, and this nice wholesome* film holds it own.

The release of the film was delayed, of course, by the Challenger explosion in January, so that didn’t help.

Andie suggests—sarcastically—that Kevin is “clean cut, well motivated, all American”, but he seems to be very much that. That Tate Donovan plays the “bad boy” of the film is really weird. He does steal someone else’s team tag soon after his arrival, so I guess he’s absolute evil.

The various characters are interesting—ambitious Kathryn, hyperintelligent Tish, troublemaker Kevin, the too young Max, and entrepreneur Rudy. Plus their instructor Andie who was NASA’s first female pilot but now is slumming it at Space Camp.

And, they’ve got their other sides, too. Kevin may be trouble but he is also first to come to Max’s defense. Tish may be smart but at a glance she seems like a shallow ditz. Rudy wants to make something of himself but isn’t good at science. Kathryn’s other side has to wait for the movie to happen.

Plus, there’s Jinx, the robot. Built for space but his chips have problems so he will never go. But, he and Max have become friends because while Max might be a kid (this was Joaquin nee Leaf Phoenix’ first film role) he has already attended the junior camp twice.

This montage with Andie doing voiceover without pause over multiple short scenes is distracting. I forgot what I wanted to say about the characters having some depth for what seems at first blush a shallow 80s movie. The focus, if there is one, is Kathryn, the one who really needs to figure herself out. She can already fly a plane, but she doesn’t want to be a pilot. And, she’s played by Lea Thompson. Red Dawn in ’84, Back to the Future in ’85, this and Howard the Duck in ’86, and Some Kind of Wonderful in ’87. All films I was familiar with, and now I see she had Casual Sex in ’88 and I don’t think I have ever seen that, but I probably would have wanted to at the time. Thompson was cute, and while she had a narrow character type, she was good at playing it.

When Kathryn says, “In space, anything is possible,” she’s naïve, of course, but Thompson sells the line. Kevin jumps in with some Cold War pessimism and Donovan sells that. Their romance is a possibly unnecessary diversion from the plot, but they play it well.

Thompson doesn’t sell as well the idea that Andie has been on her case since day one at Space Camp, especially because the film has not really shown Andie being on her case anymore than she has been on anyone else’s.

The film does put its pieces together rather neatly. Max helps Kevin and Andie sneak out. Jinx gets them in trouble. Kevin lashes out at Max. Max wishes he were in space. And Jinx makes that shit happen.

Roger complains the characters aren’t original and their dialogue is painfully predictable. But, it’s an 11-year-old kid and some teenagers—of course their dialogue is going to be trite. If it weren’t, that wouldn’t be very realistic.

The movie skips over a pivotal thing, though. While Jinx could have manipulated whatever process chose which kids got to sit in on the engine test, it might have been nicer if we saw this group of kids recover from their horrible simulator experience by learning to work together even before they go into space. But, we’re halfway into the film before the engine test happens because it has already been both taking too long getting on with things and wasting time showing us a little too much going on. We’ve seen a montage of them in different training scenarios but most of them didn’t last long enough for us to really understand what was going on or what the affect was on these characters. Kathryn has her trouble on the Multi Axis Trainer, but all we really learned was she would keep trying until she got it right. No shit. We knew she was that kind of person when she arrived in a plane instead of a car, when she talked to Tish about studying, when she announced she wanted to be the first female shuttle commander.

There are some nice moments in the film. Just after launch, for example, there’s a great shot of Max panicking a little, holding onto his helmet until he realizes that they’re going into space, and all the shaking around him doesn’t mean anything anymore. He’s going to space. Later, Rudy has a nice panic moment when he starts rambling about a guy he knew who could hold his breath “for hours” under water. Even later, there’s a moment I still remember even though that last time I probably watched this movie was a quarter century ago, where Kathryn accepts her fate as pilot.

There is also ridiculous, even beyond Jinx and his silliness. They need Max to squeeze into Daedalus because he’s small but he can’t go outside without a spacesuit which mostly equalizes anyone’s size except maybe height. 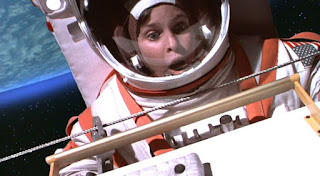 Meanwhile, they’ve got a 12-hour deadline because low oxygen but they’re acting like they couldn’t possibly land earlier. It only takes an hour and a half for the shuttle to orbit the Earth. The movie acts like it will be 12 hours just to circle once, and their sidetrip to Daedalus alters their orbit anyway. (And, their 26-minute trip to Daedalus seems to deplete their oxygen supply by close to 10 hours.)

Not that the film is aiming for realism, of course. But, then again, the earlier scenes at Space Camp were filmed at the actually Space Camp at the US Space and Rocket Center in Huntsville. The space sequence was filmed in the actual simulator used at Space Camp. So, they wanted something like realism.

All in all, SpaceCamp is just one more example of kids having to take charge and save the day, like so many other 80s movies. A nice enough message, sure. Or maybe cynical—like adults have doomed us all so what else can we do but have the kids fix it?

I mean, just the storage of those oxygen containers inside the Daedalus structure where they can’t be reached is sign enough that someone official fucked something up somewhere.
Posted by robert e g black at 7:08 PM