It feels wrong that I hope Soul Man is horribly offensive. I mean, the premise is offensive enough, but we recognized that even when the movie was new. We. Just looked right on past it because the movie justifies (or tries to justify) itself with a nice romance at the center--and the church I grew up in had until recently been very much against miscegenation--and, of course, deep down, it's a movie about a white guy put upon by the world who just wants to make good. And, that makes it all okay.

And, I imagine I will not be able to contain the smartass with this one. Sorry.

First, a surprise: Steve Miner directed this thing. He directed Friday the 13th Part II and Part III. He directed House. He'd go on to direct Warlock and Halloween H20, and Lake Placid, and we'd even see him directing a scene from Forever Young in person one night when we spotted some bright lights in... I think it was San Marino, but I don't recall the exact street. I was 16 and barely driving yet at that point; I don't quite recall if it was San Marino, South Pasadena, or farther south in Alhambra. But Mel Gibson on the porch of a random residential house filming a movie was awesome. He wasn't problematic just yet, or at least I didn't know that, or didn't know what that meant. Or, I was still not quite out from under the conservative umbrella I'd been raised beneath...

But, that's 1992. This is 1986, still. And a white guy who I was very familiar with from my sister Bobbie's bedroom wall was about to pretend to be black, hook up with that girl from Commando

and take classes from Darth Vader, just to be a successful American.

See, that's the thing; this is like the quintessential American film. White guy feels a little put upon, so he steals from black people. What's more American than that?

But, now I'm imagining a modern remake in which on his first day in Cambridge, Mark forgets he looks like a black man and gets gunned down and the movie is over and the audience is put out of its misery.

(Also, I must nitpick: if you're going to say your lead took pills to darken his skin, then maybe be sure that the neck of all his shirts don't wipe away some of his makeup.) 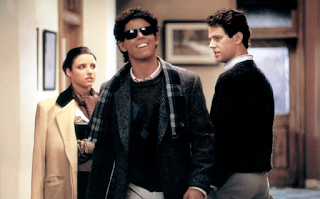 But nevermind the racism for a moment--neither Mark (C. Thomas Howell, the aforementioned, 130+ pictures of him on my sister's wall guy) nor Gordon (Arye Gross) feel like law students. Maybe it would play better if they were freshman in college and not transfers from UCLA.

But,, James Earl Jones just showed up and this feels like a real movie. At least for the moment.

And then Mark is condescending as fuck, offering to help Sarah (Rae Dawn Chong) with her homework, because of course, he's better at everything than she is, of course, because he was raised white.

Oh shit, the basketball captains fight over Mark because he's black, mix up his name with the other black guy, and just get his name wrong because Mark sounds too white, I guess. It's like this movie wants to be horribly offensive and be subversive satire at the same time.

And so, I look up the screenwriter--Carol Black. Good name


and in case you don't know my name, that's not a race reference but a surname reference)

but she wrote for Growing Pains before this, would go on to create and write for The Wonder Years and Ellen later. I'm not sure how much of an authority on race relations she is. And, the previously mentioned Steve Miner isn't bringing much to the table regarding as much. But, this is America. You want to a movie about black people... Or at least like 2-3 black people, of course you get a white writer and a white director and, I assume, white producers, because that's who is going to get a movie into theaters and play everything for laughs just enough that butts are in the seats and the movie will be #32 at the box office for the year. I mean, it is. But, that is the problem, right.

And the even bigger problem, in context of this white guy--me--and his blog, is that I register that the premise for this film is offensive but I'm not sure I care. Ten years old. White boy who already likes watching any movie you'll put in front of me.

And, this movie is trying to be something smart, satirical. When Mark goes to dinner with Whitney


(Melora Hardin as the girlfriend who barely registers, just like in Iron Eagle)

and her family, the visions they each have of him--the mother seeing him as some dark-skinned savage out to ravish her, the son imagining him as Prince, the father seeing him as a pimp who has impregnated his daughter--are sadly simplistic but feel like the writer aiming for something.

Not that I want to defend this movie, just yet.

As a teacher, for example, I don't like that Mark doesn't just fail to turn in his paper on time because he got arrested but because he had not written it yet. You're waiting 18 hours before the paper is due, that's you're fucking fault, white man; don't come running to your black professor looking for special treatment just because you're black now. Write that shit ahead of time, and get your life together.

And really this movie has a similar problem to Crocodile Dundee in that the characters are inconsistent. Sarah is the A student when the semester begins and Mark is the slacker get a C. But, throw in a child because of course the young black woman had to be a single mother in the mid-80s. Then, when she starts to have trouble, he's right there to study with her, because romantic comedy has to be romantic comedy.

In its best moments, this movie is a romantic comedy, and I'm not the biggest fan of romantic comedies, or at least I say I'm not. Mark taking a liking to Sarah's kid, Sarah's first snow. These moments work despite and separate from the race elements of the story.

But then race comes back in. Mark got the scholarship that Sarah should have gotten. But, he feels bad about that and it seems he's going to go turn himself in over it. But, when a rather sinister talk (which turns out to be unrelated) with Professor Banks (Jones) gets him rethinking his choice to come clean, we get a deus ex machina (without payoff) instead. Barely in the movie Lisa (Julie Louis-Dreyfus) and Brad (Mark Neely) happen to see a list of Brouchard Scholarship recipients and recognize Mark's name because his name is the only one on the plaque that includes a middle name as well--Pelfrey.

And then the white guy has to defend his actions based on the color of his skin and the privilege that he has been raised to be accustomed to.

It would be brilliant if it weren't so wrong.
Posted by robert e g black at 8:14 PM