In the 80s, I guess it was like any year I made it all the way through was awesome because The Day After and Threads had offered up some wonderful visuals for my overactive imagination and cult-induced apocalypticism. Better to be Phil, stuck in the same day again and again and again, knowing that world didn't fall apart that day, no big war began, no pandemic struck, no aliens invaded. Just small town problems, a natural death or two*, and that's all.

(* if you think only the Old Man died in Punxsutawney my friends, I suggest you watch this deleted scene and picture what that truck would have done to that little girl and that puppy if Phil hadn't been there.)

Quick sidenote: I'm watching on the blu-Ray and the subtitles not quite matching up with the dialogue (which I've still got locked in my head as well) is really bugging me, but someone's doing laundry, and I don't want to just blast the film to the entire neighborhood... Though maybe the neighborhood could use some Groundhog Day.

Also, Rita's still awful. Phil says, "I can't stay here" and she--his producer, mind you, and her first time doing it--doesn't immediately reassure him, let him know he's staying somewhere else. No, she instead asks "What's the matter, Phil?" What does it matter why he can't stay there if you already arranged for him to stay somewhere else? Do your job, Rita. Keep the talent happy.

However, noticing something new in the thing I've seen more than 400 times is also just me taking the messaging and running with it, I suppose; recognizing something that was there all along and I just missed it.

Not for lack of trying.

Meanwhile, I glance at the list for 1986 on my "movie life" list and it's gonna be a fun "year", however long it takes me to write about the eight movies I've got listed for '86. And, if world is still here for me to get to '87, that list might be even better (and longer, with 10 movies I haven't already written about in this blog). And, the list kinda ends in '88 (with five more films listed); I guess I thought my childhood ended when I was 12, or maybe when it came to fixture films, the ones we watched many a time, they had to be old enough that we had them on video, really, before we moved out of the house where I was born. See, the thing is, I had a tv in my room well before we moved


(I actually, had a tiny black and white tv sometime in the mid 80s, that I bought for myself at a yard sale. And, I used that to watch things like LA Law and The Tonight Show and Star Trek reruns, and GLOW (the original wrestling, not the also great Netflix series, obviously). I watched stuff my family didn't want to watch--things like Knight Rider, Highwayman, Star Trek the Next Generation, Macgyver--on a tv in the dining room, and at some point in those last few years at that house--when my sisters were all off married or at college or wherever--that tv migrated into my bedroom upstairs. And there I watched Carson and Letterman, Saturday Night Live, and things on far beyond my bedtime. I also had a computer just a few feet from that tv, so I would play games while "watching" tv, and the multi-screen experience began long before I ever had a smart phone or a tablet...)

but it wasn't until after we moved that I had a a VCR in my room or my own cable box, or that I was renting my own movies from Blockbuster or the independent rental place Now Playing that was just a couple blocks from our new, smaller place. And, it was somewhere around then, and when I was old enough to work and have my own money on a regular basis, that I bought my own copies of movies, that I recorded so many more off cable, that I started making lists of what movies I watched in a given year.

And, oh, how I wish I still had all those lists.

As Phil and Gus and Ralph leave the bowling alley, I find myself thinking not as far back as 1985 or 1993 but 2014, spending the weekend there in Woodstock for Groundhog Day and bowling there, taking the walking tour around town, taking so many pictures--I won't put all the links here, because there'd be too many; just navigate yourself back to the tail end of January and probably most of February, 2014, for posts written in and about Woodstock. Traveling like that for a blog--it's madness. But, I did it, because I guess I'm mad.

For Michael Myers Minute, I traveled to all the filming locations, but most of those were like 10-20 minutes away from where I live. Michael Myers Minute, for those of you who just follow this blog and don't know me elsewhere, is a podcast about (so far) the original Halloween. It is one of several movies-by-minutes podcasts I've done--

But, I must interrupt this update as to what's been happening since I stopped this blog two years ago to say--I GOT SOMETHING NEW! It ain't much, but that there was anything is awesome. Felix and Herman's belts don't match. Which means they aren't part of the uniform. Felix's belt is actually quite nice, with a little loopy pattern etched into the leather. Herman's is simpler, a couple lines parallel to the edges of the belt. 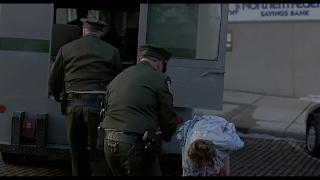 (Alas, I couldn't get an HD screencap. Had to pull that one off YouTube.)


It was after The Groundhog Day Project ceased for the second time that I guested on the Groundhog Minute podcast, and got sucked into the world of movies-by-minutes podcasts. I've had my own shows--the previously mentioned Michael Myers Minute, Dave Made a Minute, Mandy Sucks Minute--those three having finished going through a film one minute per episode--The Room Minute, Annihilation Minute, Cock & Bull Minute--those three still ongoing at the time of writing. And more planned.

And, now, as of just a few days ago, this blog is going again. Ostensibly, just through the 1st of August, finish out the year I never finished. It's an extra thing to think about through the summer. And, through quarantine.

Take my mind back to the 80s again, when everything was bright and cheery and I thought the world was about to end.