if we sleep together tonight, we’d only confuse things

Let us get the silly out of the way up front. The setup in Egypt is silly--


and the set builders did not to a great job (except for the fact that they, of course, did not want this set to be taken seriously) as there is some weird thing on the wall that looks more like a... Had to double check, but it's a harpy on the wall between Emmy and the next mummy. And, who wrapped Emmy up like that, anyway? And, what was the point of it? Was she just going to stay in the tomb forever? And, how is it so well lit? And, why do the cracks all look horribly fake? Why are the hieroglyphs scattered instead of spaced uniformly spaced?Why are there some weird repeating shapes even with the tops of the alcoves that look like a deformed pharoah's head with an erection, and why are they not evenly spaced? You had one fucking job, set decorator, art director, production designed, whoever the fuck messed this up. Nevermind the Staff of Aesculapius-looking decorations at the sides of the mummy alcoves, because that shit is Greek, not Egyptian, and I stand by my line yesterday, however silly it may be, that anyone from Ancient Egypt should be offended by the start of this film.

Based on the age Emmy offers later in the film, by the way, she should have been alive during the reign of Mentuhotep II

--but it serves its purpose. The animated opening titles feel very mid-80s but play a little too silly for me. Emmy hooked up with

The balloon bit is nonsense. The hedge bit, the pizza bit--Switcher is a selfish ass who should not be hired to do anything creative where he also has to follow instructions.

Rachel Bays at The Advance Titan describes some cinematic gay coding: "...soft-spoken, moving about in a 'dainty' fashion or being physically weaker than the leading male protagonist." Jonathan Switcher is the male protagonist, of course, but he is definitely soft-spoken, and his movement could be called dainty, but most importantly, he is physically weaker than everyone in this film except maybe Estelle Getty's Claire Timkin. As noted yesterday, of course, all the males in the film feel a little effeminate in their various ways. Armand is the most overtly heterosexual but in a way that feels like overcompensating. Just like Felix runs around trying to be hyper masculine (walking around with his baton out), but with his highwaters and his impulse to homophobia, he feels a little like a closeted, self-loathing homosexual himself. He does seem a little too eager to strip-search Switcher. Richards' slicked down hair presents him as an 80s douche, obviously, but also potentially coded gay himself. Looking to turn on the old-school Prince and Company and join the flamboyant Illustra. B.J.'s outfits work the same way--obvious 80s douche, potentially gay.

It occurs to me that a lot of men dressed pretty gay in the late 80s.


(Weird note: I never got Hollywood's line about meeting Albert for dinner following by "Hope he doesn't mind." And, it just hit me as something hilarious that he's going to surprise his boyfriend maybe out at dinner with other people, maybe at home. Hollywood is hilarious.)


Felix just openly attacking Switcher after he finds him rolling around with Emmy is a) a homophobic attack? 2) an envious/jealous attack? 3) a metaphor for the gay sex Felix wishes he was having with Switcher because he's stuck wandering around at night with a dog as his best friends because he couldn't possibly come out of the closet because it's 1987 (technically, it's '86, actually, given the calendar we see outside B.J.'s office), Reagan's America, and he's a good Texan boy working security.

Meanwhile, Mrs. Thomas (a fellow Prince and Company employee) thinks nothing of Jonathan and Emmy spending time in the Women's restroom.


(I always thought that old couple on the street was funny, but it's newly funnier. They see Jonathan with Emmy on his motorcycle. The woman says, "Look at him, with a dummy." The man replies, "Who are you to criticize?" Which feels at first like he's insulting her, which I think is how I always took it. But, if she's criticizing Jonathan for being with a dummy, her husband's question means she is also with a dummy. So the man is insulting himself.)

Then, Armand has a problem getting it up (which, was this the first instance of that problem I'd seen on the big screen?) and Roxie needs to stop trying to date guys who are not into 'normal' women.

To Felix, all the female mannequins look alike.

Jonathan is really quick with handcuffs. 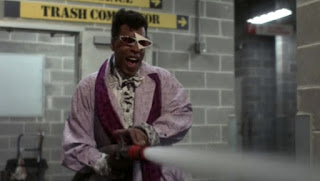 Hollywood likes to fight and kiss boys, and he gets to turn a hose on cops (or at least security) which is a great moment for a gay man, and for a black man.

And, I never got back to the Advance Titan piece, or any other piece on gay coding... But, I think I made my point.
Posted by robert e g black at 10:19 PM