which, let's be honest, has lately been me complaining about movies that I didn't know enough not to like when I was young, and might get worse with the string of comedies in '87--

and it might also get more serious in the dismantling of 80s cinematic tropes. The casual racism and sexism, homophobia, reliance on stereotypes and simplistic characterization--it ought to be interesting.

The opening of this film ought to be offensive to anyone from ancient Egypt. At least they didn't play "Walk Like an Egyptian" over the animated titles.

Roxie should have been Julia Louis-Dreyfus, coming off of Soul Man, but it looks like Louis-Dreyfus was looking into tv work in '87. She was in the Family Ties spinoff attempt, The Art of Being Nick in August, then an episode of Family Ties (as a different character) in '88 before being a regular on Day by Day, '88-'89. But Roxie isn't the point, is she. We've got Estelle Getty right in the middle of her run on Golden Girls, James Spader coming off of Pretty in Pink, G. W. Bailey coming off of two Police Academy films already, among other things. Meshach Taylor coming off of...

Actually, this is worth its own thing. I don't think I knew Taylor before his role here as Hollywood, but his IMDb says he had done a bunch of tv roles before this, a couple movies, including Explorers, which when I was a movie I loved as a kid, but for whatever reason we just never had it on video so it didn't make it onto this "fixture" list of mine. So, while I loved that movie, I don't remember it like I remember so many others, and I cannot recall Meshach Taylor in that film. Ethan Hawke, sure. River Phoenix, sure. Even Amanda Peterson (who starred in Can't Buy Me Love which made the list but I will be skipping because I already wrote about that one). And, I only just learned that Taliesen Jaffe (from Mr. Mom and Critical Role and many things in between) was in Explorers as well. I should watch that movie again sometime... Only, not here, I guess, because I am well past 1985.

Then our leads: Kim Cattrall coming off Big Trouble in Little China. And, Andrew McCarthy--who, like one of his two nemeses here, Spader's Richards, was also coming off Pretty in Pink.

And, it is remarkable how much I still have some much of this movie's dialogue in my head. 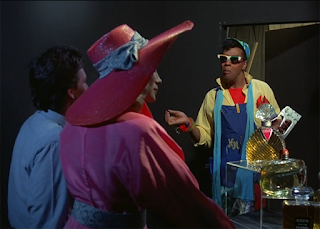 Also, unlike with Hoosiers the last couple days, I am inclined to put myself again in the time and place where I first saw this and wonder something. Hollywood is a bit of a caricature, the nervous, flamboyant homosexual, except even at the time I loved that character. So, my wonder now is, was liking this character one of the first times I was a fan of an openly gay character, was it a stepping stone to me getting past my conservative upbringing and accepting people that weren't that same old cisgender heterosexuals? The movie uses passing lines about homosexuals that might be offensive--Felix assuming Jonathan is also gay like Hollywood and, his great line: "You mean, they got 'em in Ohio?", for example. But then, I'm wondering if one couldn't make an argument about this whole Pygmalionesque plot as a sort of metaphor for being queer. You know, secret love you can't share with the world. Happens at night. The male authority figures are all very suspicious (and eventually openly violent). I mean, Jonathan's last name is Switcher, for Phil's sake.