more to the game than shooting

The description on STARZ for today's movie begins: "The best sports film ever?"

As I tell my Speech 101 students, don't start with a question. It gets me thinking, gets me not paying attention to you speaking and, in the case of this description, has me thinking about other films. I'm not a sports film kind of guy. I mean, I like some of every kind of movie, I'm sure, but if I ranked my genres--and I recently did just that, actually, while running a bracket of my favorite films on my podcast Cock & Bull--sports film is not near the top. My top 380 has so few that would qualify that when I broke down the list for an excel sheet, there wasn't even a column for it.

A couple that might qualify:
A couple documentaries:
The Wrestler comes pretty close to what makes a "sports film", and that's on the list as well.
But, the only one on the list that, I suppose, is really a "sports film" is The Karate Kid (1343 1344).


--but, not necessarily dislike; for example, Hoosiers is a great film


(and is the one I'm watching today, by the way. Just realized I hadn't said that.)

but not because it's a great sports film. It's a dramatic story done well--

for sports films is similar to my dislike of most movies about writing or about artists. Usually, the cinematic version of such a story cannot really tell you the story of the creative process. And, maybe a film like this one tells you plenty about the sport


--I actually don't know, because I also have never played much of sports outside of school. I was on varsity in volleyball and I did play basketball for a church team (though only because I had to, and I eventually got out of it) and I tried out for baseball as well. I also don't watch sports much. I used to watch a Dodgers baseball game from time to time because my family was into that, but give me access to a second television or a computer and I'm watching something else or playing a video game instead--

but it feels more like the sport is just dressing. Someone who likes basketball can appreciate it. If I remember right, the games for this film were not choreographed per se except for certain moments. They just had the players play and worked out what made sense for the story.

But also, sport is not the point. Of this film, or of any sports film. Like most any action film, adventure film, even any romantic film, the points is the characters dealing with a struggle. In this case, as a team. Not much different from, say, The Lord of the Rings or Star Wars.

Half hour into Hoosiers, I'm not even sure Coach Dale knows what he's doing. It's like a movie about a teacher. We're stuck with that teacher, this coach, so we have to assume he's doing it right. But, I'm thinking of the recent The Way Back with Ben Affleck, for example, where it plays pretty close to Stand and Deliver (739) or Dangerous Minds (743) than something specifically sports related. New authority figure comes to the school, other adults don't necessarily like what they're doing, some of the kids don't necessarily like what they're doing, but they just keep doing it until the script tells us that it works, and all ends well.


(Or, SPOILERS, in the case of The Way Back it actually doesn't end all that well, which may have been the one bit of that film that made it feel somewhat original, or at least bold. But even in that, it's like Hoosiers except Coach Dale (Gene Hackman) and Shooter (Dennis Hopper) have been mashed into one character.)

In his book The Sports Film: Games People Play, Bruce Babington offers Invictus as his initial example of a great sports film. Invictus, he writes, "through its sports narrative addresses not just sporting matters but wider issues, not implicitly as many do, but very explicitly, this providing an overt opening example of the genre's workings." Hoosiers, just on a casual pass, is perhaps just as interested, as it is in basketball, in the idea that small town folk can feel stuck, and need to find a way out. Myra (Barbara Hershey) is not just arbitrarily trying to keep Jimmy from being on the team; she specifically takes a dig at Dale, after saying she wants Jimmy to get an academic scholarship:


I don't want this to be the high point of his life. I've seen 'me. The real sad ones. They sit around all their lives talking about the glory days when they were 17... A man your age comes to a place like this, either he's running from something or he has nowhere else to go... Just stay away from Jimmy. I don't want him coaching in Hickory when he's 50.

And that's what Hoosiers is about more than basketball. It's about a guy who failed at his job--in this case, he assaulted one of his own players--and needs a comeback. All we really know about his way of coaching is that it is unlike the last coach or the interim guy or what the players' fathers might want. He demands four passes before a shot. Is that good? I don't know. Does it even work? The film suggests it doesn't go well. I mean, the team doesn't start really winning until Jimmy joins the team to keep Coach Dale from being removed. Why Jimmy believes in Dale--the film doesn't really tell us. The basic gist is Dale cares more about playing well than winning. But, for a sports program to survive long, I would expect one thing to be the other and vice versa. You don't have to be the best but you gotta do something to justify your existence. 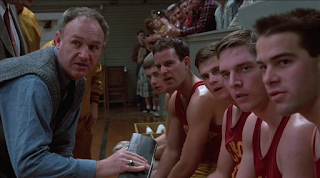 The problem I have is I want something less vague. What about Dale's coaching makes the Huskers better? What about Shooter made Dale think he could coach at his side? What about Dale made Jimmy want to return? Actually, that last one is easy; Jimmy clearly enjoys the sport and would have probably come back at some point; the bigger issue is why after Jimmy returns does it feel like Myra's reasoning for keeping him away--and Myra's role in the film, really--just doesn't matter anymore. Jimmy's absence feels like a gimmick for the first act, or two acts, I guess; I wasn't paying attention the timing on when they wanted to get rid of Dale and Jimmy deus ex machinaed Dale's continued job as coach.

Roger says the film's structure is


the broad over-all structure of most sports movies: It begins with the problem of a losing team, introduces the new coach, continues with the obligatory training sequences and personality clashes, arrives at the darkest hour and then heads toward triumph.

To be fair, if you boil any film down to its primary beats, everything is pretty generic. Every horror film is a bit like every other horror film. Every science fiction film is a bit like every other science fiction film. Every fantasy film. Every romantic comedy. Every buddy cop movie. Every sports movie. Jimmy is in this movie because the movie needs Coach Dale to be the underdog and barely survive the town of Hickory. Shooter is in this movie because the script needs something horrible to happen in act three. Myra is in the movie... Actually, once Jimmy is on the team, I'm not sure why she ever was in the film at all. She was an obstacle posing almost as a potential romantic interest, but then she just kinda went away (she will be back later, but it's like a stray unrelated subplot at that point).

The aforementioned Babington suggests that sports films typically follow a pattern described by Bordwell, Thompson, and Staiger in The Classical Hollywood Cinema: "causality, consequence, psychological motivations, the drive towards overcoming obstacles and achieving goals." One of those doesn't really fit well in Hoosiers, though. What are any of these characters' motivations aside from the ones we put on them because maybe we've been in a similar place before? Not that there's necessarily anything wrong with letting the audience identify with characters and put ourselves into the story, but Myra's urge for Jimmy to have something better than basketball is important. Her own inability to really make it out of Hickory--she did go to grad school but ended up back in the small town--is important. Dale's anger issues are important. Strap's religion is important. But, do we know any details about any of these things. We almost get detail about Myra, but then the movie moves on. We start to learn about Dale's history--which might hint at the reasons for his anger issues--but then the movie moves on. Character, psychological motivation, is secondary to just playing, winning, overcoming obstacles and achieving goals.

And, while I'm watching a film like this, I guess it works for me. But, afterward, I'd generally rather watch something else.
Posted by robert e g black at 9:11 PM