if you just eased up on the thing, you could handle it

- May 12, 2020
The thing about SpaceCamp is, nevermind the silly space visuals of the opening titles (and when Max freaks out looking into deep space), nevermind the silly turns of the plot, and the simplicity of the characters, I still liked it back in ’86, and I still kinda dig it.

I can see all of its parts moving now, of course. And the one part that fits badly, but I’ll get to that.

(* his relationship with Jinx is also, of course, why they are all endangered in the first place.)

Before I continue the obviousness, there is some cheap audience attention getting early on. Kids are picking up their team tags, and the people handing them out say their names, but when they say Kathryn Fairly, Kathryn repeats her name. When they say Hideo Takamini, he repeats his name, just in case we don’t notice that Kevin steals his tag and his place to be on the same team as Kathryn.

But, back to the obviousness. Kevin is a screwup; he only went to Space Camp because his father would also get him a car. But, he steals Hideo’s spot, and he is given the commander spot that Kathryn wants. What he’ll do to save the day is not immediately obvious, but clearly his whole thing is about his identity and his inability to be what the adults want him to be. And, that means responsibility. So we can assume he will step up and be a good commander when he needs to be to save the day. As I mentioned yesterday, we see that he is quick to protect others when it comes down to it when some other kids are bugging Max about what’s in his locker.

Andie is only working Space Camp this particular summer because she was not chosen for this very Space Shuttle flight she ends up on with the kids. And, the film begins with her in 1963, her parents inside watching news coverage of John Glenn but she’s fine with sitting out in a field watching him fly over—a more distant, but a more direct connection.

(If you know the timing, you can spot NASA vehicles passing over. In a clear enough sky, you could spot satellites probably (though they’re fairly small) as well. Not long after this movie was out, we had a family friend who had retired from working at JPL, and she could get us passes to get into the closer bleachers to watch shuttles land at Edwards AFB. We saw several shuttle missions land over the course of a few years, and even got to see one of them from maybe a hundred yards—and a helicopter with military guys manning a mounted machine gun out of the open door flew right over us. But, even better, one time when we were at the retired JPL lady’s house, soon to drive over to the base, we were outside to see the shuttle pass by overhead an orbit ahead of landing. It wasn’t much more than a dot, no bigger than the stars visibly, but it moved steadily from horizon to horizon. That was kinda cool. I never wanted to be an astronaut, though. My sister Brooke was interested in that kind of thing, even had brochures for Space Camp… maybe the summer right after this movie came out. She had books about the Apollo astronauts, and one year—I think it was a birthday surprise—her bedroom ceiling was painted to have glow-in-the-dark stars, planets, even a space shuttle. When she went off to college, that became my room. So, for a while there I had those stars on my ceiling.) 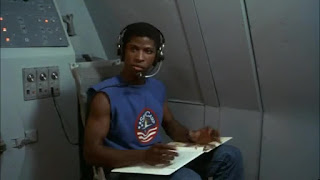 The character who gets short shrift is Rudy. Shocking, but it’s like a bad 80s cliché—the black guy is mostly just there, supporting player to the other characters’ stories. Well, so is Tish—she does not have a storyline of her own, no matter what her morse code (or her belt) means later—but it feels like her character type—a valley girl far smarter than anyone thinks she’ll be—is more positive. Rudy just wants to be the first person to have a fast food franchise in space—which has no bearing whatsoever on his role in the plot later—and he likes science. Regarding the second thing, he isn’t good at science. His explanation is simplistic—he just can’t figure some stuff out—so we can’t be sure what his problem is. Maybe he doesn’t test well. But then, his save-the-day moment comes when he randomly remembers that the space shuttle landed somewhere other than Edwards in 1982.

(The Challenger mission that exploded was the 25th shuttle mission set for space. The first was in 1981. Five of those 25 landed at the Kennedy Center in Florida. Eighteen landed at Edwards. One—STS-3, Columbia, launched 22 March 1982—landed at White Sands Missile Range. The only shuttle mission to ever land there.)

To be fair, we can assume each of these kids has been paying some attention to NASA and to shuttle flights. But, Rudy’s job on the mission they end up on is to handle the shuttle’s arm (which, Max needs to shut the fuck up about it wobbling in zero g), to tell Andie how to attach the oxygen (which one of the two tanks doesn’t connect right, resulting in her being injured—

—and Kathryn and Kevin have to really do their jobs to make sure everyone survives), and to freak out when oxygen is low. And then, there’s his randomly remembering the shuttle landing somewhere else. He doesn’t remember where, though. Remembering that takes a group effort.

(And, the Wikipedia description of the plot doesn’t even credit Kevin with this at all, because the black guy wasn’t neglected enough by the movie itself… I think I’ll change that.


Jinx does more to affect the plot than Kevin does. And, that’s a problem.

For the record, Rudy only meets 3/5 of the criteria for being a magical negro, discussed most recently her just a few days ago.

Also, because I think I’ll move on to another film tomorrow, I want to complain about the 12-hour countdown in the film. If you’ve got 12 hours worth of oxygen, and you don’t have to do any of the work that a space shuttle mission normally might—science experiments and whatnot—you can all just relax and conserve oxygen intake. Andie says they only need another hour’s worth. Settle the fuck down and relax, and you don’t have to risk your lives with two of you having to spacewalk.