I write about it yesterday, and my sister Brooke comments on Facebook that it's one of her and her husband's favorites. My friend Jeff comments that "it holds up as a solid comedy." And He adds, "Also, check the run time 1:31 minutes. It never overstays its welcome, does it... Judd Apatow."

I don't quite get it. I mean, yeah, it is joke after joke after joke, and it doesn't give you much chance to think about any of it unless you're a nut like me (or, really, like Jeff, since he is also a movies-by-minutes podcaster). The movie both takes too long to get started and feels like it is trying to rush through the beginning to get to the house falling apart. Then, it's a series of visual gags with things breaking, and then a couple nice relationship moments and it's over.

And, it still has time for the entirely useless opening and closing with Walter's father.

And, I really want to believe there's a very specific satire going on here that I am missing.

Why is Max a conductor, for example? He could simply be Anna's rich ex and his role in the plot is the same. Why do we need to see Walter meeting with multiple musician clients when they have nothing to do with the plot at all? Even the kid he borrow money from to buy the house is irrelevant. That Walter spends all his own money is enough for the effect. Even borrowing money doesn't need to be from someone so specific.

Walter walking along side his--real estate guy, I guess Jack is--who is jogging and has a heart attack is funny but also pointless.

This movie has specific moments and specific bits of dialogue that are great.

Max: "Can I speak frankly?"
Anna: "Anything is possible."

But, why the music angles? Especially as it makes it look like both Walter and Anna are fairly successful in what they do, so why are they broke? Are they just always bad with money? Is it an 80s thing? I mean, my parents declared bankruptcy in the late 80s. Is that what this movie is about? It doesn't matter that Walter and Anna are both good at what they do, that he can actually get his hands on $200,000 cash by Friday, and they both can also take a lot of time off to work on their house. This is long before there are tv shows about people flipping houses, and I'm not sure Walter and Anna even buy the house in order to sell it. (This movie reminds me of the superior Funny Farm in several ways, but I supposed I will get to that when I get to Funny Farm in 1988.)

What did we think of musicians and lawyers who represent musicians in the 1980s? Who were Walter and Anna in 1986? They're successful but they have no money. They live in New York but seem eager to move outside the city. They are fairly committed to one another, but--gender twist--she doesn't want to get married.They have a real estate guy but crash at her ex-husband's penthouse while he's in Europe.

The montage of chaos has begun.

So, I look up the Savings & Loan Crisis to distract myself from the inanity, and I'm sure there's something deliberate about The Money Pit coming out when it did. The Federal Savings and Loan Insurance Corporation closed or resolved 296 institutions from 1986 to 1989, and... Honestly, I'm not sure what that means, but I know housing got particularly cheap. And, specifically, the Tax Reform Act of 1986... did... something. It eliminated the tax deduction for interest paid on credits cards, which, apparently--I'm just trusting Wikipedia on this one--encouraged the use of home equity through refinancing. People were spending money on houses and... Things. Money they didn't have. And, the American Dream was essentially being revealed as bullshit at the same time that people were being encouraged to buy into it. So, Maybe Anna's constant state of delirium bordering on denial is just the American way of things. Borrow money, buy things. Those things break. Borrow more. Buy more. Hire a bunch of Mad Max rejects to fix it for you, and then call yourself self-made even though it was all borrowed money and hired labor and you barely did anything yourself, and kinda ruined your marriage in the process. 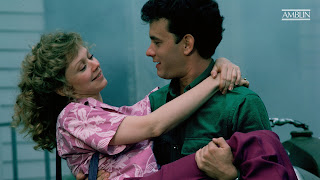 Little moments stand out as the apparent satirical movie they were trying to make but not doing a great job of. When Walter falls into the hole in the floor for example, he falls slowly, then when he stops moving, he pauses, and then continues to count his cash for the bribe for the permits guy. This movie clearly has something to say, but it spends so much of its effort on ridiculous visuals instead of more thoughtful moments that I'm not sure anyone seeing in this in 1986... It was the 27th highest grossing film of the year. Cost around $10 million, made $37.5 domestic.

The scaffolding falling feels like a deliberate metaphor for... Our financial systems, I guess. Like, it's all so complex and bizarre it will collapse one day and we won't even know it because we'll be blind to it.

I've noticed a couple user reviews on IMDb where people say the critics didn't realize this movie wasn't trying to be something great. But, I think it was. It was trying to be a biting satire. Something like 9 to 5, maybe. It just can't manage it.

Reviewing the film for the Chicago Tribune, Sherryl Connelly, explains,

Yes, Walter and Anna are young professionals who learn to play out the intimacies of their life before an army of construction workers, but who, when worse come to worsen, can always find someone to hit up for &75,000. This may not be a comedy for the masses.

Except, all the silliness appeals more to the masses. Or did we (or older people than me, at the time) find it so funny because this was happening to a couple yuppies who had far too much privilege to begin with?

After referencing St. Elmo's Fire, in which a character--I barely remember that movie so I don't remember which one--"finds her material goods in danger of being repossessed, she becomes suicidal," Connelly, concludes:

And that, in fact, may be the only "message" in these movies. Go forth, buy and be happy! You are what you charge, and remember, sell short rather than out.

And, I think I understand that last line.