a strange emptiness about it

Obviously, Crocodile Dundee has some casual sexism and racism...

And, some unfortunate choices regarding the same, nevermind it being the 80s. For example, Sue begins the film several weeks into a stay in Australia, writing for the New York-based Newsday. She goes on her own to find the titular character in the outback, then goes with him out into the wilds. And, just like Willie in Temple of Doom or Joan in Romancing the Stone, she freaks out at animals sure. Eighties woman gotta eighties woman. But, Mick says she couldn't last on her own in the outback and she not only immediately picks up her stuff to leave on her own but also, when he tells her to take the rifle and mocks her by point out the dangerous end, she fires it right next to his toes without even raising it to aim. This is like cinematic code for she's a badass. And, we're set up for Sue being on equal footing with Mick. She even is smart enough to wear a hat and a big ol scarf over her head while she's out there walking. But then--in a moment spoiled by the trailer for the film, it turns out--she strips down to her g-string bathing suit, and fills her canteen in a watering hole occupied by a croc. 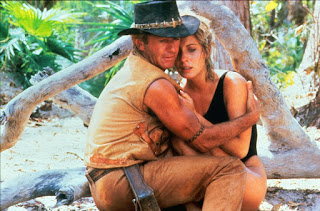 And, of course, Mick has been following her, gets to eye her bare flesh in a very 80s display, and then leaps to her defense when the croc grabs her canteen and could very well drag her into the water and kill her. Because, that bit where she was badass--that meant nothing. Instead, she needs Mick to survive, and he's also going to turn out to be the real man she wants to be with later instead of her successful boyfriend back home in New York. A guy who works in publishing and wearing a light blue triple-breasted suits; by 80s code, he's a douche, and he kinda is one but that's not the point. The film has almost no plot. Sue crosses a bit of outback with Mick, then she convinces him to come back to New York with her. He has misadventures where he saves random people, gets driven around by Sergeant Al Powell a couple years before Die Hard, misunderstands prostitution, assaults a trans woman and a "normal" woman, who of course is turned on by him pulling a Trump move on her, and we're supposed to like this guy?

And, Sue is supposed to not only turn away from her regular life but have no blowback from it all? Seriously, her father drives her to find Mick at the end of the movie. There is zero consequence to her turning down Richard's proposal (and she doesn't even quite turn him down, the movie just kinda skips that part).

There are no stakes to this film, is the thing. Which, given the film's invoking of "walkabout" could have been something deliberate, like an earlier form of Eat Pray Love or Wild or even Into the Wild, or any of those wander-off-into-the-wild-to-discover-yourself kind of movies. Imagine we had a better sense of Sue as a person before she's already off in Australia, or, he'll, just take what we know of her from the opening scene--she's been on an extended work trip already, and she decides she's staying longer to chase another story. After Mick tells her about the croc attack--the death roll monologue--she notices the spent rifle shells in his boat and knows damn well he wasn't just fishing. She is good at her job, she does what she wants, and she gets what she wants. She shouldn't be panicking at the sight of a snake like the aforementioned Willie or Joan. She calls her ex-husband "the original rebel" and says, "You name it, we marched. Anti-nuke. Women's Lib. Save the whales." The cheap, easy way out is to think she marched because she was a poseur and her stint in the outback is the same thing. But, Linda Kozlowski's performance sells something better.

To be fair to the movie's overall underselling of Sue, she says of where her ex is currently, "He's probably marching right now for the gay Nazis." Whatever that's supposed to mean, other than some bullshit conservative messaging on the gay agenda, and she' stunned from someone with an interesting (to me, at least) past as a protestor to something boring. Then, it' she very next morning that she separated from Mick to go on her own. The movie just can't help but send mixed messages about who Sue is supposed to be. After that gay nazi remark, she asks Mick, "Haven't you ever protested anything?" He replies--very amusingly to the 80s audience, I'm sure--"Sure, every time I get thrown out of the pub."

"I'm serious," she says. "Where would you sat ad on, say the nuclear debate? What about the arms race?" These are legitimate questions that, again, imply a legitimate woman.

"None of my business," he replies.

"None of your business? How can you say that? It's everybody's business. Got to have an opinion." It could be an early you-go-girl kind of moment, but no, Mick can't take it seriously, and the writers let him dismiss it with some pseudo-knowledgeable bullshit when instead she asks him about the Australian Aborigine's land claim. Mick offers a line that sounds more like something someone wrote about Aborigines than anything that actually fits them. A line about how they don't own the land, they belong to it. Which a) ignores the point of her question and b) ignores the larger issue because Mick just can't be bothered to care.

Nevermind his lies. Telling time by the sun after secretly checking a watch. Shaving with his knife after really using a razor. His can of beans. (Even the water buffalo bit feels like a scene meant to have a payoff where we discover that particular animal has been trained for this display.) Saying Nev "thinks his way" through the bush right before we (and Sue) hear Nev off in the distance stumble over something and proclaim that he hates the bush. Mick is just a series of punchlines, and the film refuses to let Sue be anything but a sounding board or a target, even after repeatedly giving her more meat to dig into.

Regarding the potential reboot with Danny McBride, Luke Buckmaster at Australian Film has a great line:


...to capture the spirit of the original three Crocodile Dundee movies... In addition to being vulgar and witless, the new film would need to be sexist, racist, homophobic and transphobic. It would need to have awkward jokes unfunny at the time of release and even less amusing when revisited years later.