Recent high school graduate who, sure, has flown a fighter jet at least once--we see it in flashback--plans a rescue effort in unnamed Northern African nation along with a few friends and a retired pilot in three days (and that includes executing the mission itself). The plot alone is silly.

But, worse--and I almost wish I had time to catalog all of this--it uses the same footage over and over again. Obvious case in point: every single time Doug fires a weapon, there's the same shot of thumb pressing button. 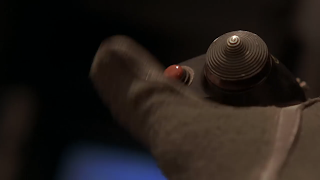 And, when it's the machine gun, always the same closeup of it firing: 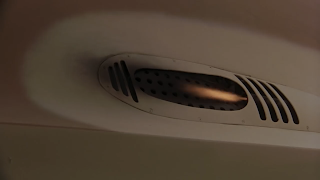 And, then there's everything in act one between Doug's father's capture sequence and Doug and Chappy teaming up. Doug drives like an asshole. Then he fights with Knotcher for also driving like an asshole. And, then they can't fight because--and this is an almost clever infodump scene--Doug can't get in trouble for fighting again. Then, brother shows up with Doug's rejection letter, which he tosses, then exposition about his grades and stealing time on the simulator and Knotcher not only already has retrieved Doug's trash but is inside the fast food booth reading it out on the loudspeaker, and now they gotta run the snake, which killed some kid called Jimmy Branson.

And, I remember the dead kid's name but cannot for the life of me remember girlfriend's name. She's played by a young Melora Hardin, but her name? I got nothing.

And then we learn that Chappy knows planes, knows the snake, knows about Jimmy Branson, and character introductions out of the way--except for all the kids who steal classified intelligence later because who needs to know them?--we get the snake sequence. Which has nothing to do with the rest of the movie. It is here so we a) get more flight footage, 2) see Doug is a rebel who is willing to endanger his life and the lives of others, and d) for another song to play, I guess. Doug's rivalry with Knotcher is pointless, is never mentioned again after this sequence.

But, hey, Knotcher and his friends are willing to casually sabotage Doug's plane to the point he might die, and this whole sequence feels like it belongs in a different movie. But, the 80s were full of shit like this, I suppose. The chicken with tractors in Footloose (1326 1327). The chicken with cars in The Heavenly Kid. And it feels like lots of other movies. At least The Heavenly Kid is partly set in, and then deliberately aping, the 50s. Which feels like Rebel without a Cause.

I wonder if it would hold up better as a character building sequence if Knotcher turned up to help Doug later at some point. Instead, it's like he literally doesn't exist anymore after the snake run is over.

And then Milo arrives, and he reminds me of River Phoenix as Wolfgang in Explorers (a much better performance in a much deeper role) and I wonder why that movie wasn't on my "movie life" list for 1985...

Except I know why. This was supposed to be a list of movies I watched (or we watched, my sisters and I, or my family and I, sometimes with a family friend over on a Saturday night after church, with burritos and probably popcorn)--

(Speaking of Footloose, the prom bit in this movie is also a pointless tangent.)

--time and time again, not just movies that I really liked, or moves that were probably just as influential on my understanding of movies. I saw Aliens in the theater, watched the original on television, and in my teens, I would buy both (and the third one) on VHS, but they weren't repeating fixtures. Stand By Me--I loved that movie, and I eventually had it on VHS as well. But, I remember specifically, my mother didn't like the language in that movie, so it wasn't something we owned. (Although, I actually included in on the list anyway, I just noticed.) I loved An American Tail, could sing all the songs from it, but we didn't own it, didn't rewatch it.

Backtrack to 1985. Add Beverly Hills Cop, Rocky IV, Witness, A View to a Kill, Spies Like Us, Jagged Edge.

And more. I could make so many lists. Some of which I've written about in one context or another in this blog, but many that have fallen by the wayside.

And, I just noticed that right before Doug's mom tells him and brother that dad's going to be executed, some other woman motions sister away right beforehand, which is really weird. But, like Knotcher, sister is irrelevant to this movie. I'd remembered brother, vaguely. I'd remembered him on the phone with an older girl for some reason in his first scene. I don't know why that scene is in the movie. Or why he has a poster of Brooke Shields in The Blue Lagoon when it would make more sense for him to have something more timely like... I don't actually know. Heather Locklear maybe? First girl I had up in my room was Joanne Whalley as Sorsha in Willow. And, that movie is next year, 1988.

White friend's sister allegedly has a thing for gate soldier just so Doug can sneak onto base. Sisters whose names I can't really remember (though I looked them up to reference them yesterday) we're only promised a space poster so they'd have an excuse to go into wherever it is their father works. Really, everything in this theft sequence is vague at best. Maybe the stuff they say about weaponry and whatnot makes sense, but it doesn't even matter. It might as well be Star Trek technobabble.

Three days. In which, kids steal intelligence. Doug hangs out with Chappy and they go to that black... Italian... bar. That's one. Day two, Doug and Chappy fly jets. Doug can only hit a target when music is playing because he's all American or something. Day three they fly the mission which takes a long time, and their destination is already half a day ahead, but somehow dad hasn't been executed yet. It's silly. It's a little childish and stupid, but then so we're action movies starring adults a lot of the time.

Vadim Rizov, whose AV Club piece I cited the other day, ties this movie into our urge to fight Vietnam again and win. Just like Rambo. In 1985, Roger Ebert called movies like Uncommon Valor and Missing in Action and Rambo the "this-time-we-win films". In Uncommon Valor, Colonel Rhodes specifically says, "this time nobody can dispute the rightness of what we're doing." And, Iron Eagle fits right into that same slot. Doug's father is being held even thought he didn't violate unnamed country's airspace. His trial happened quickly. His execution looms. And, it's down to one black man and a bunch of kids to make sure that the right thing is done because American military bureaucracy cannot be bothered.

All these nameless foreign enemies just needed an eighties bomb* dropped on them.

(* actually, the big red firebomb in this movie is called the Hades Bomb, but this name seemed more apropos.)