i know what i’m doing

- May 24, 2020
The music to Hoosiers sounds like something else to me, like a bit from a song... Or maybe I've just heard this soundtrack so many times that I recognize it easily. Like the music from The Man from Snowy River (1288 1289 1290) or... So many others, actually. Friday night was the sabbath growing up, and that often meant some music playing and a card game, or older sisters would come over with their husbands and kids, once they had husbands and kids. Later when I had a wife and kids, we'd drop by my parents' house on a Friday night sometimes, too. A tradition left behind now. Waiting for a new generation, maybe.

I have complaints, and I will get to them. One of my complaints I am inclined not to bother much about because it turns out the Myra Fleener/Norman Dale relationship got short shrift in the editing process when the film got streamlined from a much longer first cut. As it is in the end product, Myra plays a vital but entirely manipulative and ultimately unnecessary part in act one, disappears as act two goes, and then suddenly she shows up for Norman to kiss her--I will complain about that scene later--as if their relationship had been building steadily. But, it wasn't building at all. I will assume the article I saw that mentions the first cut and what got lost after was correct, and say, it sucks for the final film that this relationship that might have been quite vital to the original seems like something tacked on instead.

Norman Dale is a liar, by the way. He tells Myra that if he is convinced to go after Jimmy, she will be "the first to know" but then he just shows up and talks to Jimmy, and goes all reverse psychology on him because Norman is kind of an ass. 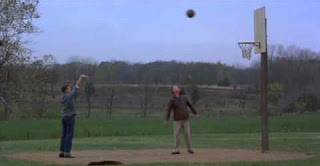 Jimmy is shooting baskets--and Maris Valainis just ignored Hackman and shot to make all those shots in a row--and Norman approaches. "Jimmy, I didn't see you in class today. Any reason you want to tell me about?"

"You know," Norman says, grabbing the ball and passing it back to Jimmy, "in the ten years that I coached, I never met anybody who wanted to win as badly as I did." Jimmy keeps shooting. "I'd do anything I had to do to increase my advantage. Anybody who tried to block the pursuit of the advantage

I'd just push 'em out of the way. Didn't matter who they were or what they were doing.

But that was then." Jimmy keeps shooting. So, Coach Dale turns his focus. "You have a special... A gift. Not the school's. Not the townspeople's. Not the team's. Not Myra Fleener's. Not mine. It's yours... To do with what you choose.


[then maybe don't show up at his... I guess it' s outside the school, not his home... to manipulate him]

Because that's what I believe." Coach Dale holds the ball a little longer on this one instead of just passing it back. "I can tell you this: I don't care if you play on the team or not." He passes it back. Jimmy takes another shot, and this time he misses. CUT TO Myra watching, then Jimmy making shots again. This is a kid whose mother is sick and whose father recently died, remember. The coach's move here is a dick move.

But then the entire school one-ups him at the pep rally, and Coach Dale steps up and defends the players he's got, and I think we're supposed to be moved, and to think that Myra is moved.
And, the movie doesn't give us any time with Jimmy, no time to get to know him, know what he's dealing with, or to know why he bothers to show up when the town wants to get rid of Coach Dale.


(And, it's really simplistic writing that Myra's own reason for coming back to Hickory is the same as (her reason for) Jimmy not being on the team: her mother got sick and her father died. One one level, it gives her reason to care about Jimmy, I guess. But, on another level, it's lazy screenwriting. But, maybe in the longer cut we cared that Myra tried and failed to make something of herself outside of Hickory.)

Dale insists to his boss that he knows what he's doing, and the movie wants us to believe him. But, it doesn't actually show us that we should. A big part of my master's thesis was about how I manipulate your impressions writing this blog. I control what you think of me. I cite sources casually, I reference other films and previous blog entries, because I want to demonstrate that I know what I'm talking about. I want to provide evidence for as much in the examples I offer, the sources I find. I don't just want to you agree with me because me say that I am right. It's basic research/citation management that I (try to) teach my speech students. And, instead--and I am hesitant to say this next line--I am getting a horrible politician vibe from Coach Dale, even a, dare I say it, Trumpian vibe. Say you know what you're talking about, and we are just supposed to believe you. Nevermind that the team is still losing until the star player comes back. Nevermind that your last coaching gig, a dozen years ago, ended because you punched one of your players. Nevermind that you then were in the navy for a decade and that feels like a footnote more than an influence on who you are today. You are simply what you say you are, and not in the positive way I sometimes might suggest when getting all leftist and preaching about identity and you be whoever you want to be and all that. Instead, here, Coach Dale says he's something, and the audience believes it, and I really just don't know why. At his best, he's setting up one of his Hickory players--I swear, other than Jimmy I don't know which is which--to punch a player from the opposing team. And, he should be removed from his position as coach. He could go back to the Navy, change his name to Reigert, and 15 years later be responsible for Owen Wilson miraculously deciding that the military is the life for him, nevermind that a whole other movie has failed to provide evidence for character growth or change.

And then there's that SMASH CUT to Coach Dale dunking Shooter's head in a sink even though the movie has not bothered to show us that Shooter's drinking is a problem yet.

And then there's that conversation late in the film where we learn about his past problems and he transitions from that to immediately kissing Myra and I kinda want her to punch him and file a grievance over his taking liberties because, seriously, that moment is not earned in the shorter cut, and I would wager that even in the longer cut, it is hard to go from I once punched one of my athletes to hey, why don't we kiss and be a couple because movies got to have romance or something.

And then there's that final play of the final game, where the movie just throws out everything the coach has supposedly done for this team and it's just give Jimmy the ball and win...

Except that was set up from early one, wasn't it? Coach Dale told Jimmy, "I never met anybody who wanted to win as badly as I did." So, of course, damn his own coaching, damn his own four passes before the shot, just give the ball to JImmy and win already because the audience wants to cheer like mindless fools and head home happy as can be.
basketball blog childhood deconstruction editing film films groundhog day project hoosiers movie movies romance sports