am i your fantasy?

As far as criticism goes, the biggest flaws in An Officer and a Gentleman come from pieces of the premise itself, pieces of 1982 American society as depicted. That there were towny women like the Puget Debs is believable. That their relationships with the men in Officer Candidate School might go like those of Mayo (Richard Gere) and Paula (Debra Winger) or of Sd (David Keith) and Lynette (Lisa Blount) is believable. Any inherent sexist bullshit, as I might term it most days, comes from the era more than the film. What I find remarkable within all that, though, is that--and obviously, Richard Gere got me thinking of this--is the differences between this and, say, Pretty Woman.

An Officer and a Gentleman comes from screenwriter Douglas Day Stewart coming off of The Blue Lagoon, and director Taylor Hackford coming off of Idolmaker. A combination that seems set for romanticism of some sort, to be sure. Roger Ebert says in his review, "Love stories are among the rarest of movies these days" even though I swear I quotes him (relatively) recently about some other love story from the era and how so many love stories were the same. But, I think he's going for a True Scotsman sort of argument here--the cheap love stories aren't true love stories. "This is a wonderful movie precisely because it's so willing to deal with matters of the heart." Then again, he calls Pretty Woman "the sweetest and most open hearted love fable since 'The Princess Bride.'" He says, of Pretty Woman, "Here is a movie that could have marched us down mean streets into the sinks of iniquity, and it glows with romance."

(For a record of how much I dislike Pretty Woman, and disliked it increasingly with each subsequent viewing, you can see

to get the idea.)

The "romance" here doesn't actually go that much deeper. The difference is that the people involved here feel like real people. Real-life romance doesn't often go that much deeper, which is why we love it when people post dramatic proposition photos online, or how we used to love fucking coffee or wine cooler commercials for their ongoing romantic stories. Romance is simple. It isn't profound. Love--or what we call love, because we must often make the distinction, as Roger does--is profound. Or it can be.

What's interesting here--my take, not Roger's--is that Paula and Lynette are looking to be swept off their feet like some fairy tale, and the ending of An Officer and a Gentleman drives right into that fantasy for the audience. But, how Paula and Lynette seek the fantasy is entirely mundane and deliberately manipulative. The way I remembered Lynette's and Sid's story is different from the actual film, by the way; I remembered it as maybe she deliberately lied about being pregnant, not just that she was deliberately careless. Those two situations are not the same even if Paula judges her for the latter. Even if the film judges her for the latter. Lynette's halfhearted cheer in the final scene--"Way to go Paula! Way to go!"--is a sad statement on Lynette's own understanding of her situation, the reality of (assuming it's a realistic reality) these towny girls looking for a fantasy to take them away. Lynette still sees it as something far from romance, far from love; she sees it almost like a chore. There's a new round of recruits. New opportunities to worm her way out.

(Long-time readers of this blog might know I do not always by into love and romance as that lovely or that romantic, and my cynical side is tempted to interrupt here to suggest that every attempt at love is just worming your way out of whatever situation your in, hoping for a better one, that every version of love is just a fantasy...

Then again, I love movies. I love Dungeons & Dragons. I love fantasy. Plus--)

Mayo is in the same boat as Paul and Lynette in the larger picture, though he has more opportunities than they do, being a white American male. His famous scene--"I got nowhere else to go! I got nowhere else to... I got nothin' else"--that's the same sense of their lives that Paula and Lynette have. For Mayo, it's being an officer in the Navy. For Paula it's being his wife. And, look at the scene in which Lynette tells Sid there's no baby. Before she tells him there's no baby, simply because she's pregnant and he can get married and make some sort of a life for himself, nevermind the Navy, he talks about the being together. "I wasn't cut out to be a pilot," Sid tells Lynette. "I was faking it. I've been faking everything in my life up to now." He's not just talking about Officer Candidate School. He's talking about his whole life. "I'll get my old job back at JC Penney's," he tells her. "Hell, in two years, I'll be floor manager." He's thinking about the future. Nevermind the Navy, he's thinking about the future. Sid has a girlfriend back home. He tells Mayo this in passing but it's a huge part of who Sid is in terms of this plot, this story. That Paula's "Father" stares at and clearly resents Mayo at the family dinner is a huge part of this story, too. Paula's "real father" was one of those officers, got her mother pregnant, then went off on his Naval way without her. In this town, these young men (mostly men, anyway) come into town to be Naval officers and the young women chase after them, sometimes they succeed in catching them, and they flee. Paula and Lynette have grown up in this world, where everyone knows about the Puget Debs (even if maybe that's just Sergeant Foley's (Louis Gossett Jr) name for them. Mayo has grown up without his mother--she killed herself--and with an alcoholic, whoring father. He literally lived above a whorehouse at one point. He knows of women as disposable objects. And, despite how awful his father is, he still instilled in him some sense of honor in military service. And Sid--his brother died in Vietnam, his father was in the Navy, too. After he DORs*, he tells Sid, "I wasn't here for me... I was here for everybody but me. I was here for my big brother." Hell, his girl back home was his brother Tommy's girl before Tommy was killed. These are four people who don't have a lot of choices in their lives. We like to believe we've always got choices, but years of pushing in certain directions make it hard to turn.

(*DOR means he quit the program. In case you’re reading this and haven’t seen An Officer and a Gentleman.)

And maybe, what did I get out of this movie? I mean, I first saw it when I was only six. I saw it a lot of times over the next decade or so and have seen it maybe one time since. I probably remember the parody of this film's ending at the end of The Simpsons, "Life on the Fast Lane" in which Marge, who has been spending time with a bowling instructor, surprises Homer at the nuclear plant, and he carries her outside, into the sunset. 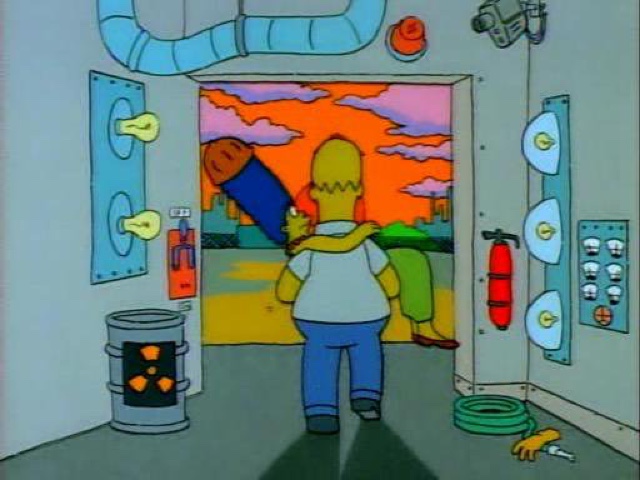 It's silly, it's parody, it's true. Regardless of what traps us, or what we feel is trapping us, that fantasy of the romantic ending, whatever it is--graduating the training, being whisked off our feet (literally or figuratively), winning a big game, climbing that wall, getting married, escaping the home or the hometown that has been burying us all our lives... Whatever it is. Movies make it simple. They don't (necessarily) make it dishonest. Mayo and Sid (and maybe especially Sid) use Paula and Lynette with no intention of letting their relationships go anywhere. Paula and Lynette use Mayo and Sid to get out of Port Rainier...

And, I can't believe I'm going here, but it’s a great line and if there's any truth to The Room, it's that men and women use and abuse each other all the time. It is the unfortunate nature of pursuing romance and fantasy. You have to push everything else into the direction of the fantasy. You want an airman to swipe you off your feet, you gotta hook up with a lot of airmen until you find the right one. You want to be an airman--and that is just as much about fantasy, a big, American, 1980s-especially, masculine dream.

(And that cynical side is getting all twisted in, here, isn't it?)

Young women are told that being the princess, getting swept away by the rich man from out of town, or the military man that can take you out of town, is the way to go. Young men are told they have to be real men, succeed in business, fight for your country, take responsibility for your family. And it would all be well and good if they all just succeeded, if all these things were easy.

Sid DORs, and then hears Mayo talk about how he was the best student, the best leader, the best friend, and then he proposes to Lynette and she turns him down because he quit. When he quit to take care of her. Even his one success, choosing something for himself, is a failure.

I called romance simple above. That doesn't mean it's easy. Achieving the fantasy... Well, if it were easy, it wouldn't be a fantasy.