to our two romantics

Another soundtrack that played a lot in our house when I was a kid: The Man from Snowy River. Bruce Rowland's score is iconic to me, more so than some of the great film scores out there that I know are great but just didn't get repeat play in the house I grew up in.

And, then the credits end with Directed by George Miller and I am 1) shocked because I never knew George Miller directed this, even after all the times I've seen it (far more times than I have ever seen The Road Warrior, a film I prefer), and 2) disappointed because apparently Australia's film industry rules allow two different directors called George Miller. I mean, that Mad Max George Miller also made Babe: Pig in the City and Happy Feet, so that guy could direct pretty much anything, and horse stampedes and cheesy close ups of angry horse eyes actually seemed right up his alley. But no, this George Miller directed Andre and A Mom for Christmas, which an ex of mine was rather cheekily obsessed with a good decade after that film aired on tv and should have been forgotten.

Had I noticed the director's name back in the 80s, I might not have had IMDb to keep the distinction clear. 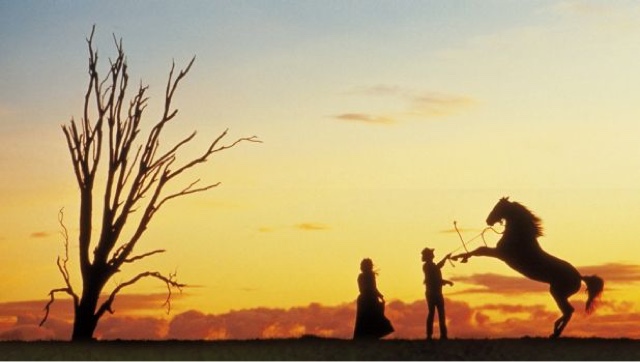 The film is basically an Australian Western, with a bit of romance to round it off... Not that the Western isn't inherently romantic. Jim (Tom Burlinson) and Jessica (Sigrid Thornton) have a "meet-cute" and everything, as he takes the reins of her father Harrison's (Kirk Douglas, in one of his two roles here) new colt that has been startled by a dog and inadvertently knocks her down, not realizing until after that she's female.

But, on the Western note, Banjo Paterson's poem that serves as basis for the film was written when Australia was becoming a nation. The National Gallery of Victoria says, "Although most Australians lived in cities, it was the bush and bush life that were seen as uniquely Australian and integral to the nation's identity." In particular, Paterson's poetry, including especially his most famous poem, "The Man from Snowy River", "celebrated the 'Australian' values of stoicism, resourcefulness, independence, egalitarianism and freedom that grew out of the hardships of life in the bush." Sounds a lot like American mythology and folklore and identity ideology. Regardless of the growth of towns and cities, no matter how much of our population gathers in cities even today, we love to think of America as this wild place we had to tame to live here, and we imagine that we are still fighting for it every day even if we haven't seen a mountain up close a single time in our lives. Or seen the wide empty plain, or a wild beast. If we look to the past for our identity, of course, every country could find the same thing, a struggle to survive against the might of nature, working hard for a light in the wilderness.

The film even fits with Will Wright's (1975) classical plot for the western except the villain(s) don't really threaten society. The villain(s) are society... sort of. The villain is civilization as represented by Harrison. Jim has no interest in being a ranch hand and would rather just live up in the mountains. Jessica has no interest in being a proper lady. The two brothers, Harrison and Spur (Kirk Douglas), are basically symbols for the competing sides of the city and the bush (respectively). And the story is basic Western stuff, romanticizing and idealizing the bush, rejecting (most of) the trappings of society. Wright's "fourth opposition... the opposition between wilderness and civilization." Wright separates this opposition from his "inside society/outside society" opposition with an important distinction:

...if by society we mean having roots, an occupation, and responsibilities, while by civilization we mean a concern with the money, tools, and products of American culture.

Wright talks about the "Indians" as being inside their own society but outside civilization. Similarly, the mountain men, like Spur or Jim, have their own society up in those mountains--the men basically kicking Jim out after his father dies at the beginning of the film, until Jim can prove his own worth and earn his way back (ironically, by stepping outside his "society" and heading into the other "society" in the low country). Wright specifies:

The East [i.e. civilization] is always associated with weakness, cowardice, selfishness, or arrogance. The Western hero is felt to be good and strong because he is involved with pure and noble wilderness, not with the contamination civilization of the East.

The hero of Banjo Paterson's poem is not only of the bush, but sets himself apart from the rest of the bush men by performing a feat--like Jim does in the film--that they cannot. The unnamed hero of the poem is "still so slight and weedy" but Clancy (making a cameo right out of his own poem, mind you) stands up for him, proclaiming "For both his horse and he are mountain bred." This is what we want for our heroes, of course--whether Australian, American, or otherwise--bigger than life, a callback to an older time, a better time. As Wright calls it, civilization contaminates. We live in it, we would really have it no other way most of the time, but we imagine we could survive in the wild if we had to, we imagine that men who do are better men than we. Worthy of romanticization, worthy of romance. Worthy of poetry and film. Our mythic heroes. Western heroes. Bush heroes. Action heroes. Super heroes. Whatever iteration we're using at any given time. They serve something bigger and older than civilization.