it means something to raise human beings

So, right away, a complaint: the introduction of the woobie is lazy. Kenny has presumably had the woobie for, like, his whole life. Alex knows not to mess with it, and probably messes with it all the time. But, Caroline warns him not to touch it, as if it's something new...

And, this is John Hughes writing, so I'm a little disappointed.

Of course, later moments, like the entire Rocky conversation, or the recipe sharing (though something about the scorching butter line feels off to me), or the poker game, make up for that. And, there are little bits all over this movie that are great examples of writing. The "disability" gag with Larry (Christopher Lloyd).

(Side note: I feel sorry for Tom Leopold, who plays Stan. He's in scenes with Michael Keaton, Christopher Lloyd, and Jeffrey Tambor, and I'm like, Who's this other guy?.)

Jack's growing interest in The Young and the Restless. The 220, 221 exchange. "I'm going to sleep on the fat couch, if I can fit through the door." And, coming back to the woobie, there's Jack trying to talk Kenny into giving it up:

I understand that you little guys start out with your woobies and you think they're great... And they are; they are terrific. But, pretty soon, a woobie isn't enough. You're on the street trying to score an electric blanket, or maybe a quilt. And the next thing you know, you're strung out on bedspreads, Ken. That's serious.

Mr. Mom builds itself on a foundation of sexist stereotypes but, as I said yesterday, it does so to deliberately tear them back down. The film celebrates mothers by running with the stereotypical father who cannot handle household chores or taking care of the kids... Until he figures all of that out. It plays with silly moments like Caroline cleaning up the table at her first board meeting or cutting Ron's steak for him without thinking about it; these moments are silly but do serve a purpose as well. Housewife Caroline (who has worked before, mind you) is programmed to clean up after people. It's ingrained after eight years at home, raising kids. 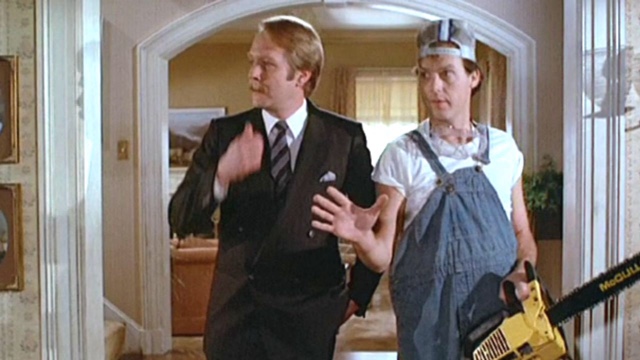 Same societal programming that has Jack feeling emasculated by losing his job, and comparing his manhood to Ron's (Martin Mull) even though he hasn't seen how Ron has been lusting after Caroline. Another man in his wife's life is a problem, because society says so.

It also allows us to laugh at some rather offensive bits, or appreciate the triumphant music when Jack gets his shit together. We shouldn't laugh at the affair jokes, or some of the role reversal jokes. But, we get to because we, too, have been programmed.

The movie works, still. Take it as in its time and place and it's reliance on sexist tropes aren't that bad.

Even though the economic and patriotic notes, especially in the end, paint the film into a corner the reifies the ideal American family by twisting it...

And, I think I said some version of that same sentence yesterday. But remember that in the end, Jack is getting his job back and Caroline has quit hers.

But, I guess kids still need a mother and a father and marriage is one man and one woman and all that programmed crap that I would get over sometime later. Mr. Mom movie tries to be subversive, but it's too busy trying to make jokes to really manage the subversion.