mr. bond is indeed of a very rare breed... soon to be made extinct

Shall we talk about Never Say Never Again?

Or shall I ignore Octopussy, playing now, to talk about the four other movies I watched today to finish off this year's Oscar nominated films, with a couple weeks to spare? Because, I totally did that. An extra day off, and this week is speech week in my classes, so I've got nothing to prep, so I ignored the olympics for today, ignored any Dungeons & Dragons planning I might need to make soon, and turned on three documentaries (Last Men in Aleppo, Icarus, Strong Island) and one foreign language film (On Body and Soul) (all conveniently on Netflix, hence putting them off to the end).

But, how about that Never Say Never Again? Actually, I don't intend to talk about the film itself. I think I only ever saw it all the way through the one time, in the theater. I was seven, mind you, and I knew about the copyright issues that led to there being two different James Bond films in the same year. Never Say Never Again and Octopussy. I wrote before about how Roger Moore was reluctant to play Bond a fifth time in For Your Eyes Only, and how Timothy Dalton had been (sort of) offered the part more than once before he would eventually get it. After For Your Eyes Only, Moore was again going to opt out. But, then Kevin McClory had retained the film rights for the novel Thunderball (already made into a. Bond film previously), and so a new adaptation (of a sort) of Thunderball went into production, and they had Sean Connery back even though he hadn't been in a Bond film for over a decade. So, the new Bond film being produced by Eon Productions couldn't afford to deal with introducing a brand new Bond and compete with an older one, so they got Moore back again (and I haven't even checked what got him roped in one more time with A View to a Kill).

All I knew, at the time, was that for some reason someone had separate film rights for Thunderball. What I didn't know were some of the specifics. Basically, McClory was hired in 1958 to write the feature film debut Bond film called Longitude 78 West. A few drafts and then financial problems got in the way. Cubby Broccoli got the film rights to the Bond novels and Eon Productions' first Bond film was Dr. No in 1962. Thing is, Bond's creator Ian Fleming used the Longitude 78 West script as the basis for a new Bond novel--Thunderball. McClory sued, because he had created elements of that story himself. McClory would get a producer credit on the eventual Thunderball film and retain the right to use his ideas from it in his own film after ten years had passed. McClory started announcing his competing Bond film in the 70s, "with titles like James Bond of the Secret Service and Warhead". Financial problems kept these from happening.Keith Abt, writing for Reel Rundown suggests that since "Connery's relationship with Broocoli and [Harry] Saltzman had been rocky throughout his years as Bond... One had to wonder if his agreeing [finally] to take part in a competing production was his subtle way of thumbing his nose at his old bosses." Connery coming on meant McClory's film would finally happen, and the world would get two different Bond films in 1983--one that acknowledged Bond as an aging hero, one that absolutely should have because there is no way Roger Moore should be hooking up with women as fast as he does anymore... To be fair, Magda (Kristina Wayborn) only goes to bed with him to steal the egg, but what is Octavia's excuse? (And, for the record, though I didn't say it yesterday, I know Kamal was deliberately acting against his Octavia's interests, it's just to fucking obvious, it's rather lazy filmmaking.) Anyway, "Connery was given input into the film's script and casting to sweeten the deal, and once he came into the picture the project finally found sufficient financing through a consortium of independent European production companies."

That last bit sounds like it's supposed to be strange, and maybe it was back in '83. But, look at any opening credits today and you'll likely see, especially on films out of Europe, half a dozen production companies at least, and I swear one I saw recently had close to 20. More partners, less risk, I assume.

In the 90s, McClory would try to make Thunderball again, calling it Warhead 2000 A.D. and intending for Timothy Dalton, who had just finished his Bond films for Eon, to star. He would try again in 1998, with Connery returning for Doomsday 2000, which would have competed with the Pierce Brosnan starring The World Is Not Enough. Christian Long, writing for Uproxx, says of this, "One thing you could say about [McClory], he was certainly persistent." In 2006, after McClory died, his family sold his rights back, and all the Bond films were together finally. 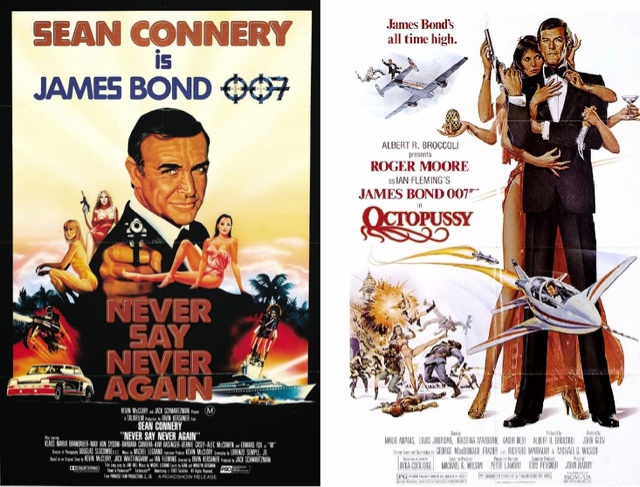 Meanwhile, Octopussy is about a rogue Russian general who wants to start World War III by setting off a nuclear bomb in West Germany without Russia getting the blame for it, which paints him as both devious and cowardly. Never Say Never Again has SPECTRE stealing nuclear weapons. Because it's 1983, nuclear weapons were all the rage.

(Side note: the coy framing to leave Octavia's face off screen when Kamal meets with her is weird. I mean, I know Maud Adams was in a previous Bond film--The Man with the Golden Gun--but putting off the reveal of her face only matters if 1) Hollywood doesn't regularly announce the stars of its film (and her face is on the poster, and was on the 45 we had of "All Time High") or if 2) she was playing the same character and it's a huge shock, but she's not, and it isn't. When you finally see her face, the big shock is those damn cheekbones, because those things look dangerous. But, anyway...)

And then, flash forward a good 35 years or so, and two of the documentaries I watched today (Last Men in Aleppo and Icarus) are about how awful Russia can be, in two very different ways--respectively, bombing civilians in Syria and cheating in the olympics for decades. But hey, at least we aren't afraid of them blowing us up with nuclear weapons anymore. We've got North Korea for that now. Although, Russian hackers could totally be a subplot of a new Bond film today, if we wanted to bring back big bad Russia.

But still have Octavia and her all-female fighting force, because that would fit into the present zeitgeist pretty well.

Also, bring back Grace Jones. Or just crossover a new Bond film with Black Panther because that South Korea sequence and all of Shuri's gadgets would fit the Bond universe pretty well.

Or just stop making James Bond films, stop pretending that one hypermasculine, superintelligent, multi-skilled secret agent can save the world time and time again, because if it were that easy, the world would not have so many problems.

Unless Bond is literally the only agent this capable...

But, I write that as he rather stupidly scares the guys who think he's a corpse in a body bag when he should know damn well that they drove about 5 seconds outside the property and there are no doubt people watching. I mean, surely, James Bond can survive getting thrown down a hill onto some bones and left for dead. And, you know, not immediately getting everybody nearby to hunt him. But, at least he gets to tell a tiger to sit, which is silly, and yell like Tarzan, which is dumb. So, he's got that going for him.

All these 80s films with supermen at the center--they're just so painfully obvious about what they're saying, with all their racist under- and overtones, their sexist bullshit, and their constant need to reify and reinforce the patriarchy.